You hear the same stuff every darned week. "You need to get a good start. You need to sprint on the first few laps."

And yet, the two dynamos of this year's fantastic 250 National title chase did the opposite. We didn't see much of Blake Baggett and Eli Tomac early in the motos this year, but when they did kick into sprint mode, late in the race, they showed otherworldly speed. Like, running-past-dudes-who-are-jogging speed.

Tomac had that kind of sprint in him at the last few races, and he needed it again at Lake Elsinore, where Baggett clearly had refound his early-season mojo. In moto one, Baggett turned it up at the halfway point (as usual), got around Justin Barcia, and started pulling away. Tomac needed a few more laps to get Barcia, and he sat six seconds behind Baggett. He needed to get desperate…and he did by uncorking an amazing 2.41.7 lap, a full four seconds faster than Baggett at that point. But, Tomac had gone into "go until you blow up" mode. He couldn't maintain that pace, hit his redline, and then drifted into 2.46 and 2.51 laps after that. 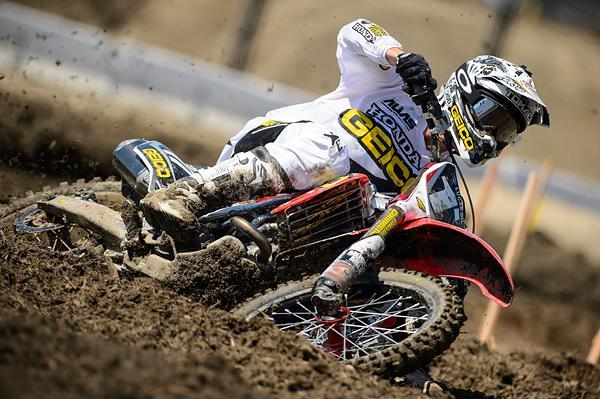 Eli Tomac left it all on the track at the season finale at Lake Elsinore.
Simon Cudby photo

"Yeah, I had pretty much hit the redline the lap before that," said Tomac. "So I decided to just go and give it all I had! That was pretty much it!"

Tomac went off the track momentarily, and then pulled his goggles. He was overheated. Baggett maintained his laps at the 2.45 level until the end, and held on for a moto win that pretty much put the 250 National title on ice.

While that moment pretty much sealed Tomac's fate, it did it in the most noble way possible: he went down fighting. He pushed as hard as he could for as long as he could. He left it all on the race track. And besides winning, that's about as good as it gets.