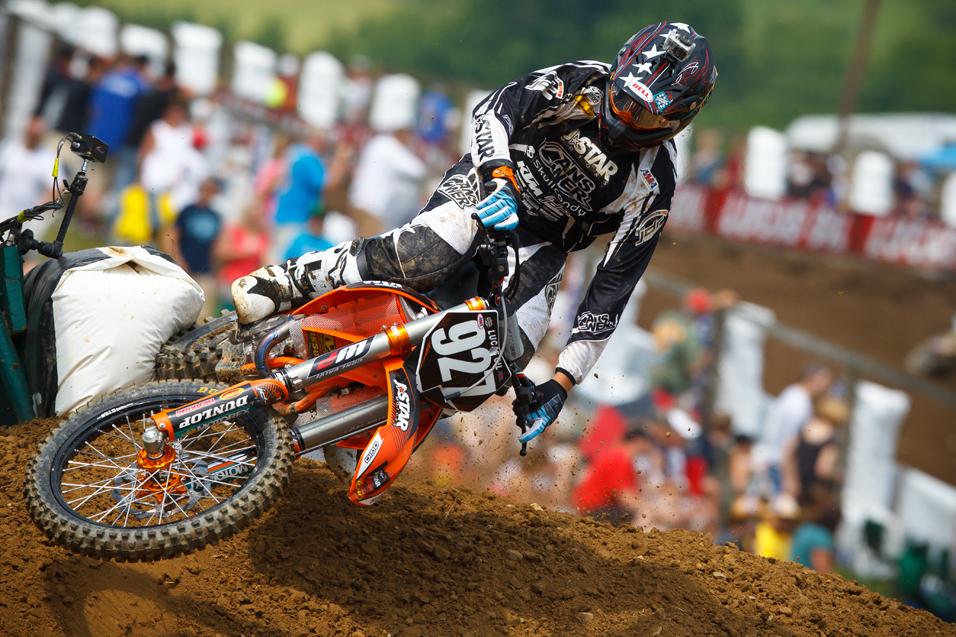 Long Journey Back
It’s been a long, injury filled road for 2008 Horizon Award winner PJ Larsen since returning to the States after winning the Australian supercross and motocross championships in 2010. (Click here to read The Trials and Tribulations of PJ Larsen) And after another injury plagued campaign, which has seen Larsen on the sidelines since the Toronto Supercross with a torn ACL and foot injury, Larsen and J-Star JDR KTM will part ways after the season. But Larsen is out to prove he’s still a contender in the last two rounds. Larsen has mild expectations going into Steel City after only being on the bike since the beginning of the month, as he expressed earlier this week. “Go out and do my best,” responded Larsen when asked what his expectations for this weekend were. Will Larsen be able to find his form and land inside the top-15?

Blose Returns
The last time we saw former Hart and Huntington rider Chris Blose was at Hangtown, trying to qualify for the season opener on a PulpMx-backed YZ 250. Although he failed to qualify, he did give the rabid two-stroke fans something to cheer for. The Arizona native is back this weekend on a Honda 450 with hopes of qualifying for his first National of the season. Will Blose be able to overcome the long layoff and contend for a spot inside the top 20? 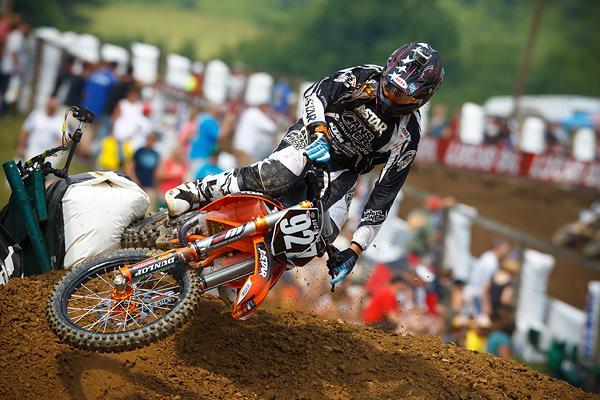 PJ Larsen is back in action for the first time since Toronto.
Simon Cudby photo

On the Clock
Since transitioning to the 450 Class at Southwick after he and Eleven10 Mods went their separate ways, Phil Nicoletti has quietly put together impressive back-to-back performances. The only thing that has slowed the New Yorker down was a bike problem in the first moto at Southwick while running inside the top 10. In what will most likely be his last race of 2012—Nicoletti doesn’t have the funds to travel to the season finale at Lake Elsinore—Steel City will mark the last chance for Nicoletti to prove he’s worthy of a ride in 2013.

Homecoming Part II
Conveniently located just 55 minutes south of Steel City in the small desolate town of Uniontown, PA, Eleven10 Mods Honda will have the hometown support for the second time this season—the other being High Point, located in Mt. Morris, PA. With Beaver, PA, native Mike McDade now on the team, the fan base at Steel City will clearly be behind the local product. Let us not forget about Alex Martin, either. The Minnesota native enjoyed one his best races of the season last year at Steel City—eighth overall—and is coming off solid performances at Southwick and Unadilla. These boys know how to ride the Pennsylvanian dirt, so don’t be surprised to see them near the front of the pack at Steel City.

Where it Began
Last year highly touted amateur sensation Kyle Peters made his delayed pro debut (Peters injured his T-10 vertebra at Loretta’s prior to Unadilla) at Steel City surrounded by hype after upsetting GEICO Honda’s Justin Bogle for the 250 A title at Loretta’s. But after an injury-riddled rookie season, Peters has lost his spot in the limelight. With a lot still on the line, can the North Carolina native regain his mojo back where it all began? 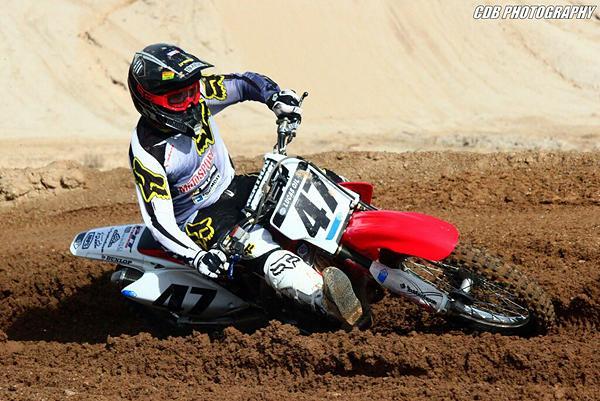 Overdog
While Ryan Dungey was victorious at Steel City on a 250 in 2008, a premier class win has eluded him there. In 2010 he DNF’d the first moto with a broken brake rotor, and last year he was bested by Ryan Villopoto in both motos. While betting against Dungey this weekend doesn’t seem like a winning proposition, there’s always a chance he could suffer more weird luck like he did in 2010. But unless the race gremlins make an appearance, expect Dungey to finally take the first 450 Class Steel City win of his career on Saturday.


Cunningham’s Back
It’s been a rough year for Star-Valli Rockstar Yamaha’s Kyle Cunningham. He fractured his wrist in supercross and kicked his National season off by injuring his ankle at Hangtown. He attempted to ride through the pain, but when he caught his foot in a rut and did further damage to his ankle at Budds Creek, Cunningham was forced to take some time off. Now that he’s healed up, he’ll be racing the final two rounds of the season. How will KC do at his first race back since round five?


Do or Die
When the series was set to roll into Southwick and Unadilla, two of Justin Barcia’s strongest tracks, it was expected that the GEICO Powersports Honda rider would cut a significant chunk out of Blake Baggett’s point lead. The opposite happened, and with just four motos left in the season, Baggett holds a 24-point lead over Barcia, with Eli Tomac sitting an additional four points back. Barcia is now in a situation where he’s going to need a little help from Baggett if he wants to close the points gap, and a perfect 1-1 showing this weekend is a must. Will Steel City breathe new life into GEICO’s title hopes, or will Baggett pound another nail into Barcia’s championship coffin? 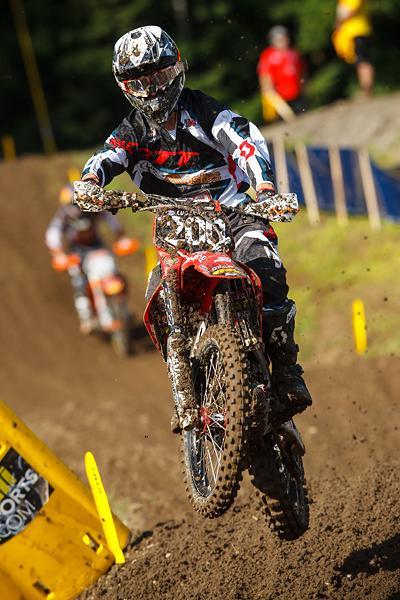 Eleven10 Mods and Mike McDade will feel right at home at Steel City.
Simon Cudby photo
Keeping it Rolling
Ken Roczen and Marvin Musquin both had breakthrough weekends at Unadilla, and both just re-signed with KTM for two more years. Roczen took his first moto win stateside, while Musquin finally secured his first, long overdue overall victory. There’s nothing more addictive and motivating than winning, but with the series headed to Steel City, a much more American-style of track, will the two Europeans be able to achieve more success this weekend?


The Snowman
Ten-time Winter X Games medalist and current Snowcross World Champion Tucker Hibbert will be making his 2012 debut in the 450 Class at Steel City. He originally hoped to race RedBud this year, but a moderately lacerated kidney and bruised pancreas suffered in a snowmobile crash forced him to postpone his return to professional motocross racing until this weekend. Hibbert’s best finishes at Steel City have come when he placed twenty-second in 2006 and 2008 on a 250. How will the snowmobile specialist do on a 450?
Presented by:
Read Now
November 2022 Issue Now Available