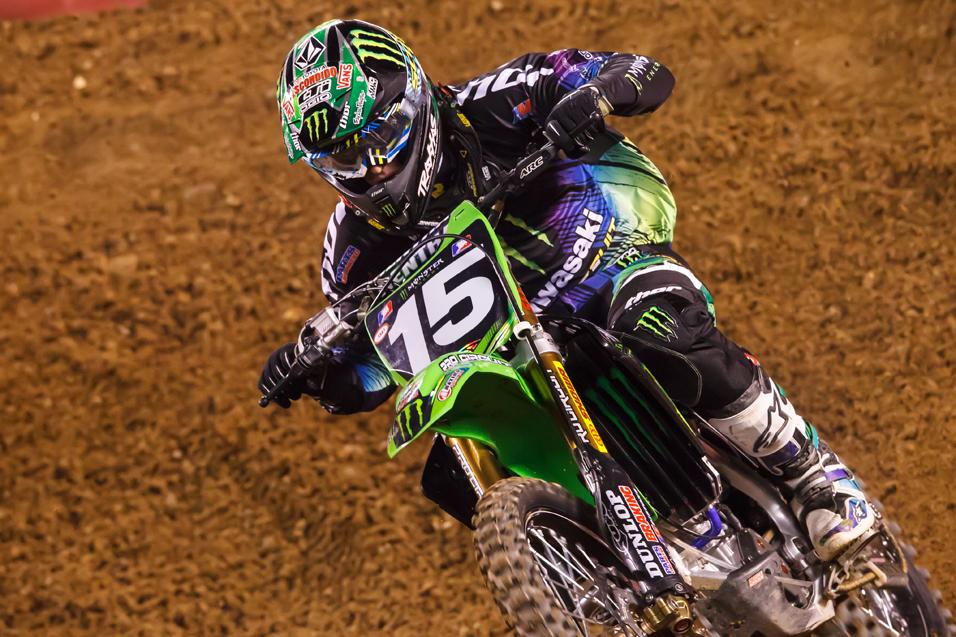 August 27, 2012 1:50pm
Steel City Raceway Delmont, PA Steel City Lucas Oil AMA Pro Motocross Championship
Steve Matthes (Recovering Wilson-is-from-Canada fanboy)
It’s taken a very long time but finally, Scottish-born American motocross hero Jeff Ward has begun his very quiet, stealth-like assembly of a Scottish super team to dethrone the Americans. I would guess that Wardy probably wanted to race alongside the wee lad when he was the number one motocrosser in the world but the timelines just didn’t match up. Well folks, the second Scot to rise to moto prominence finally arrived and Jeff Ward Racing snatched him up like Haggish hot off the stove.

I don’t even know if Haggish is cooked on the stove actually.

Dean Wilson to JWR has been a badly kept secret for a while now but I suppose we can talk about it because, well, Dean finally talked about it today in Monday Conversation. And in the end, all these other guys that refuse to talk about their new deals out of fear of some sort of retribution or respect to their old teams is sort of silly. That’s two things that I admire Dean for now--one is just talking about a upcoming contract and two is never following anyone else on Twitter.

I’ve gone on the record as stating if I was Wilson, I would have stayed down in the 250 Class another year as he’ll make a ton of money either way, he’s never won a 250 SX title (and with five career wins, he’s second on the all-time 125/250/Lites SX wins list for guys to not win a title, behind Jeff Emig--who has 6 wins) so he can try again to do that, he’ll be a top guy in the Nationals and then he can move up to 450’s next year where he will be exactly where he is now. Highly paid, a rising star in the class, etc, etc.

But Wilson feels like he’s too big for the bike and just wants to move up, so here we are. As a member of the Wardy Racing Team, he’ll have a factory Kawasaki under him and that’s a good start. The contract Dean signed is a big one, Ward Racing is definitely bucking up as it were so good for Wilson as he sets off on this new career path. I think Dean is great rider, he’s a hard worker and he’s going to be fine provided his double shoulder surgery has worked and he’s all good to go.

Wilson is also moving to Florida to base himself there and on a recent Pulpmx Show, he mentioned that Chad Reed has invited him to go ride out there so he doesn’t need his own property and all that. We’ll see how long that lasts as Wilson, in my opinion, will be someone who Chad has to watch for out on the track and these things never work out. See Reed, Chad vs. Ferry, Tim or Carmichael, Ricky vs. Lusk, Ezra as examples of riding “buddies” that soon turned sour. But hey, while it lasts Dean can pick some things up from Reed.

Wilson’s going to be right into the front five or six guys and maybe even sneak a win in here or there. The absolute best part of all this is he’s following his buddy Justin Barcia right up into the 450’s and these two are so close in speed that I predict we’ll have 17 more SX rounds of Bam-Bam and the Scot trying to take each other out! Good times indeed.

David Pingree (All-time Jeff Ward fan)
This is a great move for Dean, for JWR and for the sport in general. Wilson had nothing to gain by staying on a 250; he already won an outdoor title and he's proven he is fast indoors he just couldn't quite secure a championship. By moving up he immediately puts himself into the upper echelons of the sport where I believe he will excel.

For Wardy this is a huge step for the team. There is no question that they have the staff and equipment needed to win over there and Wilson is a rider who could help them get to the top of the box. It also makes it much easier to get better (factory) equipment when you have a guy like Wilson signed. That's not meant to disrespect Grant or Chisolm but Deano is one of Kawasaki's long-time team green boys.

And if this pairing can produce results it will end any stigma that JWR is not up to par with the factory teams because they are "new", and add another great home where top riders can be successful and win races and titles. The addition of teams like JWR, JGR, TwoTwo Motorsports, Langston/Witt Racing, BTOSports.com, etc is critical so that riders have a place to go when they've done their time in the 250 Class. If you flash back ten or fifteen years the only teams outside of the factory race teams that even existed were Moto XXX and Yamaha of Troy (and YoT only occasionally fielded a 250 rider). Now, if you are ready to move up you have multiple options that will put you on very competitive equipment and give you a chance in the premier class. This frees up rides in the 250 Class as well, which allows more young talent to be showcased. It's a win-win.

Good luck to Dean and Wardy this year. It sounds like they have some cool things happening and Wilson is focused on making a splash into the 450 Class. He has a camp setup down in Florida where he can limit his distractions. And knowing Jeff Ward he has gone far to long without winning races so he's chomping at the bit to get going. Now, who will be Wilson's teammate?

Chase Stallo (Dude who writes, posts everything, and reads everything on this site. Commenters, beware.)
It looks like we have a new player in town. With Jeff Ward Racing winning the Dean Wilson bidding war, the gauntlet has been dropped. They want to win, and they want to win now. While the team is still in its infancy, remember Mike Kranyak (the “M” of the now defunct L&M Yamaha team) and most of the crew that won back-to-back supercross championships with Chad Reed and James Stewart in 2008 and 2009 are part of the mix. And let’s not forget that the owner of two X Games gold medals, seven AMA national championships, 56 AMA wins, AMA Motorcycle Hall of Famer and part of seven winning Des Nations teams, Jeff Ward, is at the helm. This team is capable and Dean is obviously a great rider.

One question that has yet to be asked is where does this leave Toyota/JGR Yamaha? After losing Davi Millsaps to Rockstar Energy Suzuki Racing and failing to land Wilson, (they reportedly made a big push to get him), where does the team, and Yamaha, go from here? Rumors have begun to swirl that Justin Brayton will make his return after a year with American Honda, but who else is on their radar? With the silly season off to an early start, the pressure to land a budding young star is starting to build earlier than anticipated for many teams.

Also, who will join Wilson on the JWR front? Josh Grant signed a two-year contract with the team, and has quietly had a very productive season. But we all know two-year deals in this sport don't always last two years. Do they keep Grant on and go with the Grant/Wilson duo? Seeing as the Christophe Pourcel rumors are essentially dead in the water right now, it certainly looks like the best option at the moment.
Read Now
November 2020 Issue Now Available