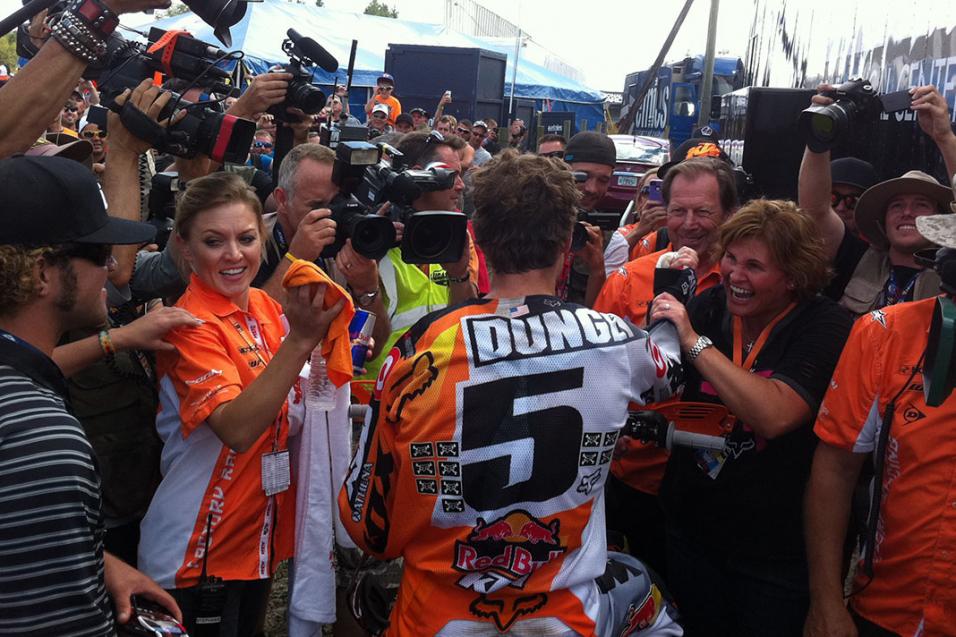 As Ryan Dungey rode into the history books on Saturday as KTM's first premier-class champion on the U.S. SX/MX circuit, behind him was a trail of tears. On a brutal Unadilla track, made rougher and meaner by a long rain deluge on Friday afternoon, bikes and riders were scattered around the circuit. No less than four different leaders in the 450 Class—Michael Byrne, Jake Weimer, James Stewart, and Broc Tickle—had either dropped out or been overtaken by the relentless Red Bull KTM of Dungey as he raced to the first-moto win. And the one man who still had a mathematical chance to beat him, MotoConcepts Suzuki rider Mike Alessi, suffered a broken water-pump valve that caused him to pull off early.

Dungey himself, the series points leader since the third round, crashed in the early going and had to come forward from deep in the pack. It was a heroic effort for the soon-to-be-crowned champion, who finally passed the impressive Tickle at the very end of the moto.

Ryan Dungey has made a career out of taking full advantage of every opportunity afforded him. When he was plucked by then-Suzuki team manager Roger DeCoster out of the 125cc Schoolboy ranks to be Ricky Carmichael's heir apparent, he overcame the pressure to reach the top in 2009 with the Lucas Oil AMA 250 Motocross Championship. He won both the AMA Supercross and 450 Motocross titles in 2010, only to lose both to Monster Energy Kawasaki's Ryan Villopoto the following year. 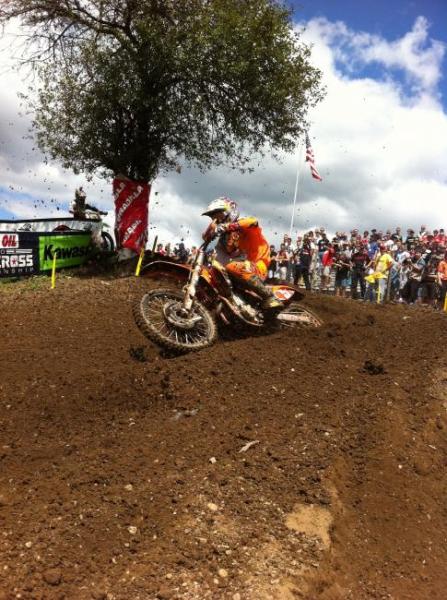 Dungey took advantage of his opportunities at Unadilla, much like he has done throughout his pro career.
DC photo

He also lost Roger DeCoster in 2011, as The Man took his managerial skills to KTM, as well as master technician Ian Harrison. The Austrian brand was trying to finally make a dent in the U.S. motocross market, specifically in Monster Energy Supercross. Dungey got them partway there, earning the brand its first AMA Supercross podium at the Anaheim opener, and then its first main-event win one week later in Phoenix. Of course he did not win the title—Villopoto repeated as champion—but he finally got a KTM into the championship mix. Many men had tried and failed to accomplish that inside U.S. stadiums.

Outdoors, the opportunities were better. KTM has a long history in Europe of winning world championship titles, going all the way back to Gennady Moiseev in the mid-seventies (when the bikes were actually red, and then white). And with Villopoto, Chad Reed, and Trey Canard out, Dungey was in a good spot. The man to beat would be James Stewart, as the results proved at the first two rounds. But then James crashed hard in Colorado after a photographer crossed the track at the wrong time, and everything shifted Dungey's way. He has not lost an overall since, sweeping a Carmichael-like eight straight races en route to a very early championship.

Saturday was the best day ever for KTM in America. With help from Marvin Musquin and Ken Roczen, the Dungey-led Orange Brigade won both classes and three of four motos, as well as the 2012 Lucas Oil 450 Motocross Championship. Yet Ryan Dungey's best day ever may be ahead of him. Having reclaimed his outdoor crown, he is now likely setting his sights on the battles to come in 2013 Monster Energy Supercross and the opportunity to get KTM what it has long coveted: the AMA Supercross Championship.

Congratulations to Ryan Dungey, his family and sponsors, and everyone at Red Bull KTM. 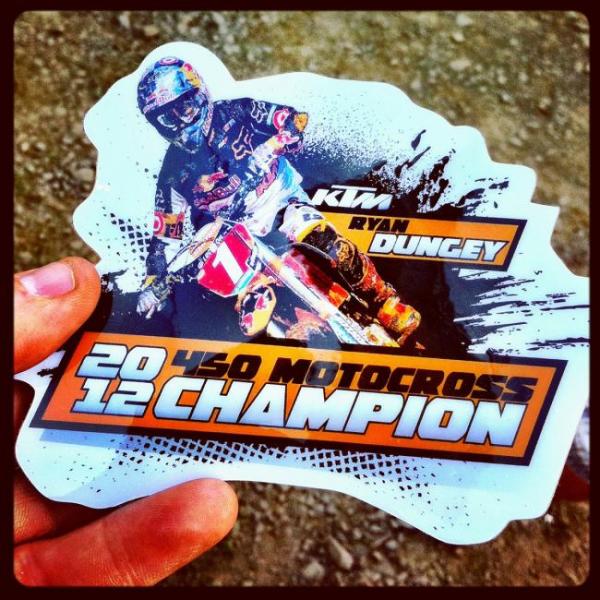