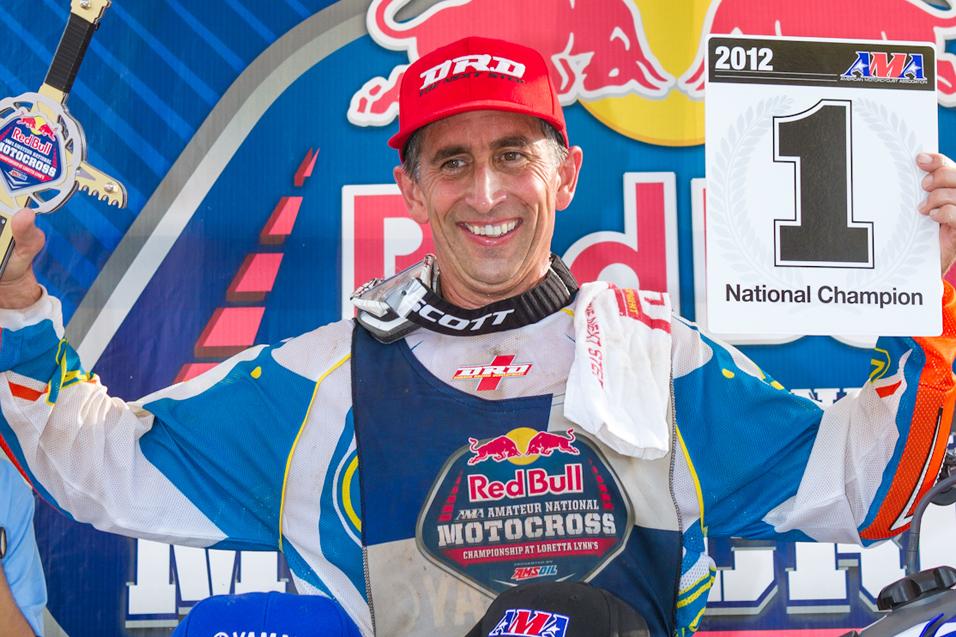 Advertisement | Advertise with Us
Loretta Lynn Ranch Hurricane Mills, TN RedBull AMA Amateur National Motocross Championship (Loretta Lynn's) Amateur National Motocross Championship
Former Yamaha factory rider Doug Dubach never actually retired from this sport, and although his racing, riding and testing days aren’t quite as frequent as they once were, he’s still fast when he needs to be. This year, at age 49, he managed to win both the 45 Plus and 40 Plus titles at the Red Bull AMA Amateur Nationals at Loretta's, pulling out a tough victory over Mike Treadwell in a third-moto showdown in 40 Plus. The personable Dubach loves to talk, so we hit record at closing ceremonies from the Ranch.

Racer X: Pretty good week, and you kind of had the deck stacked up against you the way your age worked out.
Doug Dubach: Yeah, and this race is crazy because you never know who is going to show and up be ready. I saw [Barry] Carsten at the Regional, and I saw all of these guys, and I was like 'Man, it’s going to be on.' Then I guess Keith Johnson had something happen and he couldn’t race, so all of a sudden it’s this other group, and they’re all fast. You know, I battled Destry [Abbott] at the Regional, and we went at it! I’m like 'It’s going to be on at Loretta’s.' Maybe my experience here kind of helped me, because I was able to beat him here, but Treadwell has obviously been training hard. I have to get out of my office chair a little more before I come here, because these guys are after me!

Well, what is your schedule nowadays? We all think of you as the guy that rides and tests all the time. Is that true any more?
It’s very different than what it once was. Three or four years ago I had the golden life, I tested with Yamaha and Dunlop tires and everybody, but budgets have changed and shrunk and things are different. And, my kids keep getting bigger, and now I have all-stars in just about every other ball sport. My kids are this good, Loretta’s good, just in different sports besides motorcycle racing! So weekends, they’re a giveaway doing stuff with the kids, so I have to sneak out to Milestone for riding at night here and there during the week. I’ll sneak the boy out with me. He almost qualified for here, he was an alternate in the 50 class, he got to practice so he was pumped, but he didn’t get to race. So yeah, for me it’s a very different life than it was a few years ago. 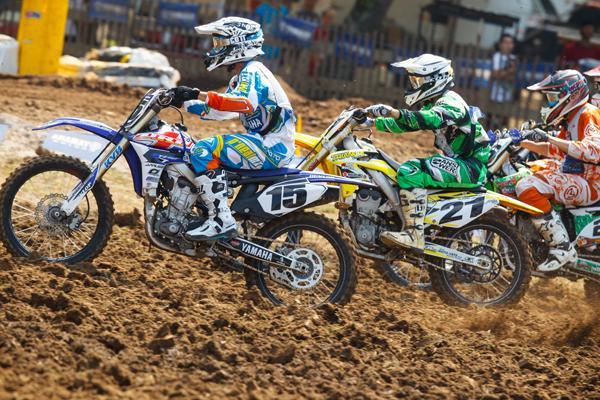 So no one can say you win because you get paid to ride?
Not unless I write myself a check! I do still test for Yamaha, but that’s two or three big chunks of the year, it’s not consistent anymore. I do Mammoth, I do my Vet Race in California, and I do a two-stroke race, so I don’t go over the gate more than a few times a year anymore. I think that’s why it takes me a few motos here to get going. Like I said, my weekends aren’t spent at the race track anymore, it’s at a soccer field! I think what helps me is that I never removed myself from it too much, I never retired, I stayed fit, I still love riding my dirt bikes. I started late, I didn’t race my first race until I was almost 15 years old! I think that helps, maybe that’s it, or maybe it’s just my personality, whatever it is I just never got out of riding.

Take me through that final 40 Plus moto, you and Treadwell were tied going in. Were you nervous?
You know what, I was excited! Like I talk about in my seminars, I put myself in a great state of mind, I was just pumped and positive that whole race. I had a little problem, no body knew, but my front brake started to go out. That last lap and a half we got into lappers and it got tight, I have the marks on my boots he was so close to me.

You said you and Treadwell battled before?
Yeah, in 2000 in the Canadian Nationals, I dominated that series that year, be he and I had some motos! I remember one moto, I didn’t realize it was him, we were just back and forth the whole time, for like third or something! It was awesome. I love that guy, even though he ran into me twice on that last lap, we were laughing about it on the podium! I love the spirit of these guys. If it weren’t for people like him, and John Grewe, I wouldn’t have a great time here. To race like that, Grewe kept me honest all week in that 45 Plus! It was awesome! 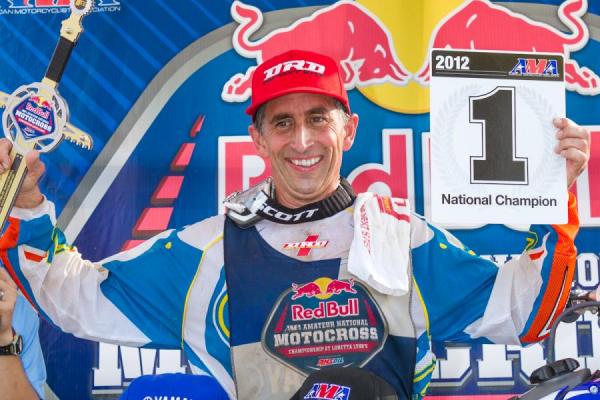 All smiles for Dubach after his 40 Plus and 45 Plus titles.
Mark Pearson photo

You didn’t start racing here until you were over 40 in 2006, and you’re having so much fun with it, do you wish you had started coming here earlier?
You know, now that I know how fun it is, I really wish I did. It’s such a great event. My kids love it! Last year we didn’t come for a few reasons, and my kids were more mad about it than me! They talk about this being this great motocross vacation, and it really is. Last week we took a vacation on the American River up by Hangtown, we were out in the rapids having a great time, and they were like, “Yeah but next week at Loretta’s, it’s going to be even better!” They got to ride the BMX bikes, drive RC cars, jump into the creek. And my daughter, it’s always her birthday here so she gets special treatment, and my wife, she loves the hot weather, so even she loves it here! I say it on the podium every time: I’ve raced in motocross races all over the world. I’ve raced in over 20 countries, I mean what I say, this is an outstanding event. I’ve got kids at three different ages, and they all have a great time. I hope I’m healthy enough to keep coming back and back and back, because I absolutely love this event, and I love riding and racing dirt bikes.