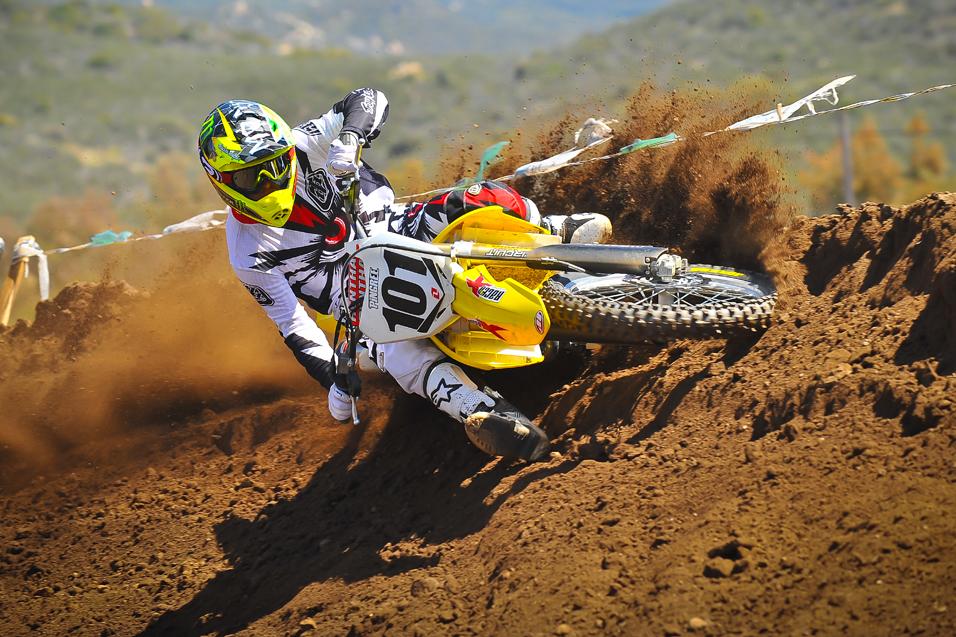 I’ve noticed that sometimes the smaller bikes are posting faster lap times. Are the little guys really faster out there and would they be able to race against the big bikes and actually win? Or is just that the track favors less horsepower and the saying “there is no replacement for displacement” is just not true when talking about motocross? I somehow find that hard to believe but I’m not racing on pro tracks either.

Back in the two-stroke days this would have been a shocker. There might have been days where RC or James were right there in lap times with the top guys in the premier class but it was much more difficult to do. The current 250cc four-strokes are so fast that there are only certain places where they give up time to the 450’s. And because the 450 is so much heavier and difficult to control at that speed you are going to see lap times like this where the 250’s are going faster. That’s one of the cool things about motocross…that old car racing adage you quoted doesn’t always apply because we have to factor in bumps, ruts, tight corners, hills, etc that can sometimes slow a bigger bike down more. Does that mean that Blake Baggett should move up immediately and begin killing Dungey and everyone else? I’d pump the brakes on that move just a little. However, I tip my cap to him for circulating the track faster than any other rider all day.

I can't help but notice on the Pulp MX show and other podcasts that the pronunciation of "Des Nations" is always said like "Dez." But that's not really the proper way to say it, because it's really said like "day" in the French language. Catch my drift? Knowing your far-right political views and red-blooded racing experience, you detest the French for their girly-sounding language and effeminate style, but can you comment? I know you, like many racers have traveled the world and likely exposed to the proper pronunciation of "Des Nations." So is it Dez or Day and do we sound silly to the world saying it wrong? Or should I care?

Enjoy some Freedom Fries for me. Cheers.

That is a point of much contention. No, I’m not talking about whether or not the French are socialist sissies. What is the proper pronunciation of the Motocross des Nations? Or is it Motocross of Nations? Or do those mean the same thing? If I weren’t such a gluttonous, ignorant American I might know the answer to that. Nonetheless, your question is about the proper way to say it and I’m just going to tell you that the proper way to say it here in the States is Motocross of Nations. If you want to be all “Frenchy” you can try throwing out a “Motocross Duh Nations” but you’ll only expose yourself to be a giant bag of douche. That’s like the guy who makes pasta dishes and then really throws on the Italian accent when he says rigatoni or tortellini or mozzarella. That guy is an ass; I don’t care if his family really is from Sicily.

Thanks for writing in, Jason. Freedom fries for everyone… Super size!

There have been some pretty funny butt patches over the years, like Dungey's patch that appeared to say "fart" this weekend at Washougal. What are some of your personal favorites and/or what patch would you run?

First, you insensitive bastard, that patch was run in honor of Art Jefferson who passed away last week. He was part of the motocross family and crew that makes the Nationals happen every weekend and he will be greatly missed. Godspeed, Art.

Now, in any other situation this butt patch would be pretty funny because at first glance it certainly does look like “Fart” and if there is one thing that always makes me laugh it’s a fart or any inappropriate use of the word. Some of my all-time favorites are Jimmy Button’s “Periscope” and “Monkey” patches that he used to run. It was funny because he was long and lanky and his neck is unimaginably long. If I were running a butt patch these days it would be DP101 so that I could fit in with all the cool kids. I know it’s about as innovative as skinny jeans and any show with the Kardashians but that’s what everyone is doing. Then I would Twitter about it and put pictures on my Facebook and Instagram and then post a blog about how to repair a torn butt patch on Pinterest. Wow, kids are dorks.