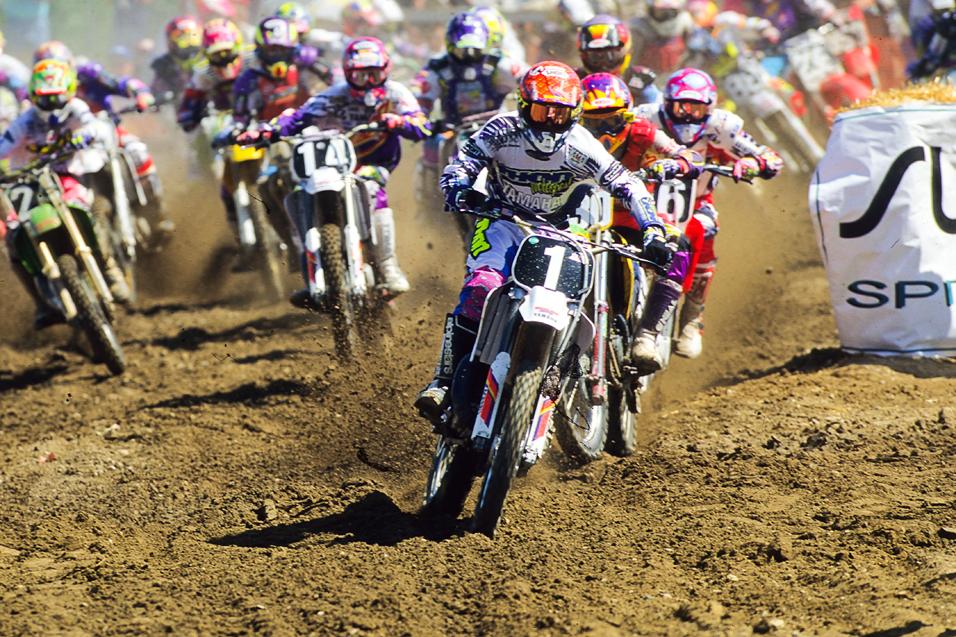 July 26, 2012 4:50pm
by: Aaron Hansel
A few weeks ago we ran a Rewind feature with Buddy Antunez, which you can find here. In the interview, Antunez dropped some amusing insight on Jeff Emig, and since we here at Racer X Online place a high value on being neutral and balanced, we decided it was only fair to give Fro a chance to settle the score with a Rewind interview of his own. So buckle up and enjoy as Emig reminisces about Seth Enslow, Frezno Smooth and getting gasoline on his crotch.

Fights on the Track

It seems like I used to get into it all the time in the early days of supercross. I believe it was 1993 at the San Diego Supercross, I got a good start and had a podium ride going. Mike LaRocco was behind me, it was kind of a muddy night, and let’s face it, I was riding a wide bike and not letting him by. He kept trying everything he could, and eventually he jumped and landed on top of me going into a turn. It completely crushed us. The way I looked at it, I had a podium finish going and I was going to get a bonus that night. I got up, he was laying on the ground, I believe he was trapped under his bike, and my reaction was to kick him as hard as I could with my boot. So I kicked him as hard as I could in the ribs. It should have broken his ribs, but it didn’t even faze him! Later when I was pulling off the track, I started arguing with his dad, who was his mechanic, and I was pointing at him in his face. He grabbed my hand and twisted me off my bike. I landed right in a big mud hole! And he practically broke my wrist!

Later on I was in the Yamaha rig, and LaRocco came in. As I remember, it was just him and me in there, and I remember thinking to myself, “This is the part where you get punched in the face.” Fortunately, he didn’t hit me in the face, although I’m sure that he wanted to just pound me. We had some words, the AMA called us in, we both said everything was cool and that was that. 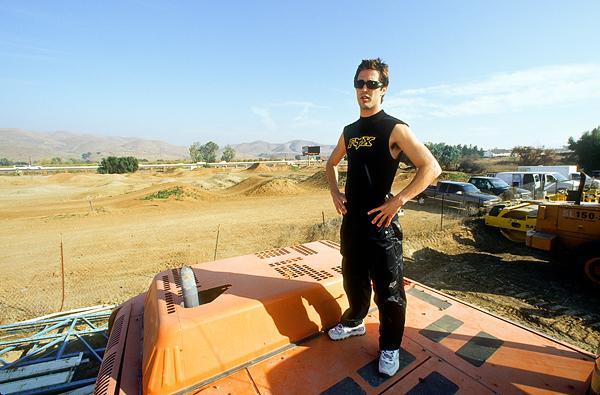 It was all a blur.

In the early days of Shift it was cool because it was so loose and we could do whatever we wanted. The very first shoot that we did, we had a sample set of a jersey and pants, and that was it, so I just shot it without any shoes on or anything. Later on, when we started doing all the sportswear shoots and everything, heck, we were having cocktails the whole time. Those were pretty fun.

I’ve never had a hangover.

The whole project was crazy. It was the first time we had had a script, and it was going to be a full-length movie. The fact that they wrote all of the parts to fit Mike Metzger, Seth Enslow and myself, and the whole other cast of players, was awesome. It took us so long to shoot; it was months and months and months of shooting. Then, when the finished product came out, everyone in the industry, like the core people from Motocross Action, they thought we were losing it, like we were trying to ruin the industry. They hated it, everybody hated it. Now, it’s like, the most popular movie. Every race I go to, I hear someone yell, “Yeah, Frezno Smooth!” For the motocross industry, it’s got that Dazed and Confused vibe. It’s got a lot of great one-liners, and I’m proud to be in it. 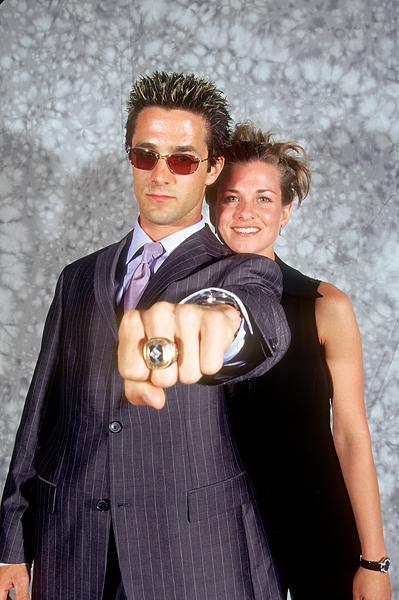 My best Seth Enslow memory came from the Glamis sand dunes. We were out there on President’s Day Weekend, a whole bunch of us. Jeremy McGrath, Ryan Hughes, Phil Lawrence, Buddy Antunez, Jimmy Button, and we were doing the biggest jumps ever, for that time. We were doing this one pretty technical jump in an area with massive amounts of people. Next thing you know, we’ve got thousands of people watching us. I’m standing by the landing, and a buddy of mine yelled, “Get out of there, Seth is coming!” So I ran away from there and over to the takeoff, because the takeoff was really tricky and I wanted to see how he handled it. Over the riser came Seth, and he had it pinned. His bike was the biggest piece of junk ever. He hit the jump and instead of fading to the right and hitting the landing, he stayed to the left, and that’s the classic shot from Crusty Demons of Dirt 2, where he landed on that three-wheeler and all those bikes. Everything just exploded and people went everywhere. He got back up like it was no big deal! A couple of bikes were ruined, but that was it. The guy was crazy back then, he had some balls. I wouldn’t have hit that jump on his bike!

My most memorable moment at the MXoN comes in the form of a defeat. In 1994, when we were in Switzerland, we team didn’t win—and the U.S. had not lost the event for 13 years. I went 2-2 on the day, Paul Malin beat me on the 125. I felt I should have won, I felt I should have beat him. Mike LaRocco and Mike Kiedrowski were teammates, and the motos just didn’t go well enough for us to win. For me personally, it was the biggest defeat ever. I have never been that disappointed in my life, with anything that I have ever done in racing. I knew that I was part of the team that lost it for the first time. It was pretty emotional. It hit me hard. I should have won. 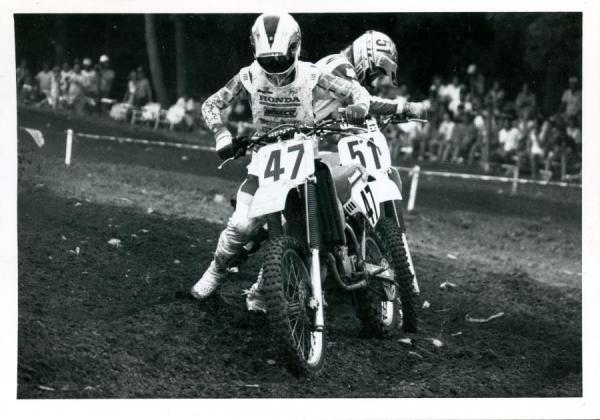 Emig and Bradshaw going bar to bar at Loretta's.

My first year on a 125, I had to race Damon Bradshaw in the 125 B Class. He won the first two motos, and in the final moto he had a flat tire or something. Over a jump, he came across on me and we both crashed. He got back up and got going, but I had a punctured gas tank and gasoline went all over my crotch. I don’t know if you’ve ever had gasoline on your crotch, but it’s not good. So I was doing everything I could to pull my pants off. The flagger that was there had a big cooler full of cold water, and I had my pants down and I was pouring cold water on my balls in the middle of the track. I may have got some in my eye too. Good times!