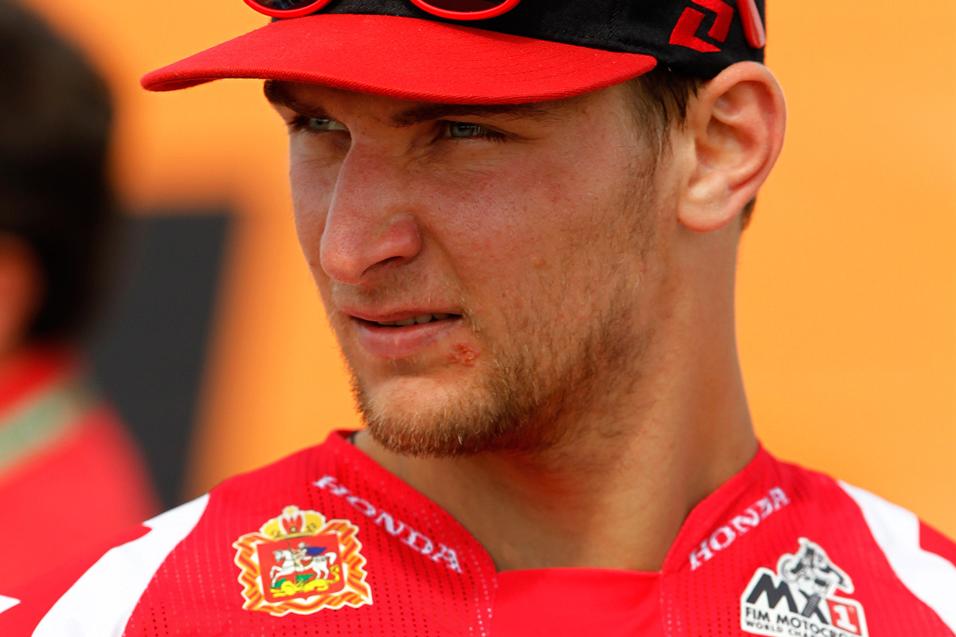 Build it and they will come; or something like that. The Grand Prix of Russia was re-born ten years after a stilted effort outside of Moscow and the new sandy, rough, short and jumpy Semigorje circuit welcomed a weekend attendance over the 40,000 mark to prove the rude health of the sport in this neglected corner of the globe.

Factory Honda rider Evgeny Bobryshev became the first Russian winner of a Grand Prix for 31 years last summer and the 24-year-old was mobbed wherever he went around the basic but perfectly adequate complex 300 miles further east beyond the capital city.

The eleventh round of sixteen in the series almost closed the eastern European stretch of the calendar (some teams will stay on the road and head directly to Loket for the Grand Prix of Czech Republic in two weeks) and it produced another Red Bull KTM double act with Tony Cairoli going 1-1 in MX1 and Jeffrey Herlings repeating the scorecard in MX2. Both the Sicilian and the Dutchman have racked-up four doubles and six triumphs and there was no one who could match them in a hot Russia. 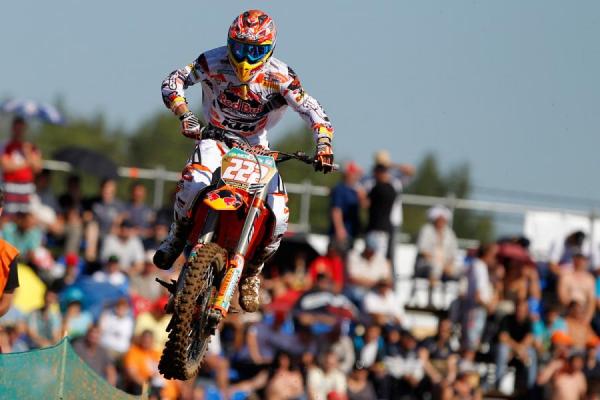 Cairoli sprinted free in the first moto with KTM teammate Ken de Dycker covering his rear wheel ahead of Rockstar Suzuki’s Clement Desalle and CP377 Monster Energy Pro Circuit Kawasaki’s Christophe Pourcel. The race was fairly processional and after a Herlings “show” in the opening MX2 sprint an otherwise impressive Grand Prix was just missing a killer slice of action.

Floride Monster Energy Pro Circuit Kawasaki’s Tommy Searle did his best to inject the necessary “juice” into proceedings that the crowd were baying for. The Brit had to retire from the wet qualification race on Saturday with a busted radiator after hitting fallen Yamaha rider Arnaud Tonus (the Swiss struggling with arm-pump and is set to have a screw removed from his scaphoid this week). It meant Herlings’ sole threat for the ’12 crown was low down in the gate and his subsequent poor starts gave the KTM man an easy ride to the chequered flag.

Searle had rallied back from the rear of the pack to 3rd in the first moto but a stumble on the second corner forced a flight from last position to a fantastic 2nd place in the second race that had the spectators whooping as if the former AMA racer had added an “ov” to his surname. Searle revealed afterwards he had been struggling with a dodgy gut but that didn’t seem to stop his momentum and some excellent lines that drew him effortlessly past teammate and Latvian GP winner Joel Roelants (4th) and Herlings’ KTM companion Jeremy Van Horebeek (3rd, again).

The entertainment increased for the second MX1 moto as Cairoli blew a three second lead and two positions on the second lap when he slipped off entering the waves. First Pourcel and then Desalle hit the front. The Suzuki man had Cairoli as a constant shadow as Pourcel drifted back; enduring one of those events where the Frenchman is quick but not quick enough and won’t cross that limit. A mistake by Desalle under pressure from Cairoli decided the race but the cat-and-mouse process ensured the 35 minutes and 2 laps passed quickly for all those watching. De Dycker made the top three for the second event on the spin and confessed afterwards that he believes he might have done enough to covet the factory KTM saddle next to Cairoli for 2013 as KTM slim from six to four riders and two in each class. Bobryshev – sixth in the first moto and fifth in the second, a victim of starts and less than full race fitness – coped with the adoration and attention; the level of which Cairoli or even a Stefan Everts in his prime would have struggled to handle. 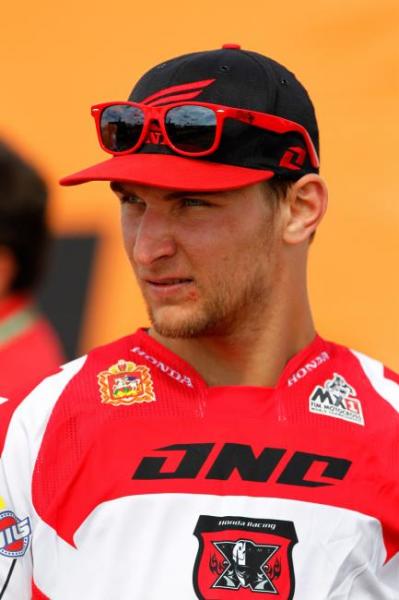 American interest was again held by Zach Osborne but a back muscle spasm meant the Virginian was struggling to breathe in the first moto. Massage and treatment in the break saw him attempt the second and he loosened up to the point where he could handle the ruts and bumps to manage eighth. The clock is ticking on 338’s European adventure and the odds are not against a farewell podium finish before the end of September.

The trip to Russia and the ‘overseas-GP-but-not’ had caused consternation in the build-up. Bad experiences of border and customs control in 2002 were still memorable (the teams were held up to the extent that the race was even doubtful to go ahead) and the distance was hefty. For every con found against Semigorje (far flung hotels, language barriers) there were more than enough pros. The organizers had clearly done their homework and for a maiden international event the facility ticked every box. The promotion had been widespread and even innovative for MX (a downtown light show launch against a high-rise).

The crowd was the biggest of the season with reports of queues stuck outside the circuit as the gates dropped and the track not only held up to a harsh battering of rain on Saturday but – according to the riders – provided a fun and challenging test. With plans to upgrade the complex (asphalt hard-standing in ’13, and more for the three years the contract runs) GP campaigners will have to get used to a far-flung but strong part of the calendar and perhaps budget effectively to ensure a better turnout that the 19 MX1 and 26 MX2 runners that took to the line.

Five rounds, ten motos and 250 points remain this year. Herlings enjoys a cushion of 51 after Searle’s bad luck and double DNF in Latvia seven days ago (he only managed to steal eight points more from the Brit in Russia) and Cairoli is back on the path of consistency and has 20 points more than Desalle only two events after he had lost the red plate to Belgian. Game on. 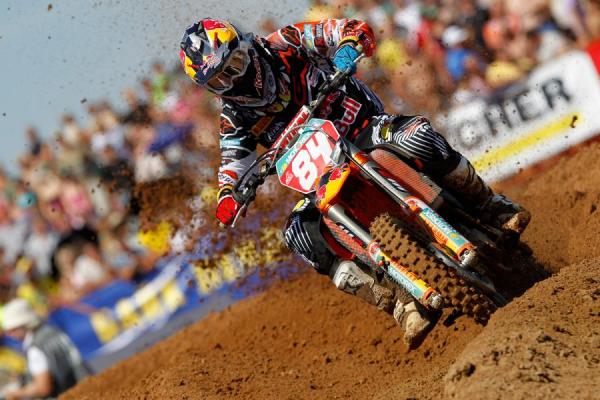 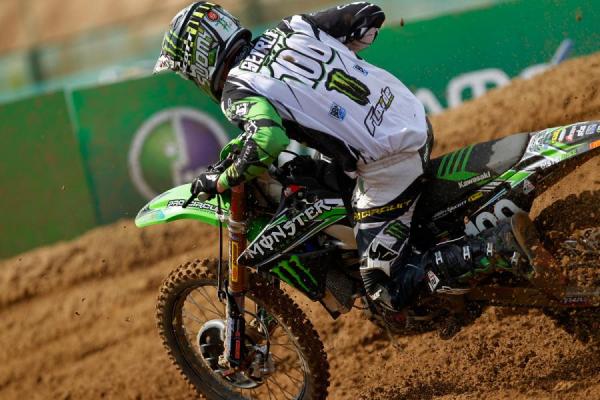 Tommy Searle would have to settle for second overall on the day.
Ray Archer photo 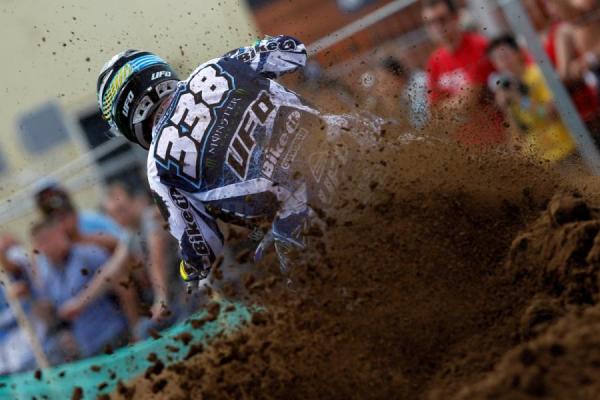 Back problems would relegate Zach Osborne to 12th overall on the day.
Ray Archer photo