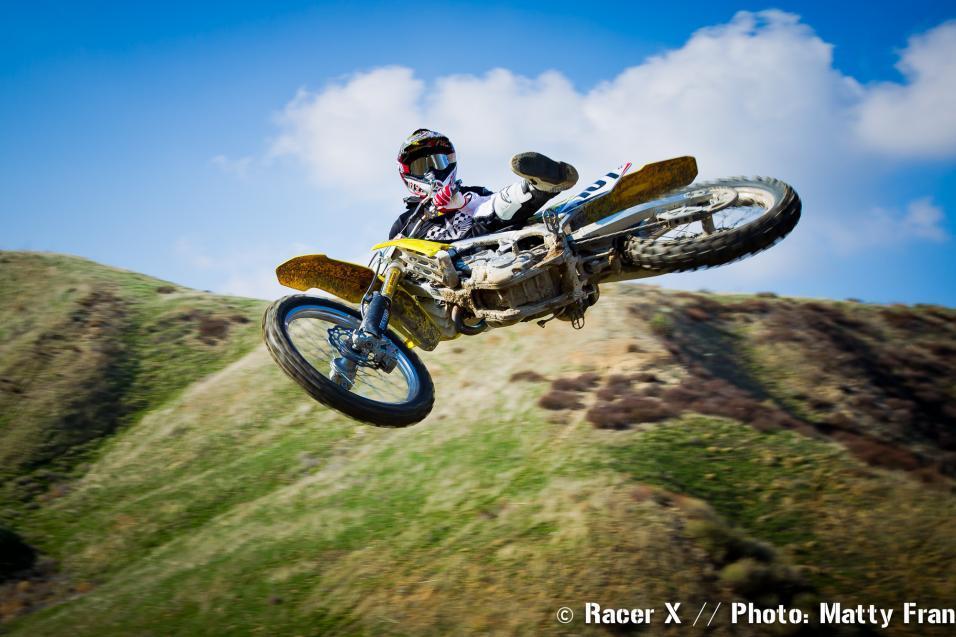 My buddies and I were shooting the breeze, reminiscing about the good old days and how rough the tracks were back in the day.  Now back in the day for me is eighties and early nineties when two strokes ruled the roost.  Do you think that the tracks rip up differently when two strokes rode them versus four strokes?  I have even noticed it at the local races.  Please bestow your knowledge spanning decades, oh master of the moto.

I keep telling the kids at Southwick they don’t know what rough is!

There are two right answers here, John. First, older generations always remember the past in a candy-coated haze that makes it seem better than it was. Most guys with a few gray hairs will tell you the fish they caught was always bigger than it was, their ex-girlfriend was hotter than she really was and they were much better riders than they really were. In reality, the fish you caught was a guppy, your lady was a complete cockroach and you couldn’t get out of your own way on a dirt bike. Now, I’m not saying you dated ugly women, John, but the memories you have of Southwick might be skewed with beers or the fog of many, many birthdays. So, there’s that.

On the other hand, I think there is something different about the way tracks form up compared to a decade ago when two-strokes were all we had. I don’t think that ruts and braking bumps form up nearly as big as they used to. I would guess it has something to do with the engine brake and the smoother power application of the four-stroke that keeps the ruts and bumps from building up but I’m just guessing.

I remember dropping into the Frog Pond at Southwick on a 125 and having to jump the bumps because they were so big. Now, maybe it really is smoother out there at MX338 these days. Or maybe I’ve just had too many birthdays?

During the post race interviews with riders, the riders have a way of totally avoiding or deflecting any questions from the interviewer regarding the race. Their replies are a laundry list of sponsor plugs, which is great, but drives me absolutely nuts. I'm thinking, they are already have or are wearing their sponsors on their gear....why don't they just have a small billboard in the frame with their sponsors on it? Then, they would have time to actually answer the questions. Ex. What did you think of the pass so and so put on you on the last lap? Answer. It was a good race and I just want to thank Thor, Parts Unlimited, Pro.........blah, blah, blah. Don't get me wrong, I am all about plugging the sponsors, but answer the damn questions! Nuts, like they are friggan robots! Ping, are u with me?

We’ve beat this subject up like I was Chris Brown and podium speeches were Rihanna. Like Ike and Tina. Marshall Mathers and Kim. I cut these guys slack when they first jump off their bikes and they get a camera shoved in their face. After all, they are full of adrenaline and not thinking clearly. But you are absolutely right about the way they fail to answer the questions. Just once I’d like a pit reporter to stop them, mid-monologue, and say, “Yeah, we know who your sponsors are… can you please just answer the question that I asked you?” That would be, as Ron Burgundy puts it, the balls. But it will probably never happen so lets just realize that most of these kids won’t master the art of the interview before their fifteen minutes are up. Just enjoy the racing and be familiar with where the mute button is on your remote control, I guess.

I love reading your response to these questions during lunch at work. The guys hear me bust out laughing for no apparent reason. Anyway please shed some light on why there is such a big gap between the top 5 and the rest of the field. I just find it hard to believe that there are only five guys in the world that are on the same level. Is it the bikes, is there some special training that only the top guys know about, or is it that only 5 guys want it that bad. Please keep me laughing and keep up the good work. And no, I don’t want it that bad. The last place guy out there would make me look like Pee-wee-Herman on a bicycle.

I don’t think it has anything to do with not wanting it. Maybe some of it could be attributed to not wanting to work for it, but all the guys who are in the mix want to be at or near the front. Equipment matters, but that isn’t the difference. Brett Metcalfe is on a great bike but he might never win a supercross race. Why? It isn’t because he doesn’t work hard, because he certainly does. I don’t really know the answer. I never made it to that level but I know that the power you have upstairs is unimaginable. I tell this story a lot about winning my first supercross race. It was near the end of the season and I had done somewhere around a million laps around the Kawasaki test track as a member of the Pro Circuit/ Kawasaki team. My lap times hovered around the same number all year long, within a second of my best time there depending on track conditions. After I won the San Jose supercross in 1995 I went to the test track to prepare for the season finale in Las Vegas and for no reason whatsoever I was almost two seconds faster per lap than I had ever been. The track was no different and I hadn’t made a breakthrough in my riding technique since the week before. The only difference was that I won a race over the weekend. Confidence is everything in sports and our little sport is no different. So, to answer your question, I think the top five guys all believe they should be winning. The rest of the guys are hoping to be on the podium at some point and that shift in mindset makes all the difference.