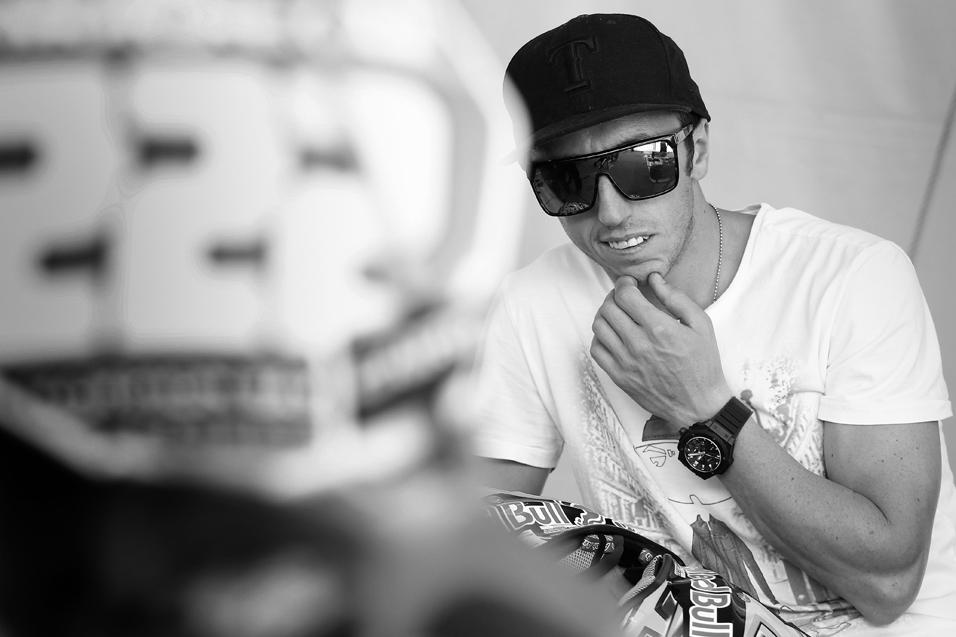 When you see the amount of time and effort that a club or group of volunteers put into a brand new venue it can feel a bit harsh to pick holes in the fabric of their work. For this fourth round of the FIM Motocross World Championship at Guadalajara there was no shortage of application and desire to make this race a success, but there was a degree of naivety.

First up, the things that ticked the ‘good box’. The circuit is the nearest a Grand Prix will be able to come to a Supercross event in terms of location (10 miles from the city centre), access (hundred yards from the main freeway) and logistics (adjacent to a Mall outlet with a bridge providing a route to ample parking). Good advertising and publicity was evident and this GP will be partially remembered for some riveting action in MX1 from the quartet of Tony Cairoli (winner for the second time this season), Clement Desalle (runner-up for the second time), Christophe Pourcel and David Philippaerts.

Swinging in the other direction the first ever Mexican Grand Prix was handicapped by a newly chiselled and complicated track. The fine sandy dirt was stubborn to watering efforts in the build up to the event – according to co-promoter Sebastien Tortelli – and the 5000ft altitude (higher than Thunder Valley), thirty-degree temperatures [high 80s in F] and stiff breeze didn’t help. The plumes of dust on Saturday had the majority of riders complaining of poor visibility and respiratory concerns. The teams were also battered by the mess in the makeshift paddock area. The level of dissatisfaction and worry over the possible dangers led to the extraordinary sight of almost all 19 regular MX2 riders (bar Max Anstie and Michael Leib) and all 20 MX1 contenders sitting out the qualification heats in protest. Leib and Anstie rode to 1st and 2nd positions, ahead of nine locally entered riders in what was the weirdest race of the season watched by the GP pack. Although American-Guatemalan Rodolfo Fernandez will always be able to claim that he once had a Grand Prix pole position. Post melee, Leib and Anstie were partially vilified by some of their peers in the post race hubris. 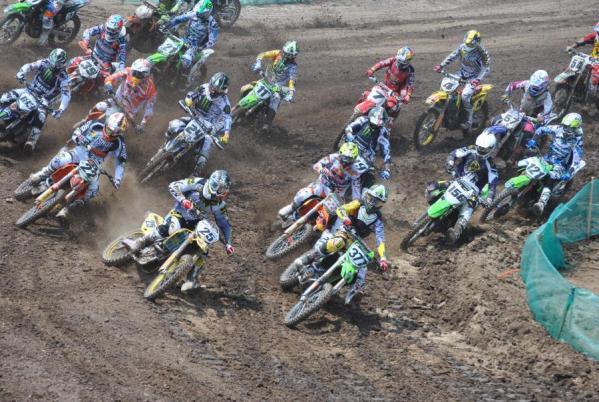 Pourcel would lead the MX1 class through the first turn in Mexico.
Gary Vazquez photo

Tortelli later that afternoon hinted towards the strike action carrying a lack of professionalism and promised the GP elite a mud race on Sunday. A better and wetter surface was duly provided with some excessive pooling in places but it eradicated the threat of dust (and any potential cancellation of a GP due to this reason for the first time since the 1990 Spanish 125cc round). The track was gnarly with some juicy kickers on the take-offs. While it was still tricky it seemed to split opinion rather than uniting a feeling of apathy.

With the programme running as normal another problem came to light. The inappropriate speed and ability of the Mexican and wild-card riders was a real hazard. Individuals were scoring points yet were somehow three laps down on the leaders. A Grand Prix should be a chance for any rider to shine but the debutants could barely manage a lap it seemed and the brushes with the faster element of both classes was almost scary to watch at times.

The results sheets show that KTM owned this one. Cairoli went 1-3 and Jeffrey Herlings headed two rather dull MX2 motos to go 1-1. Tommy Searle is riding the wheels of his Monster Energy Pro Circuit Kawasaki but he is simply not doing it at the front and to be able to challenge the Red Bull KTM man. When these two start together then we’ll get a good duel. In the meantime, MX2 is starting to let French teenagers Jordi Tixier and Dylan Ferrandis show some promising form and results. Keep an eye on these kids.

MX1 was worth the entry ticket. Pourcel, Desalle and Cairoli went at it in the first moto until the former SX Champion swallowed green fencing in his rear wheel that had been draped across the track in a separate incident. A stop to the pits ended his plight for a double win after his Italian success two weeks ago. Cairoli dealt with Rockstar Suzuki’s Desalle but the Belgian was more determined in the second moto and should have won the race if it wasn’t for the resurgence of Monster Energy Yamaha’s David Philippaerts. The Italian broke both of his wrists last summer and faced seven months away from the bike. The 2008 World Champion has been gaining speed since the start of the season but some questioned whether he would rediscover the speed and form of his better years. He answered the doubters in emphatic style with some creative lines and an aggression that saw him bang bars with Desalle on at least two occasions. In the meantime Cairoli pushed past Pourcel who had led the first half of the moto but would admit afterwards that he saw the risk-reward ratio too far skewed to push any harder. 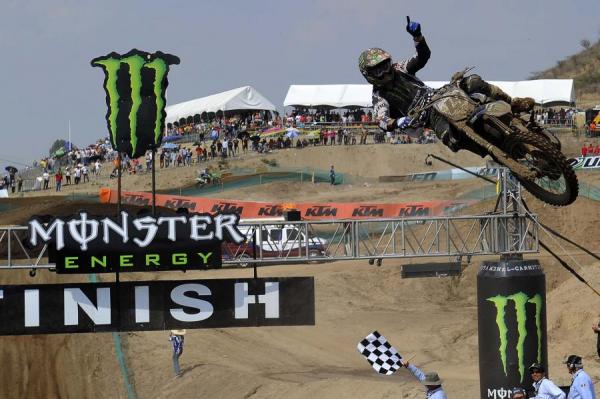 Philippaerts gained the headlines here. His was a heart-warming story of a guy who gives his whole life to the sport and able to return from a shocking injury that saw both of his lower arms rebuilt in a German hospital: “I’m so happy to win that second moto. I’m back! This is important for me because it was a long time since I last won. Mentally it can be difficult to deal with race crashes and results that you know can be better. I’m in great shape and it’s awesome to be back on the podium.”

Elsewhere Gautier Paulin was reduced to a spectator in the second moto after his factory Kawasaki wouldn’t start in the waiting zone. Steven Frossard re-injured his ligament-less right knee and question marks hang over his participation for the rest of the season. Ken De Dycker inches ever closer to a first podium with the KTM and Honda World motocross’ Evgeny Bobryshev was sidelined with bronchitis.

Michael Leib left with a right hand almost twice the size of his left. The peril of backmarkers struck the Californian early in the first moto when he couldn’t avoid a falling rider in front and smashed his hand into the tumbling silencer. Two dislocated fingers curtailed his Grand Prix after two previously impressive outings. Will Michael now be able to race in round five or make it to Hangtown?

A modest crowd visited Guadalajara and Tortelli stated to the press - in a far-from-impressed manner - that the industrial action of Saturday had actually been reported in a national newspaper as cancellation of the Grand Prix. Hardly conducive to putting numbers behind the fences but then not necessarily the fault of an unorganised group of riders concerned for their safety. Off the track there could be some repercussions from this weekend. Hopefully one of the after-effects will be a system of easier dialogue between the stars of the show and the ruling parties and perhaps some adjustments to the rules of qualification. Only a few days remain until another fresh venue will come on the scene with Beto Carrero entertaining the Grand Prix of Brazil. 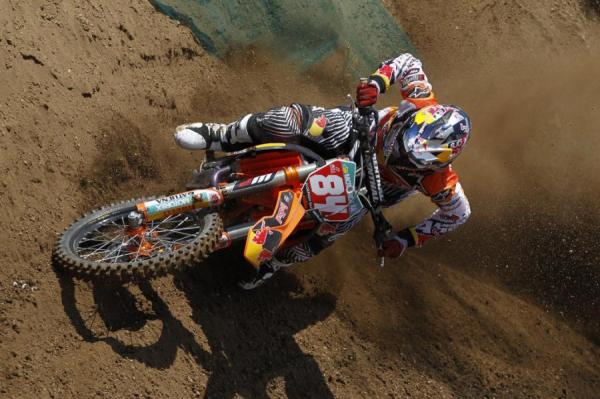 Herlings cruised to the overall in Mexico.
Ray Archer/KTMImages photo 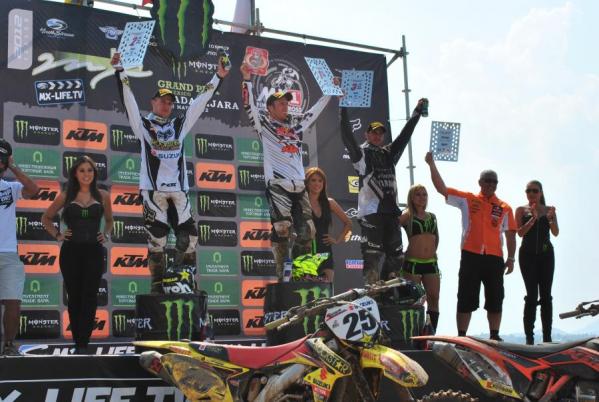