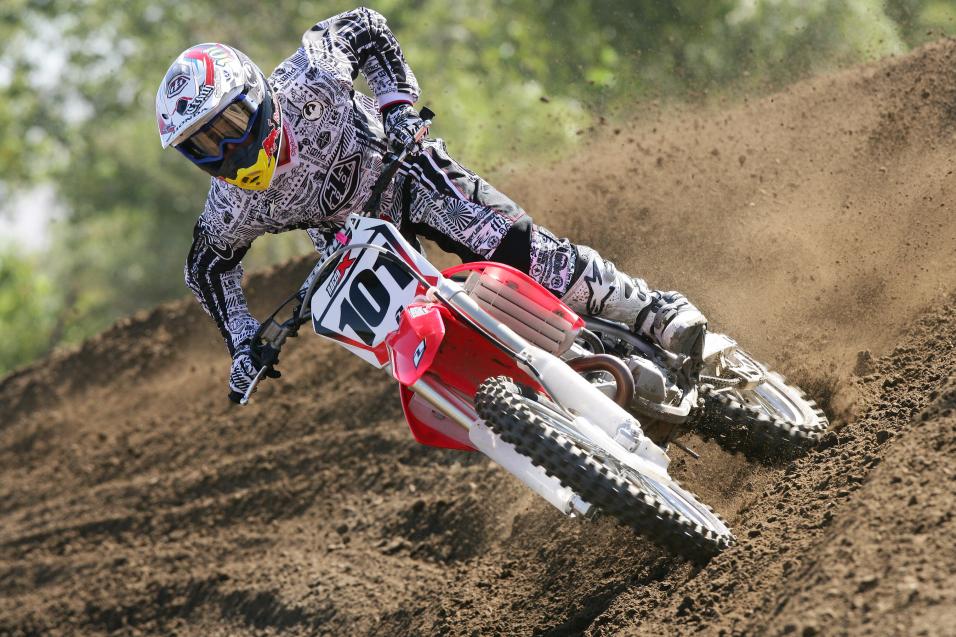 Love reading “Ask Ping” every week. Good for a laugh. They say the truest things are said in jest. There has been lots of talk about injuries in the 2012 SX series. I’m interested in both RV1 and CR22 knee injuries. Do either of those guys wear knee braces? If so, are they ineffective and if not, why not?

Sorry for being so serious… I’ll try and be funnier with the next question.

I’ve never been seated right next to Ryan or Chad staring at their legs as they sat in their underwear donning their knee protection. I’m proud of my unblemished record of staunch heterosexuality that way. Still, I am almost certain that both riders wear knee braces of some kind. Many people have been questioning the effectiveness of knee braces when riders are still suffering knee injuries while wearing them. Here’s the straight poop: Knee braces do work and they are a good piece of protective equipment but they do have limitations. Quality braces with properly installed extension stops will help to minimize injuries due to hyperextension and lateral [side-to-side] movement. However, there is nothing that ANY sports brace can do to prevent a torsional [twisting] injury. If you watch Chad Reed’s crash you can see that after impact is made with the ground his boot gets hung up on the bike and as it bounces and rolls to the right it twists his foot with it. At a certain point the pressure on the ACL becomes too great and it tears. See Chad’s crash HERE.

In RV’s case the crash wasn’t as violent but the outcome was the same. As Ryan’s bike fell over it pinned his foot to the ground. His body continued to move forward and rotate, straining the ligaments in the knee until something gave. RV’s crash.

The only way to prevent that torsional movement is to attach the knee brace to the boot, something that CTi did years ago for snow ski boots. There was an attachment that screwed the brace to your boot and made it one piece. That way, if your foot was twisted it rotated your entire leg at the hip instead of trying to twist at the knee. The downside of doing that is you increase your chance of hip injury. Obviously this type of system won’t work on a pliable motocross boot. However, an old trick that I was taught years ago by Danny LaPorte is to duct tape your boot to your pants. It sounds janky but if you have a knee injury it is a great way to stabilize your knee at rutted or muddy tracks. Just tape all the way around the top of your boot and then continue wrapping around upwards until you have encircled your pant leg just above your boot as well. This will, in effect, make your boot and your pant one unit and stabilize your knee from moderate torsional force.

Okay, I realize this has turned into a novel and it is a departure from the normal drivel you see here but I have some experience in the ACL reconstruction department. Now, back to your regularly scheduled nonsense.

You made a few enemies for dishing out the dirt first, like the extent of RV’s injury and Stewart going to Suzuki. Why are other MX journalist/insiders so reserved and hush hush?

Also can the Americans win at Lommel? The Euros are saying tracks too tough for them.

You have to understand what a small community our sport is. When you are traveling to the races every weekend you see the same guys week after week. You sit next to them on the plane, you see them at restaurants, you see them in the hotel and you have to walk into their pit areas for interviews or photos or whatever. So, if you are saying things that you know they don’t want leaked yet it makes for a very uncomfortable situation the following week and before long none of them will talk to you because they know that whatever they say is going online faster than video of Kate Upton wearing a bikini doing the Cat Daddy. That video just never gets old.

Since I’ve switched gears professionally and stopped attending so many races it has really liberated me to speak freely about the sport, the riders and the behind-the-scenes drama that goes on. I’m not there every weekend trying to get a free meal from one of the teams so I’m not so worried if I ruffle a few feathers.

Regarding Lommel I will say a couple of things: First, nobody is going to beat Jeffrey Herlings. He rides the sand as well as Kate Upton does the Cat Daddy. Sorry, it’s just a really mesmerizing video. Secondly, if you doubt our guys’ ability to do well in the sand you should think back to the very first time we kicked the world’s ass at the Trophy Des Nations in 1981. In the very same Belgian sand that the world’s best will wallow through this fall, the US squad of O’Mara, LaPorte, Sun and Hansen started a global shellacking that, with rare exceptions, continues to this day. Andre Vromans was the Jeffrey Herlings of that year, winning both motos, but it was the Yanks that brought home the big trophy. A sand race? We could send Goerke, Dowd and a Southwick local and be competitive. I’m not worried about results with the guys we’ll actually send.

I really enjoy the weekly Ask Ping update. Keep it up… it is a lot of fun. Sometimes the POSTS in the forum are even funnier. Great stuff.

My question is about fitness. We all hear about the importance of training and being in the best shape from all the top pros and we'll keep hearing it more now that we're getting closer to MX season. Here is my question: If you take the top 20 guys from Hangtown and have them do a pacer test, Leger-test or any other approved fitness test, how do you think the results would vary? And for the sake of your readers where do you think you would end up.

There would be a huge gap between those who really do the work during the week and those that don’t. I’d love to see results from a VO2 max test from the top twenty in each class to see the difference. Guys like Dungey, Tomac, Rattray, Brayton and Short would probably set the bar. I won’t name riders who I think would cruise along well below that bar but I think their results will do the talking next weekend. As a group I would put our hardest working riders up against top athletes from any other sport and be confident that motocross would be represented well.

Where would I end up? Well, it would be difficult to test me because for the past six months I’ve been on a loading dose of anabolic steroids, amphetamines and a Russian horse stimulant known to make thorobreds run at an incredibly high rate of speed right before their hearts explode in their chest. My guess is that I would fry the motherboard in any computer that attempted to track my test numbers and fitness level. I’m an animal right now, Yvan. And I don’t mean a cuddly little puppy or squirrel with his cheeks stuffed with nuts. I can literally outrun a car right now Yvan. And then I can bench press that car. If you want to get a ballpark idea of where I’m at just look at the best Leger-test numbers you’ve ever seen and multiply them by 85 thousand. Boom. No, seriously, I think my heart just exploded.