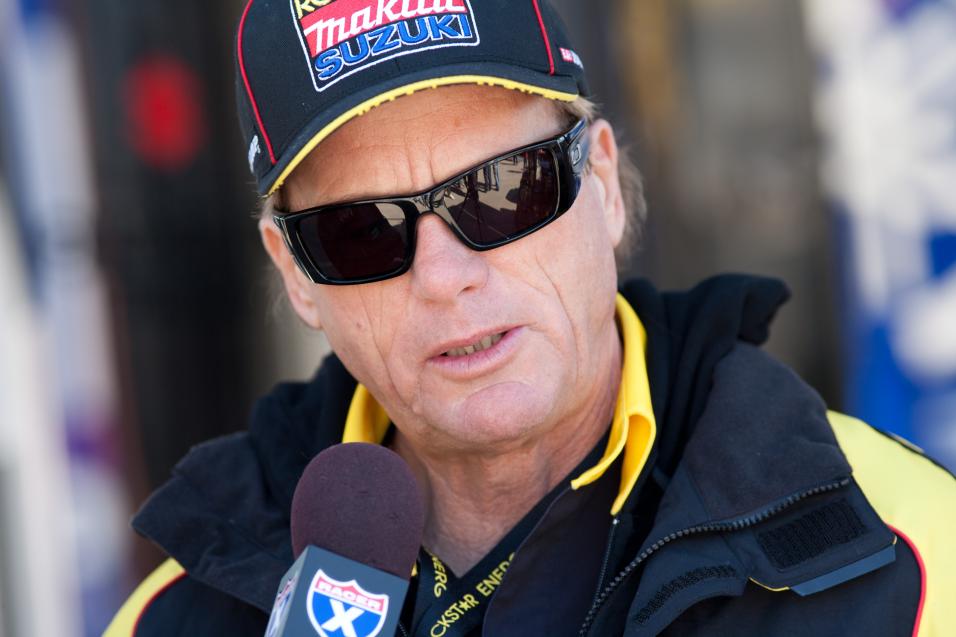 Advertisement | Advertise with Us
Hangtown Motocross Classic Rancho Cordova, CA Hangtown Motocross Classic Lucas Oil AMA Pro Motocross Championship
Yoshimura Suzuki Team Manager Mike Webb pulled off quite a coup by signing James Stewart at mid-season this year to a 2013 deal, and essentially getting his services for free this summer in the Lucas Oil Pro Motocross Championship. We talked to Webb about it this morning, just before another day of testing with James was set to begin.


Racer X: Okay Mike, how did you pull this off? Mid-season changes like this don’t happen very often. Does it even seem real right now?
Mike Webb: Well, actually James contacted me. But going back, we first worked together last year a little bit. He was a free agent at one point, so we got in contact, and I think we just hit it off really well. There was no baggage between us from either side, and going back to maybe the rider I worked with before, where there was a lot of baggage and there maybe wasn’t a good trust factor from the get go, none of that applied to this situation. We just started from ground zero with each other, and the honesty and communication were there from the beginning, and we became friends. We talked during the year, but more as a friendship. If he would do good, I would just let him know and tell him, “great job.” Stuff like that. Then when things started changing with the program he was with, he contacted me and asked me that if things changed, would I be interested. And I said, “Of course,” but we have to respect all parties, and it has to be legal and all of that. We have to respect the team he was with, and the manufacturer, and not step on any toes. But if he’s available, of course I would be interested.

But at the same time, if he does get out of his deal and then come to you, were you worried about whipping together enough resources to make it happen on your end?
On that side, we have resources. We have factory bikes, and I can adjust personnel to make this work as a two-rider team again. That really wasn’t a problem. It takes more work from all of us, but it wasn’t like, “How are we going to pull this off?” His deal starts in January, but he just wants to race. We had talked about maybe doing a couple of outdoors, but then we started talking, and we were like, “Let’s just go race. Let’s start racing. We will learn some things for next year.” Then next thing you know, we’re showing up at Hangtown. 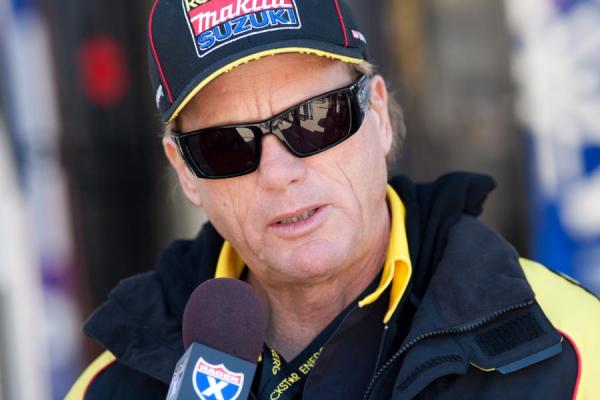 So the original focus was for 2013.
Right. The original focus was to get him a works bike so he could start riding it and get comfortable on it, and then, hey, maybe we do RedBud or something. It slowly evolved. We’ll learn every week, we’ll see where we are at. We are there at the races working anyway, and he wants to race, so it’s all upside. That’s how it evolved into that.

But the strange thing is, since this is really a 2013 deal, he is basically riding for free to race motocross in 2012.
Exactly. I told him straight up I can support you with everything you need at a factory level, but mid-season I can’t come up with budget money. Everybody knows how budgets are set. He would constantly say that wasn’t an issue, he would just say he wanted to race. That was constantly his thing, I want to race. Again, I can’t come up with some big salary or bonus program out of nothing, but that was never an issue with him.

Well, you can say this is really a start to 2013, but with James, if he gets third at a race, people immediately say, “What’s wrong?”
Yeah. But I can’t let that effect my judgement, or his. If we get a third, I’ll be pumped. We’ll take what we learned at that race and apply it to testing and use it at the next race. When the Ws come, I’m going to be pumped about that. But I’m not going into this expecting to go 24-0, or saying that’s our standard or that’s the only thing we’ll be happy with. This is a learning process.

People know that bike is capable since it won titles in 2010 with Ryan Dungey, and 2009 with Chad Reed, and even further back with Ricky Carmichael. But how much has the bike changed? It’s clearly not the same bike Reed rode three seasons ago.
No, there’s a different chassis from that year. But basically our suspension is constantly evolving. We have a great outdoor spec we developed with Brett [Metcalfe] and also with Dungey last year, and we’ll start from there, and then figure out the type of forces that James applies and make changes there. Factory components have been updated in small amounts, but electronics are evolving rapidly. Electronics are the forefront of racing today. The package is proven, it’s just a matter of adjusting it to work perfectly to a new rider.

You hoped to make a deal with James last year, but Suzuki was in a weird transitional state where you couldn’t get the answers you needed. Is this proof that you folks have turned that corner, and you can start planning ahead in ways you could not last year?
Absolutely, because we signed James to a long term contract, and we needed a commitment from Suzuki to do that. They committed to Yoshimura for the long term, and it’s basically a life time commitment. That’s basically their racing arm for the U.S. And, I know everyone has seen this industry pick up, I know Suzuki had a great last quarter last year, for example. The corner has definitely been turned as far as that in concerned. 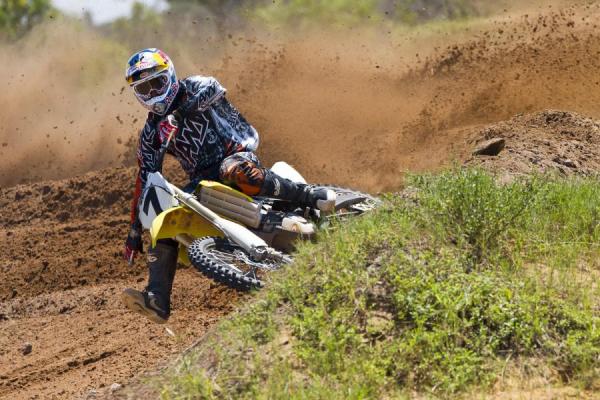 James Stewart and Suzuki have ten days until the opening round of the Lucas Oil Pro Motocross Championship at Hangtown.
Suzuki photo

So we can dispel all the rumors. This is still a factory Suzuki effort.
Yeah, American Suzuki’s factory program in both road racing and motocross run exclusively through Yoshimura. We still receive funding from American Suzuki, and we receive our factory technology and resources from SMC, which is Suzuki Motor Corporation in Japan. That has not changed one bit, that’s exactly the way it worked in the past. It’s simply a matter of Yoshimura now controlling those assets, in a partnership with Suzuki.

Did you ever actually get any testing done with James when you were working with him last summer? Or is this like a 10-day introduction and scramble to get ready?
We actually had three days working with James in Florida last year when he was a free agent. We learned a lot, basic setup and geometry for him, and the way he wanted the motor. We just started with him again, I think today is like the third day now? But he had also, when he was a free agent, bought an RM-Z, so he knew what he liked about the bike and what he wanted it to do.

So you’re not starting from zero.
No, we have a little bit of a base, but it’s still a challenge. We counted and we will have about 13 days, total, including working with him last year, and we have to get a lot done in that amount of time.

Finally, let me ask about Metty. Last few supercrosses were not good for him. Is he okay and ready? Obviously outdoors is where he usually shines.
Yeah, he’s good. The last few rounds, he hit the ground a few times, and that’s unfortunate because he stayed off the ground at most of the races. We have a good base from him last summer, and you’re right, he does shine outdoors and I think he’s more confident there. We’re looking forward to #7 and #24 being under the tent.