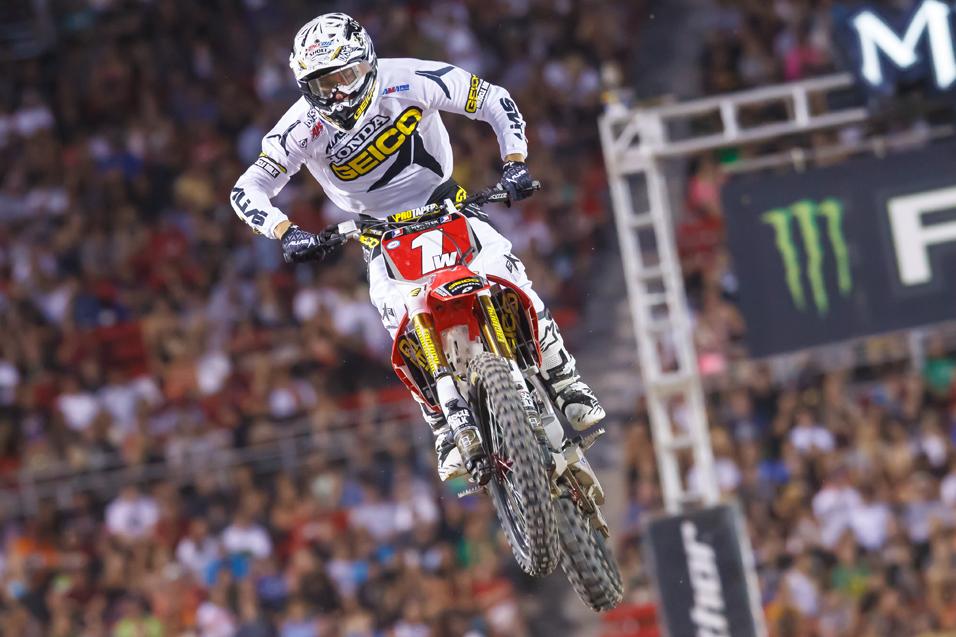 If there was any hope for Ryan Dungey to make up a 12-point deficit on Davi Millsaps for second in the championship he needed a win and some help. And early on it looked as if Dungey was going to catch the break he needed. Dungey set a blistering pace early, marching to a comanding lead while Millsaps was buried mid-pack. Then Millsaps caught fire, slicing his way through the field picking off one contender after another. With Dungey running away with the win all Millsaps needed was an eighth or better to cap off a career best season. But Millsaps refused to settle, instead charging to a second place finish—which was more than enough for Millsaps to hold serve and finish second in the championship chase. Dungey and Justin Brayton would finish in a deadlock for third, with Dungey taking the third spot due to his four wins.

For only the second time in history the Dave Coombs Sr. East/West Shootout had to share the limelight with the East and West Region season finales. And once again the show belonged to GEICO Honda stable mates Justin Barcia and Eli Tomac. Although they already had their foot squarely on the throats of the Lites class, there was no letting off for Barcia and Tomac as both claimed the top throne in their respective classes. The celebration didn’t stop there, as the GEICO Honda squad capped off a career year with Barcia and Tomac also taking the top two spots in the Dave Coombs Sr. East/West Shootout.

Let’s check out the lap charts to see how it all broke down.

Interesting stats of the night: Las Vegas proved to be one of the longest tracks of the series, with every rider surpassing the one-minute mark on their fastest and average lap time(s). Daytona was the only other track where every rider surpassed the one-minute mark. Justin Brayton not only set his fastest lap of the night on lap 12, but also managed to set the EXACT same time on lap 17—marking the only time all season this abnormality has occurred. 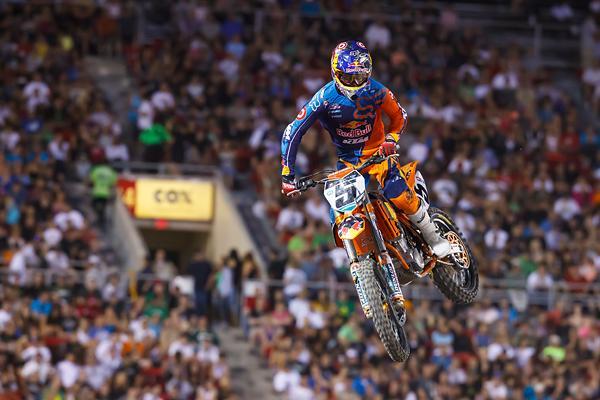 Ryan Dungey set the fastest lap of the Supercross class en route to his fourth win of the season.
Simon Cudby photo

Setting the fastest lap in the Lites class no longer seems to be enough for Justin Barcia. The two-time East Region Lites champion put down a soul crushing lap time of 1:02.640 topping Ryan Dungey’s 1:03.014 to set the fastest lap of the night. Red Bull KTMs Ken Roczen was right on the heels of Barcia setting a 1:02.668 in the East Region finale. Barcia and Roczen were the only two riders all night to dip below the 1:03 mark.

Hyped as a championship contender to begin the year J-Star JDR KTMs Malcolm Stewart has yet to full fill the high expectations that have been garnered upon the sophomore. Although he’s shown flashes of brilliance, the younger Stewart has been unable to put together consistent results. But right when you’re about to jump off the bandwagon Stewart put’s in a ride like he did in Vegas, capturing a career high fourth, which draws you right back in. Is this the breakout ride we’ve been waiting for? Only time shall tell. 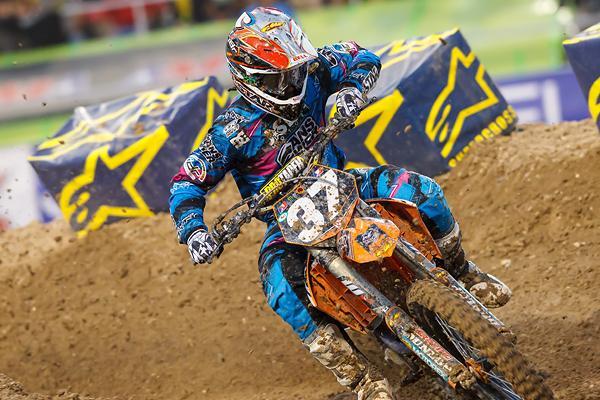 Eli Tomac would set the pace in the West Region finale, setting a 1:03.215 to take “fastest lap of the West Region” honors en route to the win. But overshadowed by teammates Justin Barcia and Eli Tomac, was Wil Hahn. Coined as a pre-season championship contender Hahn suffered another early season injury (hip) that quickly dashed any hopes he had of challenging Wilson and Tomac for West Region supremacy. Hahn briefly filled in for the injured Trey Canard in the Supercross class with varying amounts of success, but has been on a tear since his return to the West.

After carding a fifth in his return (a season high) at Seattle Hahn went one better in Salt Lake City finishing fourth. The season finale provided Hahn one last chance to prove he should be mentioned alongside the likes of Tomac, Wilson, Musquin and Seely out west. Finally able to breakthrough and secure his first podium of the season, Hahn in his brief return to the West Region has quickly put his name in the hat of 2013 title contenders. 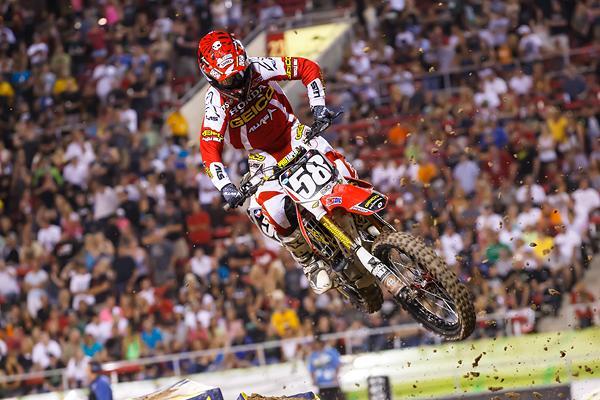 The Dave Coombs Sr. East/West Shootout provided some of the best racing of the night with Justin Barcia fighting off a hard challange from Martin Davalos and Eli Tomac to take home his second victory of the night.

But there was one small accomplishment that a GEICO Honda rider didn't grab in Vegas' Lites racing. Ken Roczen who would lay claim to one of the fastest laps of the night, this time with a 1:02.875, just tenths of a second off his East Region Lites race pace, to get the fastest lap of the Shootout. That's something! 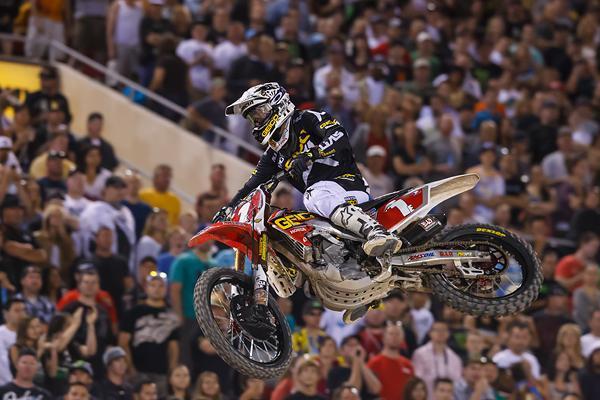