Advertisement | Advertise with Us
Sam Boyd Stadium Las Vegas, NV Las Vegas Monster Energy AMA Supercross Championship
It seems but a distant memory now, but when Ryan Dungey signed with Red Bull KTM for 2012, there was a real debate if he could manage to even get a single win on his new 450 SX-F. One win, total. This was not a guarantee, because even on familiar equipment in 2011, Dungey, as the defending Monster Energy SX Champion, delivered just a single victory. And KTM had won exactly zero races in nearly 40 years of trying.

One win. Could he get that?

Well, he got one at the second race of the year, got another in Atlanta to keep himself in title contention, and ended the year with two more. If the betting line on Dungey was set on over/under one win, four victories would pay out massively.

So with the risk for Dungey comes the reward. Now, just six months after many wondered if he could get a single victory in supercross, he enters the 2012 Lucas Oil Pro Motocross Championship as the championship favorite. Injuries have claimed fellow 2011 race winners Ryan Villopoto (the defending champ) and Chad Reed. James Stewart announced on Twitter that he is indeed racing outdoors, but nothing else is yet known about his plans. Dungey started 2012 saddled to the most unsure, unproven big-bike program in the AMA pits, but now he and that team represent the safest, most reliable bet. 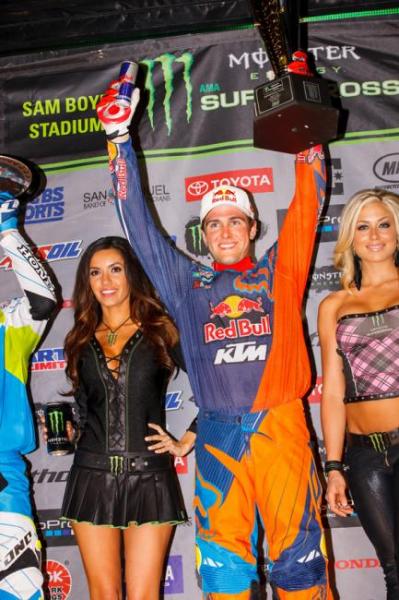 What’s interesting about Dungey’s season is that it started with a key way to take the pressure off: even if he had performed poorly, he could claim this first KTM season was only a learning year, with sights set on victory in 2013. But we all know there’s not nearly that much patience in racing. You either have it or you don’t, and had Dungey not won this year, the question would not have been if, not when, he would finally deliver.

Well, clearly this combination had it. We’re looking at the same Dungey now that we saw dominate things in 2010, and because he carries the same general demeanor as he did then, and because much of his support crew is the same (just wearing different colors). It looks all too familiar and all too normal. In fact, all that normalness is obscuring just how impressive his season has been. An injury might have taken away Dungey’s chance to win the championship. He may have only finished third in the final standings. But based on expectations coming into the season, based on the past history of a brand having never won an AMA Supercross race, Dungey and KTM can walk away from Supercross 2012 feeling like they won big.