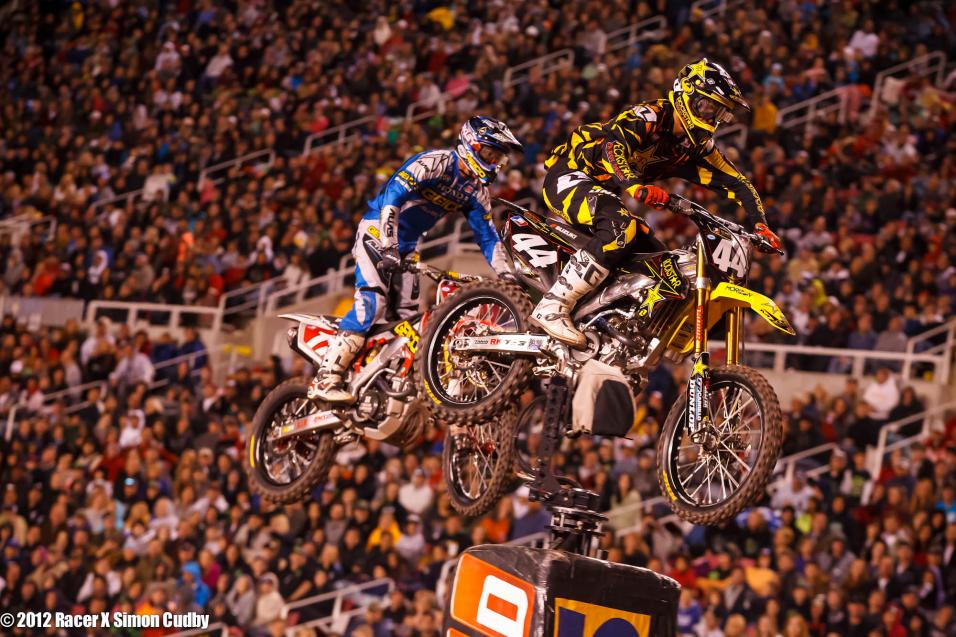 Advertisement | Advertise with Us
Rice-eccles Stadium Salt Lake City, UT Salt Lake City Monster Energy AMA Supercross Championship
Ironically, just week ago we were riffing on some of the strangest championship endings we've ever seem for The List, and one of them involved the 1984 125cc World Motocross Championship finale. There, two Italians were battling for the title until the one with the points lead, Corrado Maddii, was drilled by another rider practicing starts. His leg broken, Maddii could only watch as Michele Rinaldi took the all-but-forfeited championship.

Well, something similar happened on Saturday night, only it did not involve the title rivals, GEICO Honda's Eli Tomac and Monster Energy/Pro Circuit Kawasaki's Dean Wilson. Instead, it was last week's winner Ryan Sipes getting drilled by Jason Anderson on the hot lap, nearly bringing out the first-ever parade lap red flag! Yamaha Valli/Star Racing's Sipes, last week's winner, got the worst of it, and though he tried to go, he was unable to finish, and after pulling in the mechanic’s area a few laps into the race, was last seen being hauled over to the Asterisk Medic Unit on their chuck wagon. 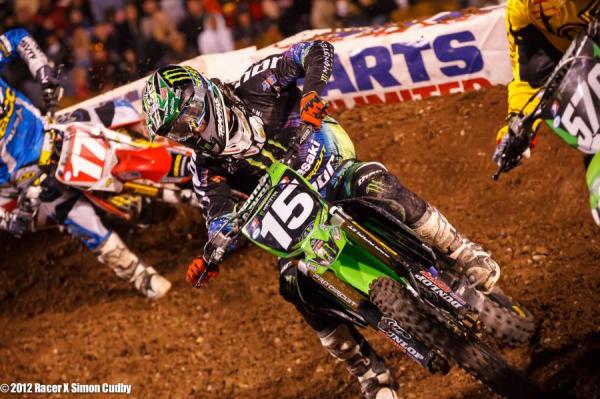 Wilson fought, but couldn't hold Tomac at bay, and in the blink of an eye, Tomac was champion.
Cudby photo

As for Anderson, the Rockstar Energy rider got an even better jump in the race than he did on that fateful parade lap and came close to winning the race, but the pragmatic and methodical Tomac had other ideas. After cleanly passing his rival Wilson, he set off after the lead and took the win. He was then shocked to learn that Wilson crashed out spectacularly in the whoops before the finish and pulled off, giving Tomac the mathematical title and avenging himself for last year's falter at the series finale. Fortunately, someone on the GEICO Honda team had the good sense to pack a #1 jersey just in case on an unlikely title, Tomac pulled it on shortly after race. Monster Energy/Pro Circuit Kawasaki is thus shut out of the title split for the first time since '08, when GEICO's Trey Canard and Yamaha of Troy's (remember them?) Jason Lawrence (remember him?) took each Lites SX title.

As for Anderson, he did the best he could, leading much of the way after that embarrassing crash off the parade lap start, and then earned a career-high second in front of Rockstar Energy Racing Suzuki teammate Martin Davalos. But he still had to be bummed about what happened to Ryan Sipes.

What's left is to see how injured Deano is after that get-off, how dinged up Sipes is, and how Tomac will do against his fellow champion and teammate from the East Region, Justin Barcia, in the final East-West Shootout in Las Vegas. One more great finale to go!