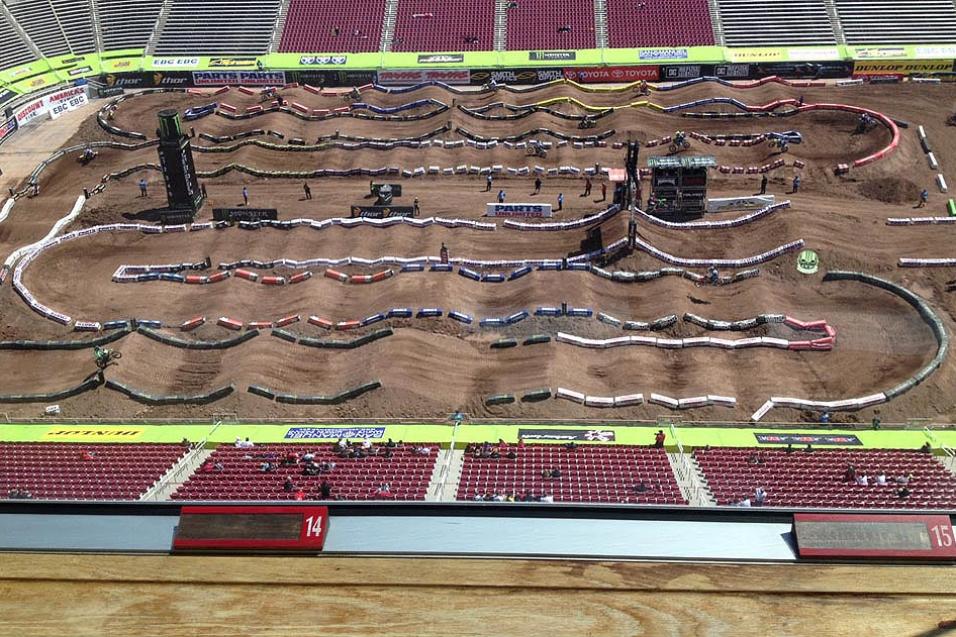 Last year, it was so cold for the Salt Lake City round of Monster Energy Supercross that it began to snow, and so much accumulated in the pits that the Lucas Oil Troy Lee Designs Honda team built a snowman next to their truck. Today it's cold, but not even close to that. And, the lack of snow (or rain) means we're running the full practice schedule here, which has been a rarity at this event.

The big news leftover from last weekend's Seattle race was the injuries to 2012 SX Class Champion Ryan Villopoto, and Lites West contender Dean Wilson. We all know Villopoto is out, and there are plenty of riders in the pits who know that door is open for a breakthrough ride. As Villopoto's Monster Energy Kawasaki teammate Jake Weimer said to us, "It's never going to get easier than it is now, but at the same time, I'm not telling myself "Oh you only have two more races to get it done.'" Yoshimura Suzuki's Brett Metcalfe also knows he can run at the front, but has been absent from the podium all season. He believes, with a start, he can get on the box today, or even pull out a win. "I think [last week's winner] Andrew Short and I are very similar, we've both been at this for a long time, and it just goes to show that anything can happen."

As for Wilson in the Lites class, the Monster Energy Pro Circuit Kawasaki ride now has a wounded shoulder after last weekend's battle (and crash) with Eli Tomac. Wilson went to therapy all week, often twice per day, but has not ridden yet. He says the MRI "didn't look good" so he's just going to try practice today and see what happens. He also says there are no grudges held between he and Tomac, they're racing for a championship so he expects aggressive racing.

Practice just began and Wilson is out there right now, looking pretty good.

Lites seeded riders are attempting a triple-triple-triple through a rhythm section, but it's tough. Cole Seely cased the first jump and went down hard, he's being attended to by Asterisk medical personel right now. Hope he's okay.

We'll have updates once we hit timed qualifying later this afternoon. Be sure to follow us @racerxonline on Twitter.