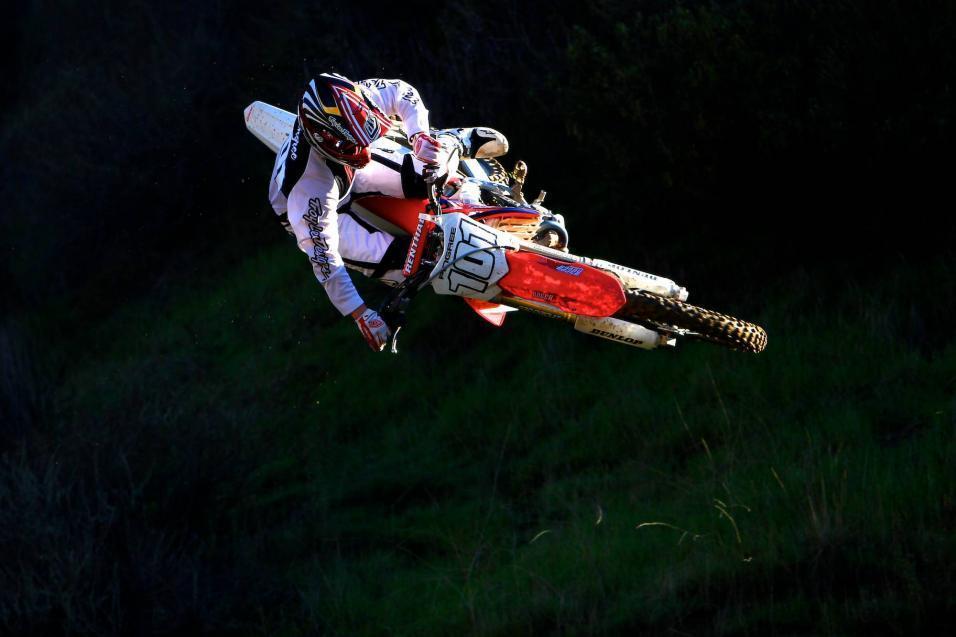 Watching the Houston SX tonight I couldn't believe how poorly Barcia handled himself. Obviously I can't imagine how bad it sucks to have a SX win snatched away like that, but you would've thought he was a little baby who had his bottle taken away. I know these guys have big money contracts but could you imagine acting like that much of a dick at work and not getting fired? We always hear how the pro circuit program helps groom these kids into respectable young men. Has FC Honda consciously taken the opposite approach by showing you can win even with disrespectful punks sporting porn staches? Or is it just an unfortunate coincidence that Larocco has two kids in his camp that, without the advent of motocross, would have likely attended their respective towns alternative centers prior to dropping out and likely make no otherwise useful contribution to society?

I read interviews from both riders this week and watched the footage a few times trying to get a sense of what happened on that last lap in Houston. Vincent was still racing for a top ten with Kyle Peters when Barcia came up behind him. Moments like this test a rider’s race craft and Barcia screwed this one up. He had a huge lead on Roczen and could have followed Vincent and Peters to the finish line with plenty of room to spare on Roczen. When he pushed his way past he crossed lines up on Vincent and took him out, tangling their bikes up in the process. The way Justin acted during the five minutes following that incident was embarrassing. He roosted Roczen after the finish and then blasted Dr. Bodnar and Eddie Casillas from the Asterisk crew during his expletive-filled rant where Vincent was being assessed. His behavior was inexcusable.

I understand why he was upset. There are a lot of hours, heart and soul that go into a season like he’s having. It can be difficult to control your emotions when you’re heart rate is maxed out and you have adrenaline and testosterone pumping through your veins like raw sewage through the Mexico City Public Water System. But part of being a professional is reigning yourself in when you want to run your bike full throttle into a wall and punch the first person you see. Justin seemed sincerely remorseful after the fact so hopefully he learned from this.

You make a joke about Justin being a baby but the bottom line is that these are just kids we are watching. Most of these 250 riders can’t walk into a bar and order a drink that doesn’t have a cherry in it. We need to remember that they are learning as they go with thousands of eyes and cameras on them the whole time. I like to piss and moan about things a lot but in the case of these younger guys lets just remember what jackasses we were when we were their age. How would you have done with a camera in your face 24/7?

After just watching another awesome Supercross from Houston and a little interview with Blake Baggett, I noticed quite a resemblance between BB and the Banjo Boy from Deliverance. I did a little research but no DNA testing.

Is it just me? Maybe I just hit my head one to many times comin up short on that triple? Please help shed some light on this. I don't mean any disrespect whatsoever to such a talented rider. If Blake's banjo skills are anywhere close to his riding skills he has something to fall back on after his racing days are done

I can’t imagine Blake would feel disrespected by you comparing his physical appearance to the inbred and mentally retarded banjo-playing boy from Deliverance. What’s to get upset about? Still, at first glance there are a couple similarities. If you squint it almost looks like Banjo Boy’s face is dirty from just finishing up a national moto. I’ll check Blake’s locker for banjo strings. In the meantime, the next time he finishes in the top three run over to the podium and see if you can get him to squeal like a pig.

I just picked up an old dirt bike for my grandson (his first one).  It's an old yellow one with the off road tires. As you can probably tell, I don't know a lot about dirt bikes and motorcross so I need advice. I have an old friend that gave us some of his old leathers and gear so my grandson will be safe when doing "pop-a-wheelies" and stuff. Nice guy with a lot of trophies from racing in the 70's and 80's.  But the one thing he didn't give us was a jockstrap and cup to protect, well, you know... the "family legacy.”  I remember back to my childhood days sometimes my feet would slip off the pedals of my banana bike, mostly on rainy days, and the only thing keeping my knees from scraping the ground was the nutcracker metal crossbar of the frame. It still hurts thinking about it.  Now, I know that dirt bikes don't have that kind of frame but I want to keep my grandson safe.  I say he should keep, well, you know… the family legacy safe, he said he just wants to ride "freestyle.” His father, my son, thinks were both nuts.  What do you recommend?  It's in your hands.

Thanks for coming here for a little motocross guidance, old-timer. In case you didn’t catch that it’s motocross with only one “R”. Step one to getting involved in this fantastic sport is getting a good bike and the yellow ones with off-road tires are terrific. Well done, grandpa. If I know you, and I think I do, I’ll bet you haggled him down to a fraction of his asking price. I love hearing the stories of the good old days back in nineteen o’ nine when you and Betty Lou rode your banana bikes around and then went and watched a “talkie” where you bought her a soda and tried to get to second base during the show. Great stuff. You’ll have to share more some other time. Anyway, let’s see if we can clear up some of your protective gear confusion. In motocross we seem to ignore protection for our wedding tackle. I don’t know why, to be honest, but the twig and berries aren’t even considered despite the fact that rocks and dirt are constantly being hurled in their general direction. Start with a helmet, chest protector, pants, jersey, gloves goggles and boots. If your social security check is coming in on time maybe even pop for a neck brace. Now, about this freestyle business…just so you know, that sport has very little to do with motocross. Yes, they ride motocross bikes but that’s about where the similarities end. Try to imagine the way hockey players think of ice dancers: Sure, they’re both on skates but the outfits and showmanship counts more than kicking ass and scoring goals. Do little Skippy a favor and steer him towards a track instead of a dirt ramp if you can. Welcome to the sport, J. Holmes. Hopefully I’ll run into your grandson and his new yellow bike at a track sometime.