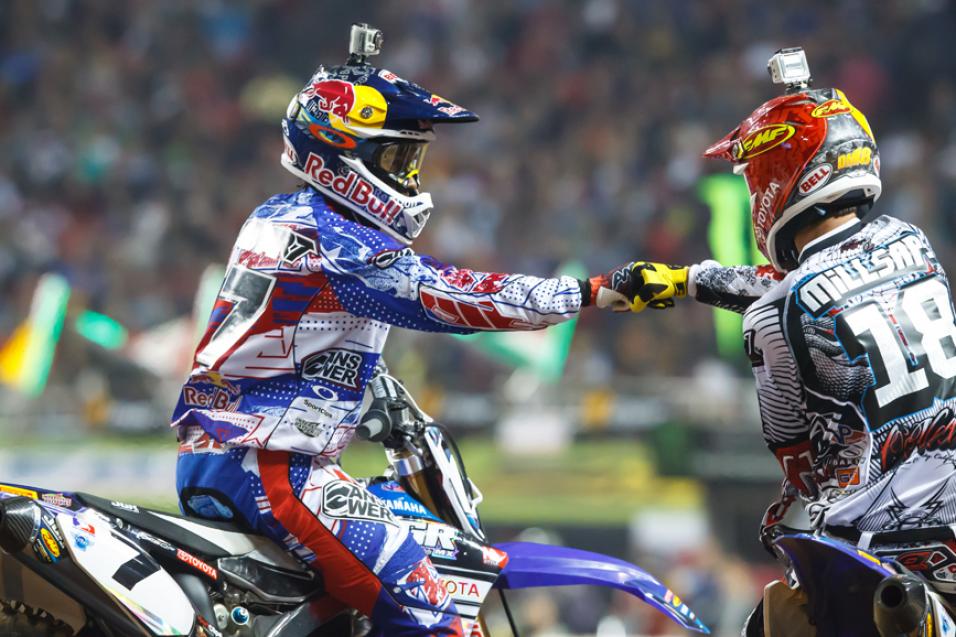 The Fast Lanes
The Houston track map features two whoop sections, both of which immediately follow jumps. This means that guys will be grabbing gears in the air and hitting the whoops at a higher rate of speed than if they were right out of a corner. This is good news for the guys that can handle big, fast whoops; not so much for everyone else. Expect these two sections to act as separators this weekend, as well as crash zones during the unseeded practices.

Escape Velocity
What started out as one of the most exciting seasons in history has become an absolute display of dominance, and to say that Ryan Villopoto has been riding well would be the understatement of the century. How well you ask? If Villopoto wins in Houston, and James Stewart finishes worse than third, RV will wrap the title up with an amazing four races left on the schedule. 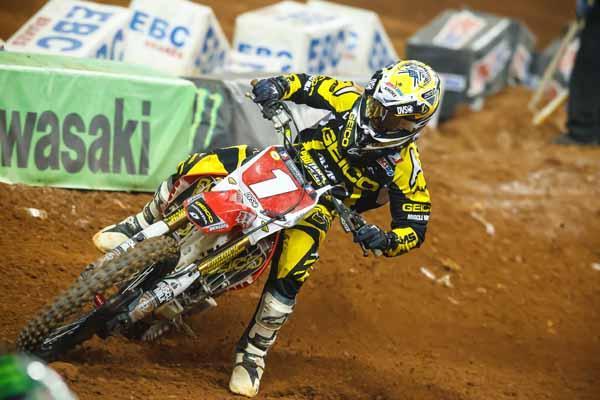 Can Barcia pick up his sixth win of the season in Houston?
Simon Cudby photo

Status Quo
When Justin Barcia finally lost a race in Indianapolis, it opened the door for speculation from the fans and media alike on whether or not he would return to his winning ways in Toronto. Well, he did, and he did it in convincing fashion by taking the lead early and finishing with a very comfortable margin over runner up Ken Roczen. Now that Barcia has returned to the top of the podium, the only question that remains is, can he run the table in the three remaining Eastern Regional Supercross Lites rounds?

Runner Up Run
With just three races to go in the Eastern Regional Supercross Lites series, Barcia holds a 28-point lead over Blake Wharton, and barring injury, the title is Barcia’s to lose. The battle for second, however, is still wide open. Just three points separate Wharton and Darryn Durham, while Roczen, who sits 12 points back of Durham, also has a shot at securing the runner up spot. We’ve already seen some great battles between these three, and as the series comes down to the wire, expect things to heat up even more.

Finding the Groove
With two second place finishes in a row, Justin Brayton has been seeing more box than Federal Express lately and is putting together a great second half to a season that didn’t get off to the best of starts. In Toronto, he was the fastest qualifier, briefly led the main event, and finished nearly five seconds ahead of Kevin Windham. With performances like that, you can expect Brayton to be battling for yet another spot on the box tomorrow night in Houston. 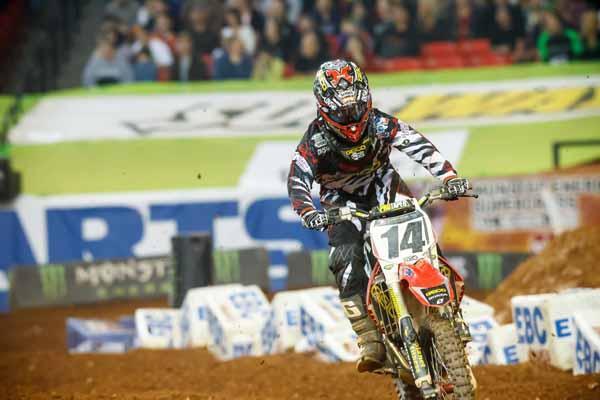 Windham looks to pick up his third podium of the year in Houston.
Simon Cudby photo

Hometown Hero
Kevin Windham often proves to be a strong second-half player, and with his recent podium performances in Daytona and Toronto, he seems to be hitting his stride. With the series heading to Houston and New Orleans, two venues that can be considered hometown races for Windham, expect to see more strong rides from the veteran.

Redemption
Blake Baggett isn’t exactly having a stellar year so far. Granted, he’s earned two second places and a fourth place finish, but he’s also taken a ninth and two fifteenths. That’s a far cry from the results that are expected out of someone who was considered to be a title contender at the beginning of the year. With only three Eastern Regional Supercross Lites races remaining, Baggett needs to challenge for some wins, and he needs to start in Houston.

Hill Returns
After suffering a heartbreaking injury at A1, Dodge Motorsports/Hart and Huntington’s Josh Hill is set to make his return to the racetrack this Saturday night in Houston. At the beginning of the season, the team said that the aim for Hill was simply to make mains and build from there, and with Hill missing the majority of the 2012 season, it’s likely that that goal hasn’t changed. Expect Hill to focus more on getting his feet wet again this weekend than battling for a  top position. 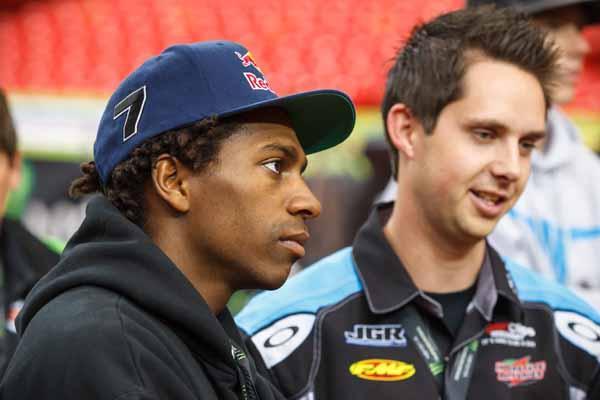 Bogle Bungle
There’s no doubt that GEICO Powersports Honda’s Justin Bogle has the speed to battle for podiums (he took third in Atlanta), and possibly even race wins. Unfortunately, he’s been having problems with consistency and whether it’s due to bad luck or run-ins with other riders, he’s been finding himself on the ground frequently this season. Will Bogle taste dirt or champagne tomorrow night?

He's Back
After sitting out Toronto with injuries sustained in Indianapolis, James Stewart will be back in action tomorrow night in Houston. While Stewart is a threat to win races every time he lines up, he'll also be racing with a tweaked knee and a broken hand. Can Stewart challenge Ryan Villopoto for a win, or will his injuries relegate him to an unremarkable performance?