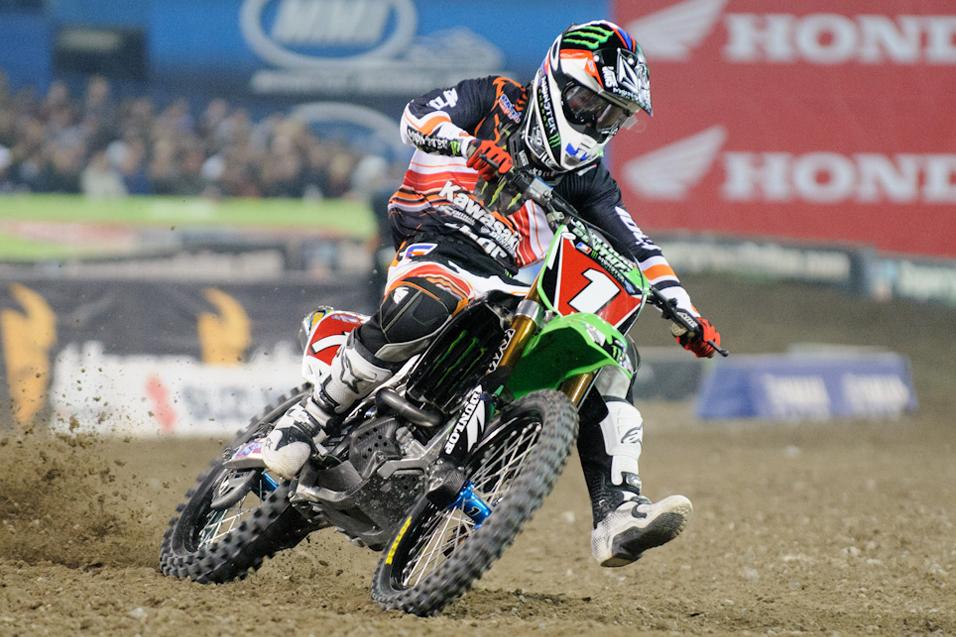 Welcome to the Ryan Villopoto show. Starring Ryan Villopoto, with a special guest appearance from Justin Brayton. With the other four heavy hitters sidelined with injuries, Toronto quickly turned into a one-man show; starring … you guessed it … Ryan Villopoto. A quick start by Honda Muscle Milk’s Justin Brayton was quickly rendered moot, as RV made an early charge for the lead and cruised home from that point forward. The defending champion now holds a commanding 79-point lead over the idle Ryan Dungey, and could wrap up his second career SX class title as early as this weekend.

Blake Wharton proved in Indianapolis that Justin Barcia is beatable, but Toronto proved it’s tough to repeat. When Red Bull KTM’s Ken Roczen grabbed the early lead, with Barcia in tow, it looked as if we were finally going to witness the Barcia/Roczen showdown we have been clamoring for since the teen-sensation, Roczen, made Monster Energy Supercross his full-time playground. But one love tap later, Barcia was checking out and Roczen was sent packing for second.

Let’s take a look at the lap charts to see how it all broke down.


Villopoto once again topped the lap charts in Toronto – stop me if you’ve heard that before – throwing down a 47.172 on lap 5. With only two other riders, Brayton and Jake Weimer, dipping into the 47-second range, Villopoto was setting a commanding pace up front. Although he has an iron grip on the championship chase, RV has yet to take his foot off the pedal, continuing to set a scorching pace, leaving the rest to play catch up.

Monster Energy Pro Circuit Kawasaki’s Broc Tickle has not had the easiest transition into the Supercross class – struggling to find the confidence that earned him the 2011 West Region Lites title. The North Carolina/Michigan/California native turned a corner with an eighth at Daytona and has yet to surrender that spot – garnering his third-successive eight place finish at Toronto. Tickle has yet to reach the pinnacle of a top five, but is slowing inching his way closer to a breakout ride. 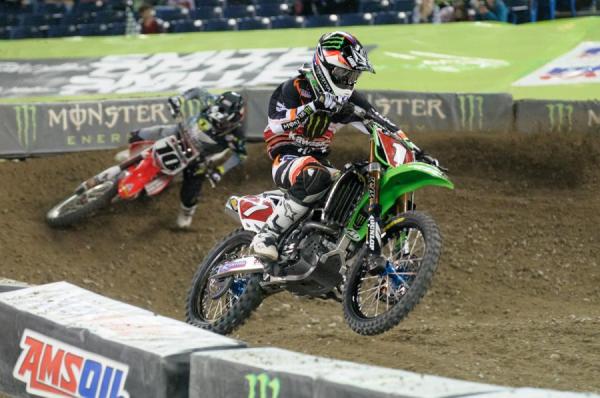 Villopoto walked away with the win and the fastest lap of the night.
James Lissimore photo

Justin Barcia continues to have the Midas touch in 2012, turning anything and everything into gold. Barcia wrapped up his fifth win in six races at Toronto, setting a blistering pace in the process – almost a full second faster than Blake Wharton’s 48.712. Unstoppable? He is not. Damn near unstoppable? That he is. Enjoy the show!

Eleven10 Mods continues to be the David to the Goliath that is the East Region Lites class. The duo of Alex Martin and Jeff Gibson had season best finishes in Toronto, with Martin overcoming a late run in with two-time Arenacross champion Tyler Bowers. With the team now firmly established inside the top ten in points, Martin currently sits in ninth, top ten finishes no longer come as a surprise. They have become the norm. As for Bowers, he ended up 14th after his lock up with Martin, but he logged the fifth-fastest lap of the night in Lites. Bowers is a definite candidate for a top-five finish before this Lites east tour concludes. 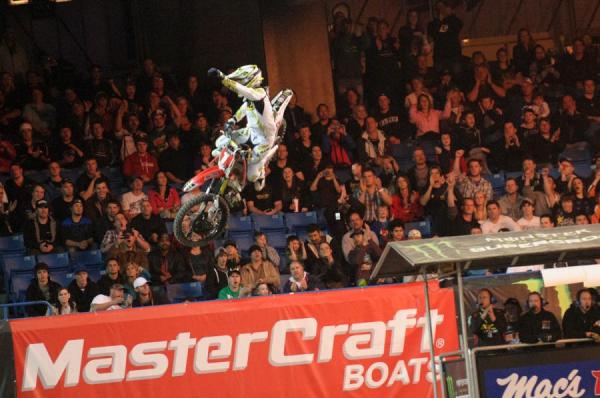 It's all but over as Barcia took home his fifth win of the season in Toronto.
James Lissimore photo