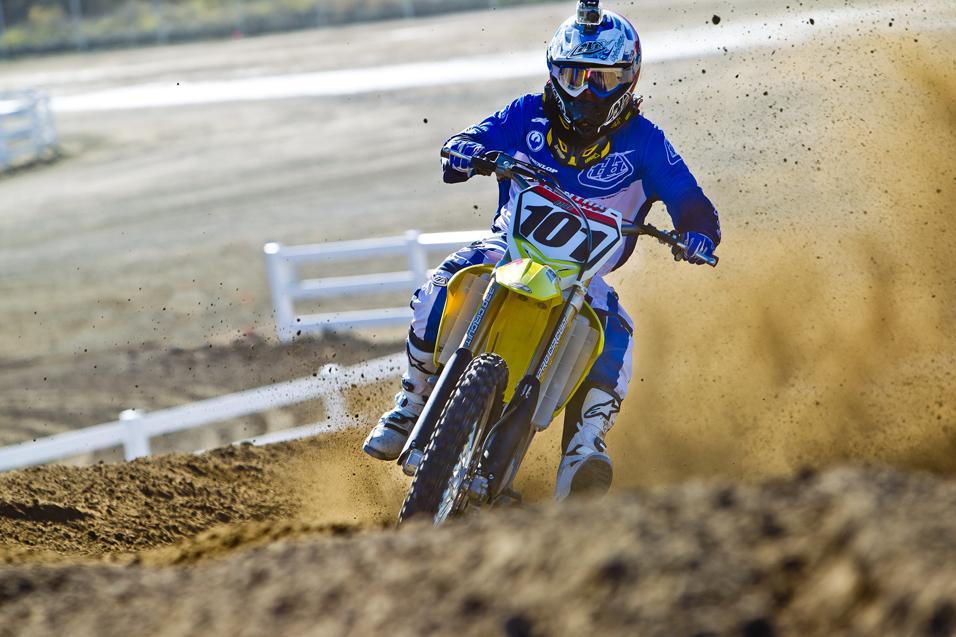 Would you please exercise your enormous influence in the SX/MX community and talk to Ricky, Fro, and Ralph before they go on TV again with those ridiculous suit coats they wear during most broadcasts? Don’t these guys make enough money to get a tailored jacket?  Ok…Fro’s jacket wasn’t so bad, but Carmichael and Sheheen?

And while you’re at it, talk to the rest of the racers when they attend the year-end awards ceremonies. Baseball caps and sneakers while accepting your SX championship trophy?   Let’s clean it up guys!  If Chuck Liddell can rock a tailored suit so can our pro moto racers. Get on it Ping!

We piss and moan that our sport isn’t taken seriously by ESPN and other major broadcasting networks but maybe this is a peek into why. When the very best athletes in our sport, guys with multi-million dollar contracts, show up to formal functions wearing skateboard shoes and a flat-bill hat with their ears tucked in it says one of two things: Either we are too “core” to care about what the mainstream thinks or we are just a bunch of kids without any real context or perspective when it comes to social functions or public relations as it relates to the promotion of the sport. Maybe the answer lies somewhere in the middle. Or maybe they show up to those things looking like bad prom outfits because they realize the only people who are watching are the same folks who show up every weekend. I’ll pass the note along and see if anyone shows up in a tailored suit this year.

Go ahead, tell him that suit looks like crap. Do it.

This week it was made official that BT is going to ride Reed’s bike this summer. I know you are boys with Townley and all but how do you really think this is going to turn out? Let me help you out with this one… it will end in the ER. He seems like a great guy and all that but very few riders in the history of this sport have had as much trouble as he has staying healthy. I don’t think Chad’s bike will see the podium all summer. Does Reedy have a plan B if his fill-in rider gets hurt?

Ben has had a lot of injuries. I can’t argue that. But to anyone who doesn’t think he’ll be a podium threat every single weekend I have to ask: Are you dumb or stupid? Look through his 2010 results, which he posted on a bike that was in development all season long and never really got to where we wanted it. He was second in points going into Washougal! Reed’s bike is on a completely different level in terms of performance and that will translate to confidence for Ben. He has Chad, Goose, Lars, Dave and a dedicated staff to back him up all summer and that is something he hasn’t had since 2007. Ben is for real. Reed wouldn’t have hired him if he weren’t. And you, sir, are a jackass. I hope I see you at Hangtown so I can’t point and laugh.

Ping,
As I'm sure you have noticed, the tone and content of the comments below the Racer X stories has really changed in the last year. A few weeks ago you called people out for pasting their fact-challenged manifestos from one story to another. They must not have read it, or figured out they were being made fun of, because nothing changed.

This was really bothering me. Could my perceived peers (current and former racers who were never that fast) really be that ignorant and petty?

I gathered a team of forensic social media analysts and they scoured the site looking at context, grammar, posting times and other factors. Their conclusion was that five percent of the posters write 95 percent of the posts and that it is likely that the five percent are mostly middle and high school aged American girls, specifically the group commonly referred to as "mean girls." With the poor spelling and lack of grammar it was likely they were using (the ironically named) smart phones to make their entries.

I just thought I'd share this with you. It's not my fellow vet riders acting like ignorant children but a small group of mean girls that have hijacked the site.  I don't believe Ask Ping is something they read because the humor is over their head, so it is safe to put the results
here.

Thanks for doing the legwork on that one, bro. Though, if we’re giving statistics, I’m about 98.5 percent sure you are making all that crap up. You’re probably right on the mark though. That Pizza Corner douchbag that always has a wise-ass comment is probably a high school senior mathlete whose face is so acne-ridden it looks like a pizza. Look, if you don’t like this column, and all of your posts confirm that, then stop taking the time to not only read it but also to then scroll down, read the comments and add your own. It’s idiotic. I wish the comments could be civil and a good place for mx fans to banter. I lie awake in bed at night wishing that, I really do [no, I don’t]. I also wish PED’s weren’t an issue in any pro sports. I wish Brittney Spears didn’t have to lip sync all of her concerts and I wish with all my heart that Pizza Face would get an atomic wedgie at school this week or get pummeled by the someone on the football team. Alas, HGH works, Britt can’t sing and Pizza Face, well… actually, that one could happen. Let’s hope.