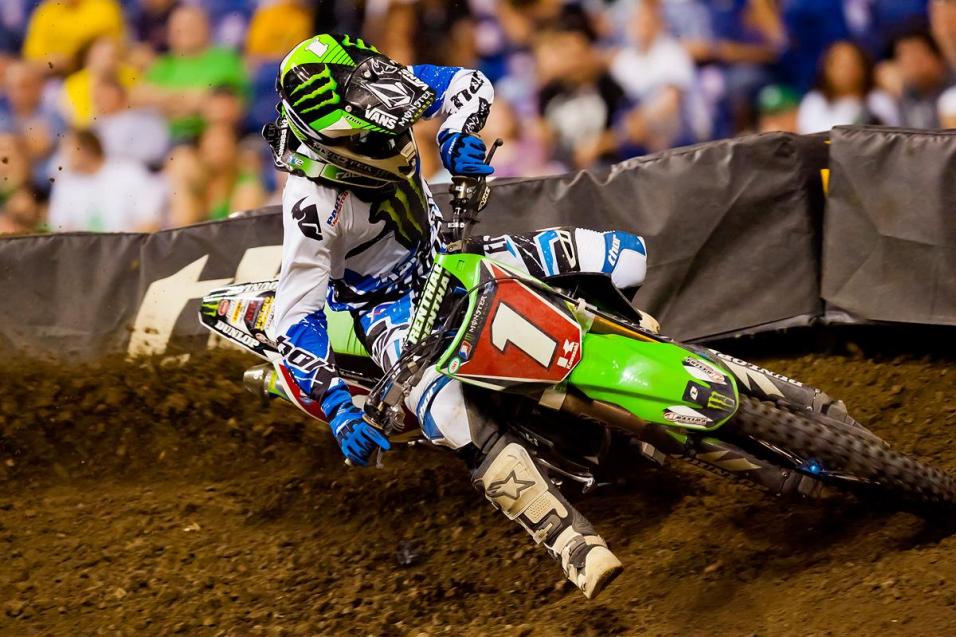 Ryan Villopoto is really fast on all parts of the track but I think he's exceptionally fast through the corners. All the top pros are fast coming into the corner and exiting the corner but the most important and most difficult part of a corner is, what I call, the "Transition". If you remember from my last The Breakdown article the transition is where you go from braking to accelerating. Ryan is amazing here. His corners are one fluid motion. He has mastered many techniques in order to pull this off so consistently and fluidly. One weapon in Ryan's arsenal is his excellent steering skills. There are basically two different ways to take a corner. If there's really good tacky traction and/or a berm you would be steering into the corner with the front wheel, like Ryan is doing in these two examples. If there is no berm and not so much traction you'd be doing more steering with the rear wheel while the front would be counter steering. You'll see that in Justin Brayton's example further down. Let's look at two Villopoto photos first. 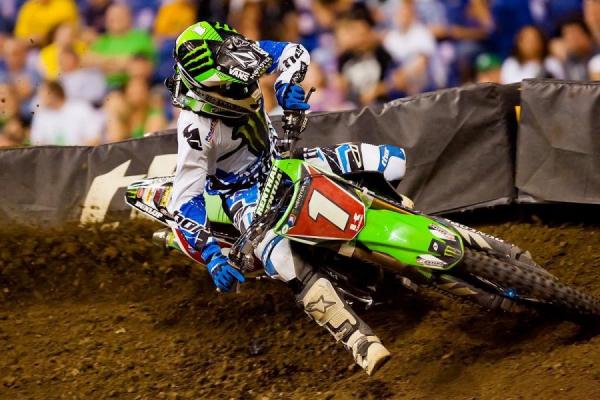 Okay, in this photo of Ryan with good traction, a cushion berm and even a little bit of a bank you definitely want to be steering with the front wheel. Notice how Ryan keeps his outside (left) elbow up. This allows him to have good leverage with his upper body in order to control the lean of the bike. Here it looks like he needs the bike to lean over a little more because he's pushing it over. Be careful on this not to let your shoulders rotate toward the outside of the corner as Ryan is starting to do a little. You want to keep your shoulders squared up with the direction you want to go. This not only gives you better leverage factors but also maintains your center of balance. A common mistake is to drop the outside elbow which causes you to rotate your shoulders toward the outside of the corner, loosing your center of balance.

RV maintains one figure on the clutch and one of the front brake. Ryan is just finishing the Transition. Of course he has already let go of the rear brake earlier. This is a must when you're going to lean the bike over far in a right corner. Otherwise your foot is going to get in the way. This is why Ryan is just now letting go of the front brake. If he still needed to slow a little in order to keep the bike down in the corner he could do so. He keeps a finger on the clutch to deliver the precise power at the precise time or instantly cut the power if needed. Here's one more photo of Ryan using the same techniques. 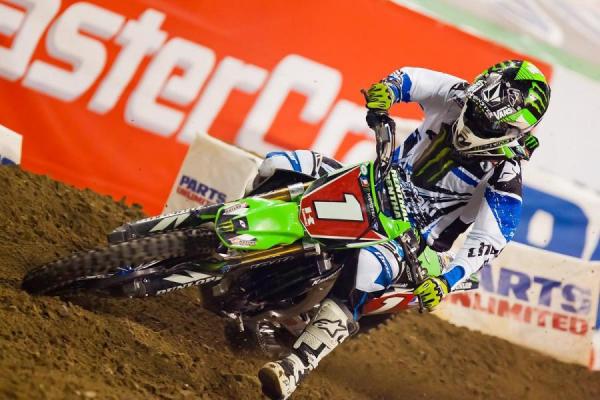 Both knees are gripping the bike and his inside foot is in the exact position needed to catch the bike in case it falls to the inside too far, especially if the front end would slide out. He's starting to accelerate so his upper body is forward, head over and in front of the handlebars, all textbook, something you'd expect from the fastest rider on the planet. 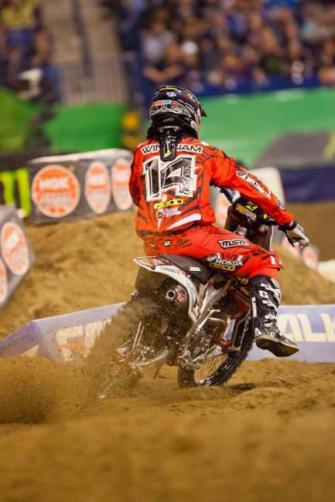 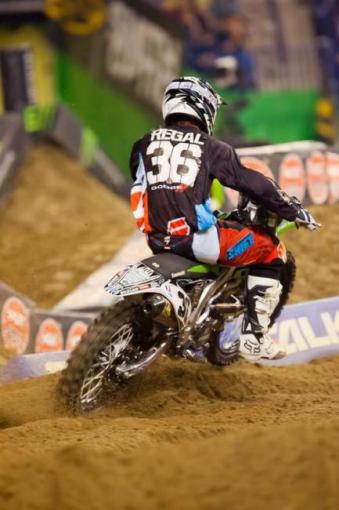 Anyone who knows much about motocross knows that Kevin Windham has one of the smoothest and best techniques of any rider on the planet. Kevin's riding style is poetry in motion, making something so difficult look easy. But this photo caught Kevin in the sand section making a little mistake. The sand caused Kyle Regal to make the same mistake. Kyle better get it turning more to the right soon, his front wheel is already over the berm. The cause of the mistake is misjudging how far to lean the bike over. In these cases, they didn’t lean it over far enough. I pointed the same type mistake of Ryan Dungey on my last Breakdown article.  The trailer of this mistake is what you're seeing in the two photos, upper body leaned way to the outside and the inside leg acting as a counter balance trying to maintain the center of balance, which has now gotten out-of-sinc, all in an effort to turn more to the right. 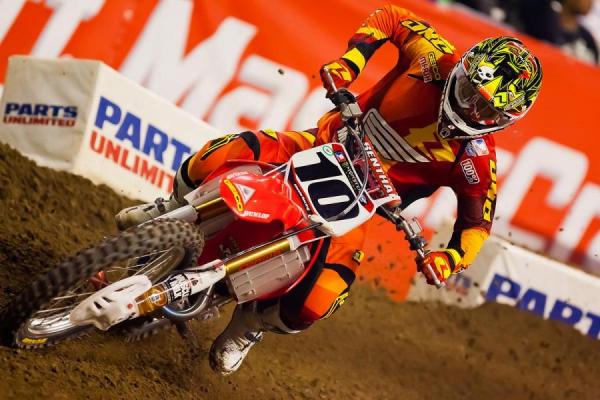 Justin Brayton is reaching hard for the top of the podium. His efforts and skills are nothing short of amazing. The photo of Justin here displays some of his excellent riding techniques. Notice his elbows are up and out while his shoulders remain squared up with the corner. His head is up over the front of the handlebars. There's not much of a berm here so JB is drift sliding a little through the corner. This means he is steering with the rear as the front wheel is counter steering a little. I think Justin should still have his finger on the front brake. I also think he has his front brake adjusted too high. This makes it more difficult to over grip for the exit of the corner while continuing to keep a finger on the front brake. I believe JB is at the transition part of the corner. His forward body position will allow that drift slide to continue. JB is due for a win. Will it happen in Toronto? 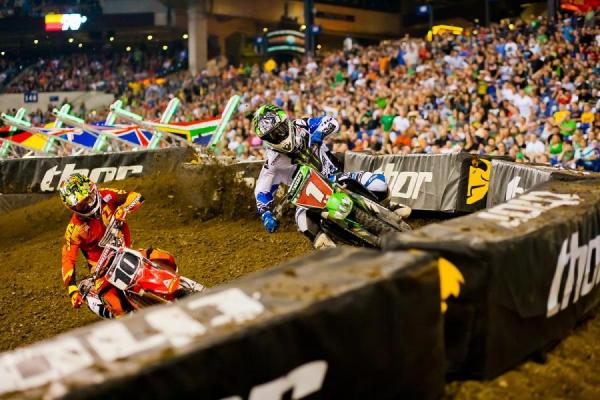 In this photo of Justin and Ryan you can see the techniques again that I described. Ryan has already pulled the trigger, gone through the transition and is accelerating hard. He had to get on the power early in order to carry a lot of speed around the outside of the corner and keep Brayton from making an inside pass.

At this level so much of racing is mental. The rider has to keep his internal atmosphere adjusted to the point that allows him to race at his highest potential. This internal atmosphere, his feelings on the inside, have to remain calm, and he has to be able to stay focused in the moment. It's easy to be too nervous and excited but this only wastes valuable energy and dilutes concentration. At the same time you do have to be up for the task. It's definitely a balancing act. The primary key is CONFIDENCE. The only way to get that confidence is though hard work and sacrifice. Regarding the subject on "How Humans Develop Skills" all the scientific studies agree on one thing? In order to develop world class skills it takes 10,000 hours of dedicated practice. That measures up to 3 hours a day, 5 days a week for 13 years. And the only way one is going to do all that hard work and make all those sacrifices is through LOVE. You’ve gotta’ love it.