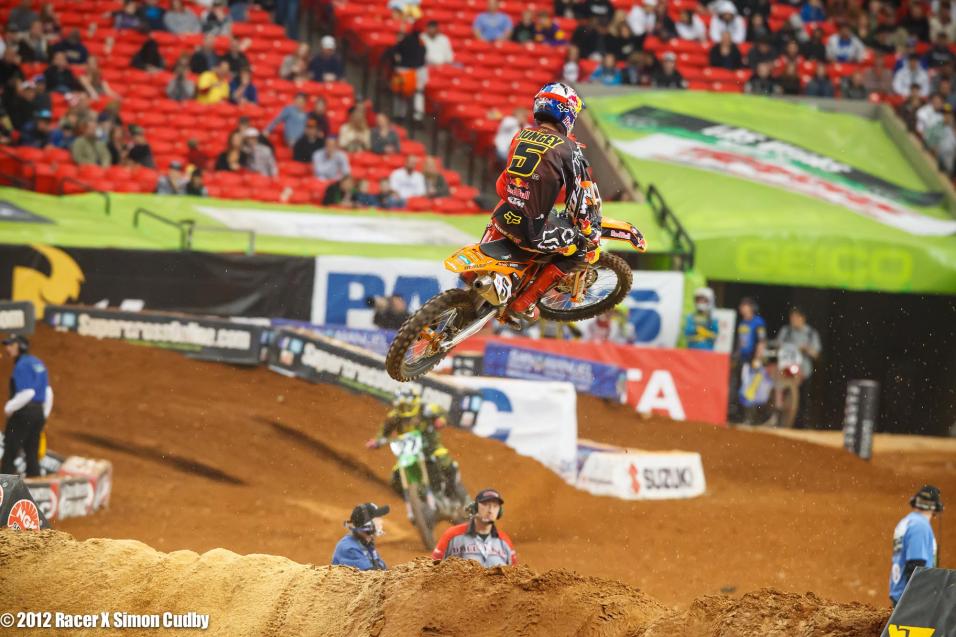 February 25, 2012 5:30pm
by: Jason Weigandt
Georgia Dome Atlanta, GA Atlanta Monster Energy AMA Supercross Championship
Practice is complete here at the Georgia Dome. The biggest story of the day? We hear the event may be headed toward a sell out of 71,000 seats. 71,000! Wow.

Other news: During the morning, people were buzzing about James Stewart and his struggles with the JGR/Toyota Yamaha this year. But then he went out and looked strong and aggressive in the first two practices, which then changed the buzz to…how strong and aggressive Stewart is riding. Could the east coast soil work better for the JGR team after they logged most of their testing at Stewart’s house in Florida? Well….

… the other big story was the rumor that Ryan Villopoto had the flu and wasn’t 100 percent. But in the final practice, RV was on the gas, attacking the track, and ended up logging the fastest lap of that session, even faster than Stewart. So much for that rumor! 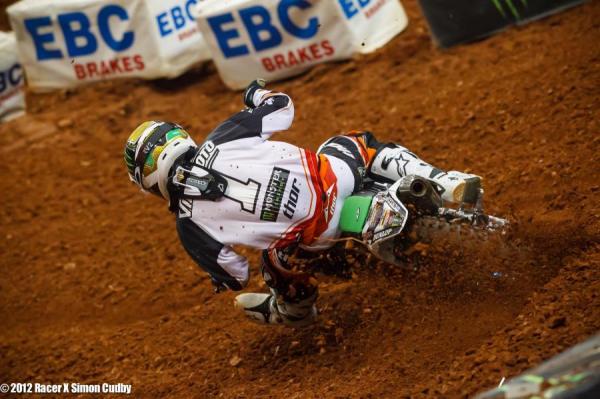 Will we get to run a photo like this and the old "This is all the competition saw of Ryan Villopoto" caption tonight?
Cudby photo

Villopoto’s trainer Aldon Baker confirmed that RV was indeed under the weather this week, but he started feeling better yesterday and then felt fine today. The illness isn’t an issue. RV’s best time was a 50.7 while Stewart ran a 51.1, so that’s a difference of four tenths of a second.

How about the rest of the SX class? Ryan Dungey was third fastest overall with a 51.3, then Davi Millsaps was fourth with a 51.7, followed by Kevin Windham’s 52 flat. Jake Weimer, Kyle Chisholm, Justin Brayton, Broc Tickle and Cole Seely rounded out the top ten.

In the Lites division, Justin Barcia was busting out fast laps and testing his rev limiter over every jump in the early practice sessions. He was fastest in the first timed session. There’s a tricky rhythm section here that really gives the Lites riders fits, they can go triple-triple-triple single if they get it right, but it’s not easy. Ken Roczen eventually got the section clean and really pushed it through the second timed session, and he logged the fastest time of the session (52.1), which became the fastest Lites time of the day. Kenny Boy then said he was going to take a nap before the heat races and come out ready for the night show.

In other news, Andrew Short is still out with a shoulder injury suffered two weeks ago in San Diego. Nico Izzi has been nursing  sore wrist for a few weeks and is going to park his 450 this weekend to try to get the wrist fixed. And Chad Reed is….not here. Bummer. We’ll see if someone else can step up and challenge Villopoto and his three-race win streak tonight. 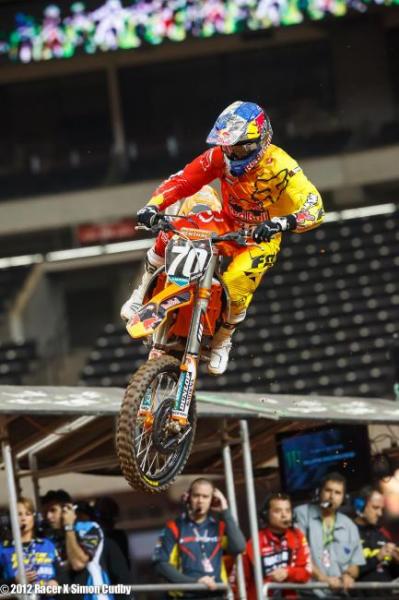