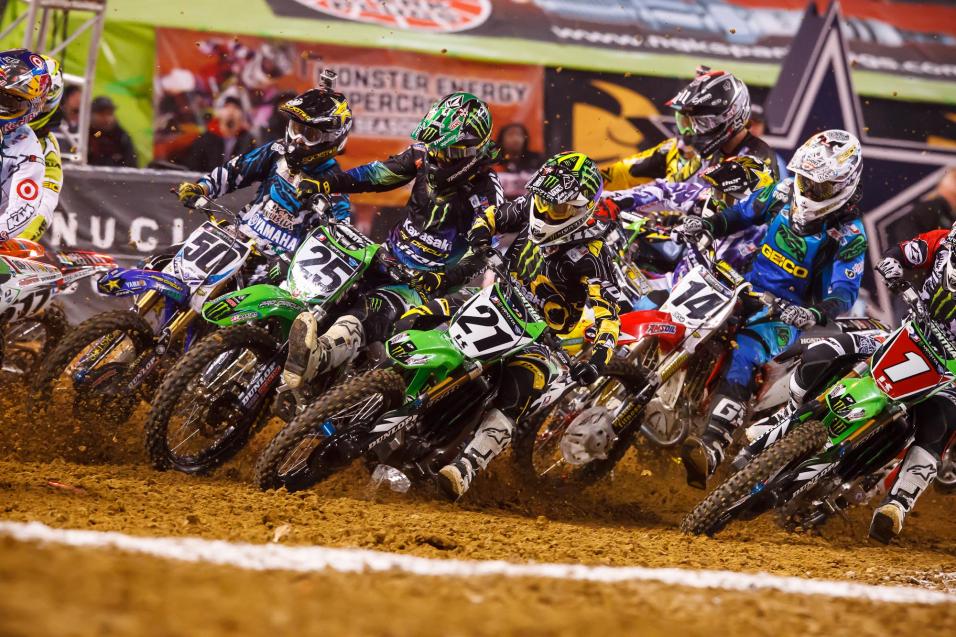 Advertisement | Advertise with Us
AT&T Stadium Arlington, TX Arlington (Dallas) Monster Energy AMA Supercross Championship
You can’t win a title in one night but you can certainly lose it, and that was the story tonight for Monster Energy Supercross in Dallas. The seventh round of the Supercross Championship and opener of the Lites East tour offered up battles, crashes and aggressive riding, and each race had a big impact on the prospective championship chases.

In the SX main event, two riders immediately established themselves as the class of the field—and it was the same two riders that battled last week, Monster Energy Kawasak’s Ryan Villopoto and TwoTwo Motorsports Bel-Ray Honda’s Chad Reed. The Alessi brothers, Mike and Jeff, actually fought for the holeshot, and Jeff took the award, but Villopoto and Reed shoved past them by the second turn and started pulling away from the field. 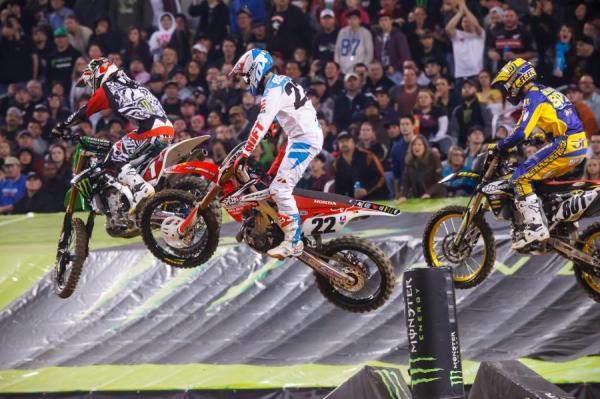 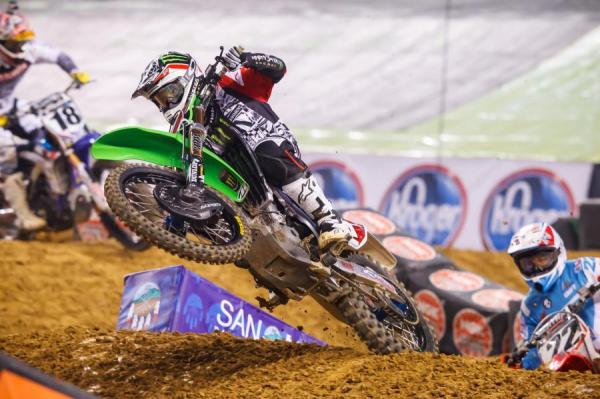 ...and stayed close for the first eight laps. 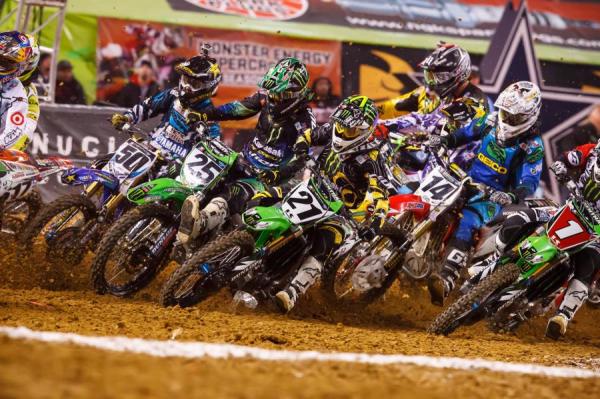 Weimer (21) had a good start and stayed in podium range throughout the night.
Cudby photos

Meanwhile Villopoto’s teammate Jake Weimer took over third quickly ahead of Mike Alessi, while Jeff Alessi began to fall back. Red Bull KTM’s Ryan Dungey was way back after a bad start, as a big crash off the start in his heat race left him with a terrible gate pick in the main. Worse yet was the night for JGR Toyota Yamaha. James Stewart had a bad start, and when his teammate Davi Millsaps lost the back end in a corner and fell, Stewart had nowhere to go and bumped into the back of him. Stewart then stalled his bike and went back to 19th place, with Millsaps picking it up in 20th. Stewart rallied back to sixth, Millsaps took 15th place.

Up front, Reed was and Villopoto were deadlocked in a battle for the lead. Reed was pressing Villopoto hard, and it looked like a battle to the finish was coming, until Reed crashed super hard in a sand section. He was tripling into the sand and making up ground, but came up short on that triple once, and over the bars he went. It looked like he would at least have a soft landing, but his leg got caught in the bike, and as the bike flipped, it pulled him hard by the leg. Reed didn’t get back into the race, and needed help from the Asterisk Medic Crew to walk off of the track. Rumors are swirling of a leg or knee injury for Reed, who tweeted that he’s heading to California to find out what is wrong. Regardless of the injury prognosis going forward, Reed looked fast enough to possibly take the win in Dallas, but instead ending up scoring just one championship point with a 20th place finish. One crash had a tremendous impact on the series. 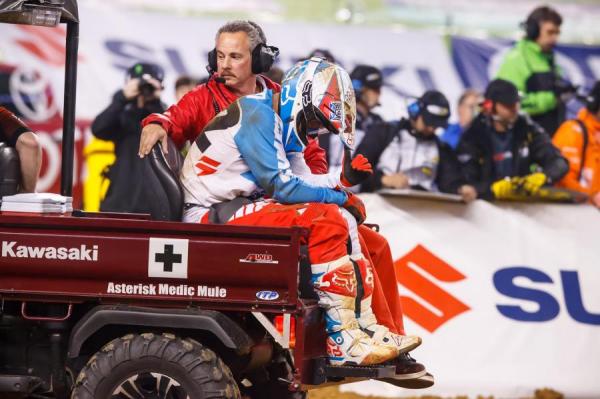 Reed was in pain after a crash and could not rejoin the race.
Cudby photo

From there, Villopoto cruised to an easy win, gaining huge points in the series. Weimer took over second and battled Dungey to the end to try to keep it. With two laps to go, Dungey made a move, but when he checked Weimer up, Weimer went back underneath to get the position back. On the last lap, Dungey stuck to the inside on a triple and stayed inside heading into the next corner, and then made contact with Weimer—a follow up to him running Weimer into the ground last weekend. The pass actually ripped the shifter off of Weimer’s bike and left him stuck in first gear, so even though Weimer had a shot at repassing Dungey, he didn’t have the drive to make it happen. Dungey took second with Weimer third. 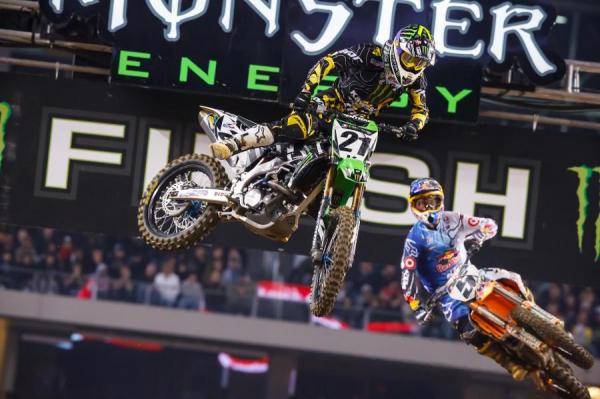 Weimer and Dungey had a huge battle for second that went down to the final lap. 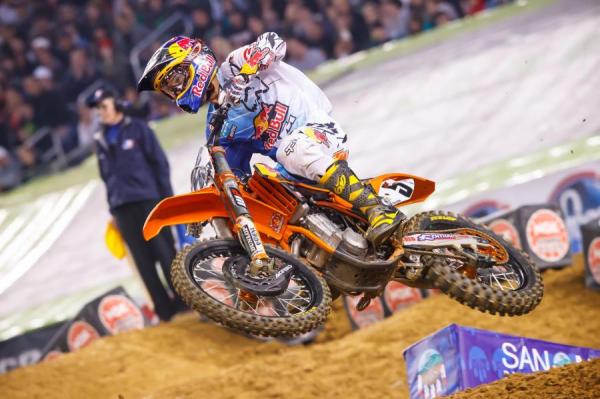 Dungey got the spot and also moved back into second in points. 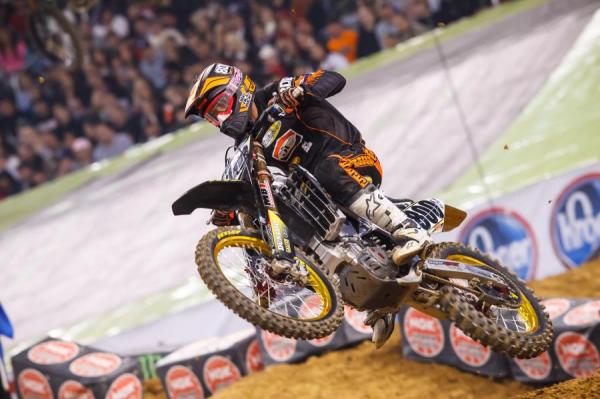 Crashes and told the story in the Lites East opener as well. GEICO Honda’s defending East Champion Justin Barcia took the win, but he did some battling, getting past his teammate Justin Bogle first before setting his sites on and Monster Energy Pro Circuit Kawasaki’s Darryn Durham. They battled a bit, and Barcia made the move down on the inside after the whoops to get the lead. Red Bull KTM’s Ken Roczen and J-Star JDR KTM’s Malcolm Stewart began rolling up on the group and Roczen got Bogle for third.  Then Stewart put a hard block pass on Bogle, cutting straight across in a bowl berm and putting them both of them on the ground. Stewart got back going quickly, but Bogle lost a ton of spots and finished 14th—he did give Stewart a slap on the helmet before he got away, though.

But other contenders had it worse—like Blake Bagget and Kyle Cunningham who went down off the start and finished way back. You can’t win it in one race, but, well, you know the rest. 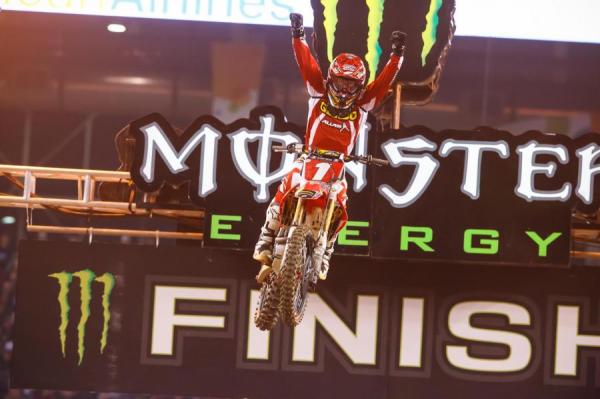 Justin Barcia felt like he rode tight, but he also rode well enough to take a win. 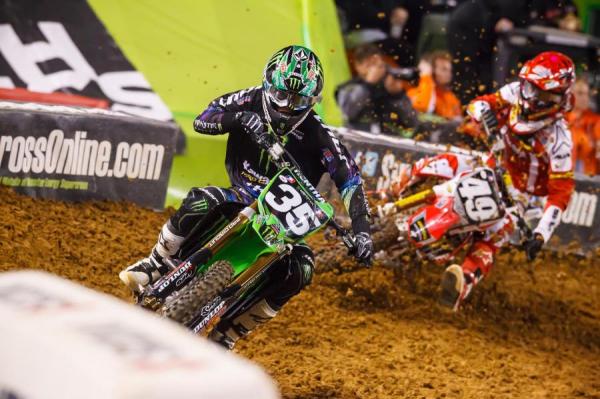 Darryn Durham led early and held tough against attacks from Barcia, Justin Bogle (49) and Roczen. He finished a solid second. 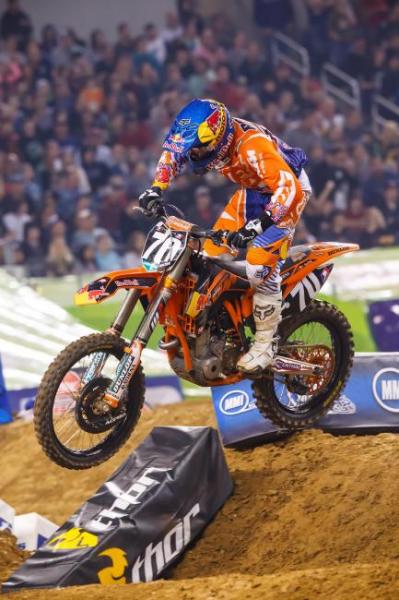 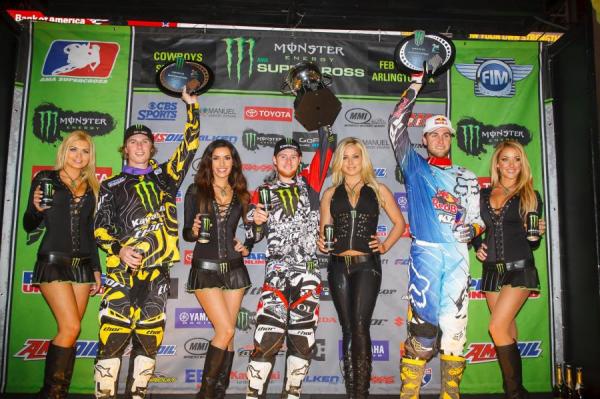 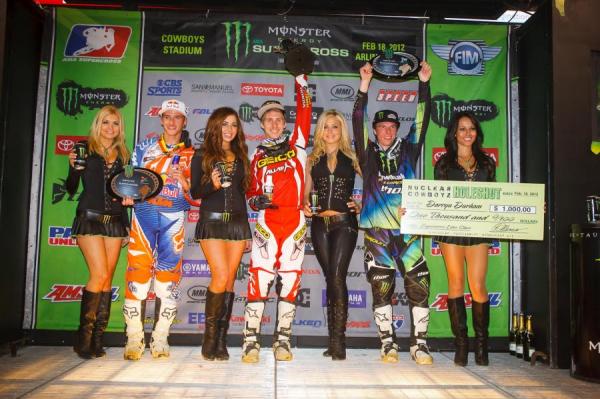