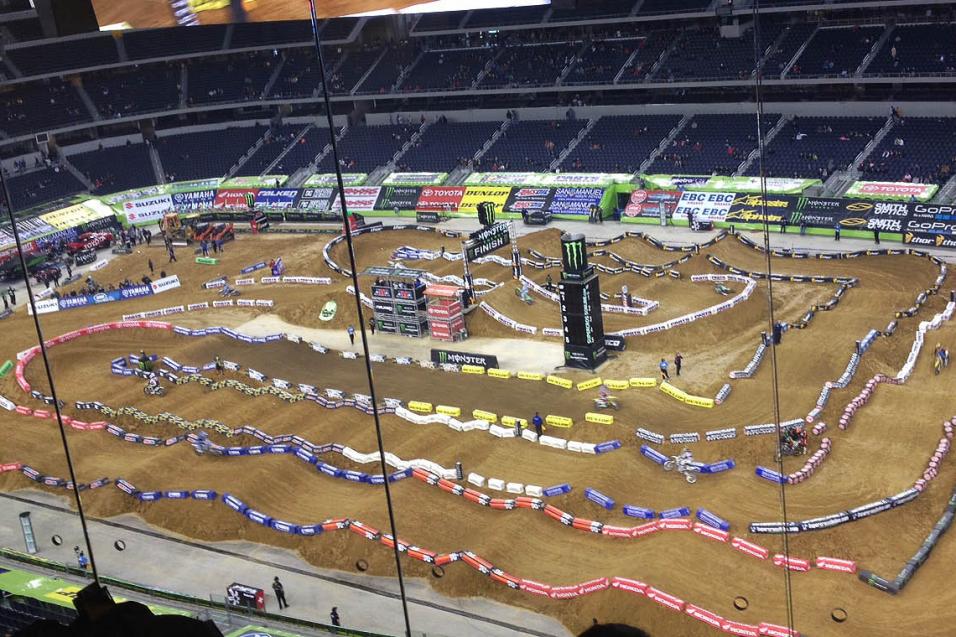 February 18, 2012 1:55pm
by: Jason Weigandt
AT&T Stadium Arlington, TX Arlington (Dallas) Monster Energy AMA Supercross Championship
Well, the riders have what they want here in Dallas: a football stadium and a football-stadium rectangular layout. After touring through a bunch of baseball stadiums to open the tour (which we do every year, yet this year the layouts seemed to throw everyone off) we’re back to the domed football stadiums—when you’re watching from the press box in Dallas, Indy, Atlanta, St. Louis, Houston or New Orleans, everything ends up looking the same. The stadium floors are about the same, so the layouts get a little more predictable.

But one difference in Dallas is the dirt—it is super, super hard packed here. That’s typical Dallas. Chad Reed was talking during the track walk and said you have to run the outsides here, it’s too slippery to try to make crazy things happen down low here. The track also features a few unique obstacles like a dragon back up and down with a double jump in between. Also there are two whoop sections, one is fairly simple but the other is pretty gnarly.

As the kickoff for the East Region Lites Championship, there are lots of new faces and even some new teams here. The Ohlins/Langtson Motorsports KTM team is in action for the first time, and other KTM squads like Munn Racing, Dragon Fuels AG Racing and Violation/Shea Racing are all racing for the first time this year. That’s six KTM teams out here including the factory Red Bull squad and J-Star JDR.

Justin Barcia is also debuting his red number-one plate on his GEICO Honda. Lots of other standouts to watch in this class, just check our East Lites Mega Preview HERE.

In the SX Class, we hear the JGR team went down to James Stewart’s house in Florida for more testing this week, and there will be big changes to his bike today.

In other news, we have heard that Eli Tomac has a small fracture in his elbow after last weekend’s crash in the whoops, but he’ll be back 100 percent for the next West race in Seattle. And we also hear Cole Seely may be racing Trey Canard’s vacated Honda Muscle Milk 450 next weekend in Atlanta.

But that’s next week. This week should be a good one, follow us on twitter @racerxonline for all the latest info. 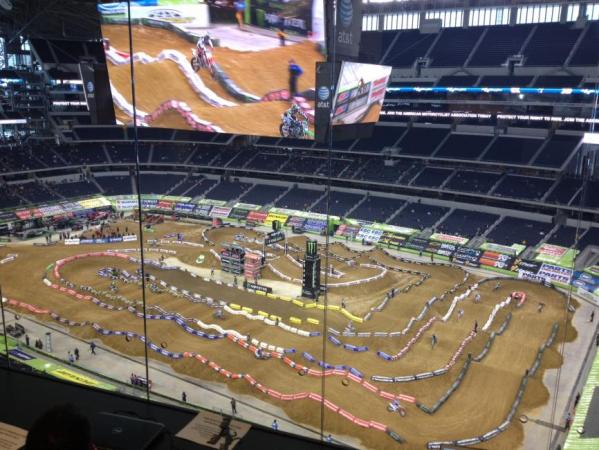