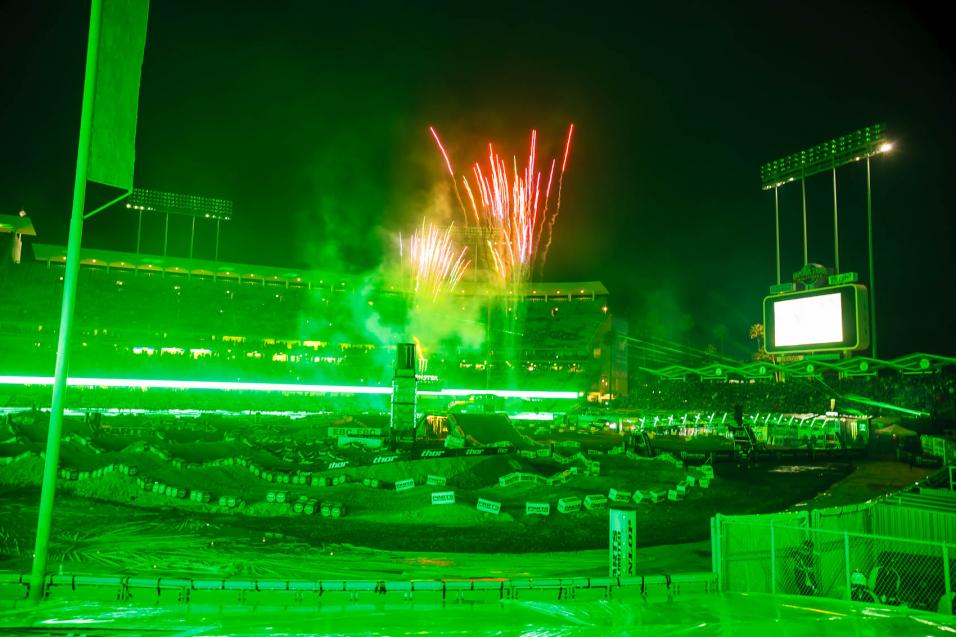 Advertisement | Advertise with Us
Dodger Stadium Los Angeles, CA Los Angeles Monster Energy AMA Supercross Championship
Fifth place finish last week in Phoenix? Sixth fastest in practice? Sounds like the perfect scenario for a Chad Reed win, as the Two-Two Motorsports Bel-Ray Racing Honda man has made a career out of rallying after it seemed like things were not going his way. The Reed win, combined with Eli Tomac’s Lites class triumph, makes for six main events and six winners in the early stages of the 2012 Monster Energy Supercross Championship.

Tomac’s dominant win in the 250 division wasn’t much of a doubter, since he had logged the fastest laps in the main events in the previous two rounds, and was also the fastest qualifier at this race, hosted in Los Angeles’ Dodgers Stadium. But Reed won the Supercross main in a different fashion, using his race craft and tenacity to win a battle with the likes of James Stewart, Ryan Dungey and Jake Weimer. Dungey ended up second on his Red Bull KTM, and Stewart third on his JGR Toyota Yamaha. Monster Energy Kawasaki’s Ryan Villopoto went off the track on the first lap but fought through traffic to get back to fourth.

When the gate dropped for the main, Villopoto and Dungey raced into the first turn together, and Villopoto wrestled the lead away after a few corners. But behind them, Trey Canard and Ryan Morais tangled on the first triple jump and went down in scary crash. Both riders were knocked unconscious, and the race was red flagged. It took awhile before both Morais and Canard could be taken off the track on back boards, and Morais took a trip to the hospital. Morias’ Rockstar Valli-Star team co-owner Bobby Reagan confirmed Morais had been knocked out, but regained conciousness and was moving his extremities, but later Morais’ wife Hannah tweeted that he had broken his jaw and had suffered three fractures in his neck. Muscle Milk Honda team manager Erik Kehoe confirmed similar news for Canard, saying the Oklahoma rider had been knocked out, but then came too and said he didn’t feel like anything was injured. Later, a report surfaced that Canard had fractured the T10 and T12 verterae in his neck. Racer X wishes both riders a speedy recovery and will provide further updates as they become available. 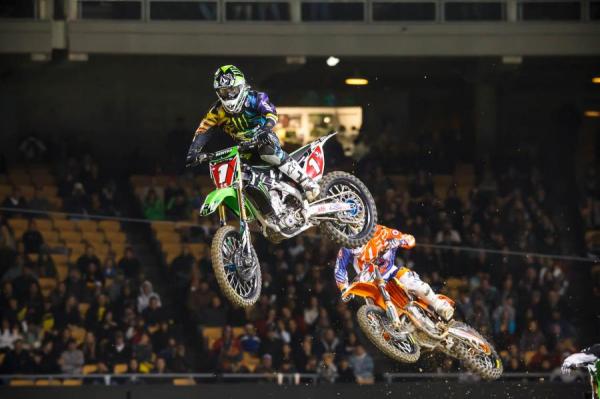 Villopoto and Dungey led off the start early. But then the race was red flagged. 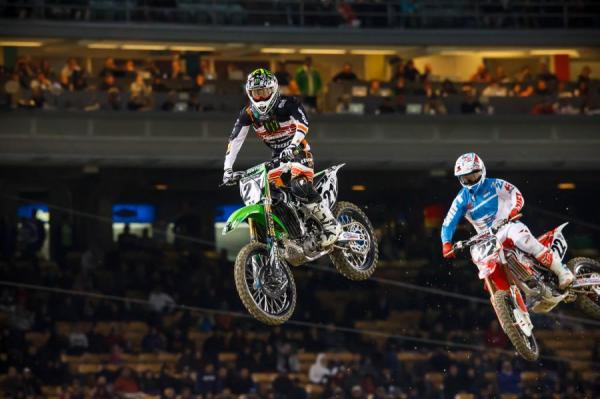 Weimer and Reed were up front the second time around. Weimer rode very well, but Stewart put a hard pass on him for second and Weimer went down.
Cudby photos

After the delay, the race restarted with a totally different scenario from the first start. Weimer grabbed the lead while Stewart maneuvered into second ahead of Reed. Reed and Stewart soon began to battle, passing back and forth at the end of the first whoop section. Reed finally made a pass stick, and then went after Weimer. They battled, Reed secured the lead. Stewart then went after Weimer and went for a big block pass in the bowl turn, taking Weimer down. Stewart settled into second before Reed and ahead of Dungey, but then he crashed in a corner—three crashes in three main events for Stewart. He dropped back to fourth, then repassed Yoshimura Suzuki’s Brett Metcalfe to get back into third.

Meanwhile, Villopoto was way back off the start after going off the track and then getting hung up on a tough block. From about 17th (Canard and Morais didn’t make the restart and Andrew Short went down in the first turn), Villopoto clawed forward like he did last weekend, this time getting to fourth. He had Stewart in his sights with about five laps to go, but Stewart held him off. It came down to the final lap, with Villopoto close and looking to make a move, but he couldn’t produce a serious pass attempt.

Up front, Reed found his groove and inched away from Dungey to take the win. Dungey’s second, though, gives him sole possession of the championship points lead. 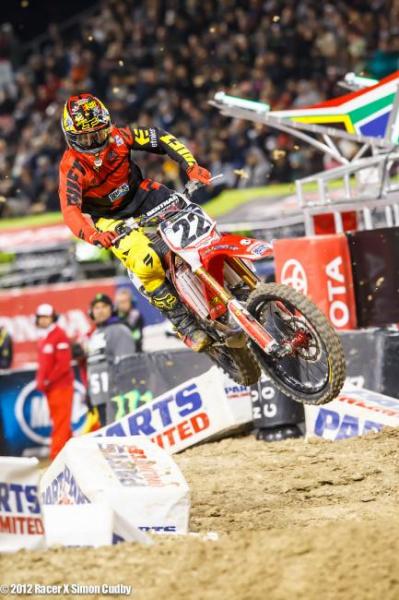 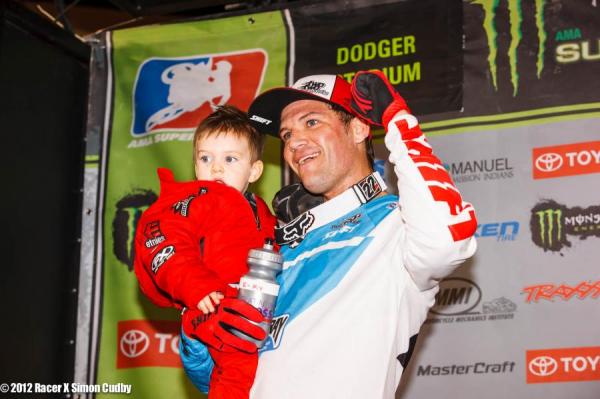 But it came together on the right time to grab win. Reed's son Tate enjoyed it as well. 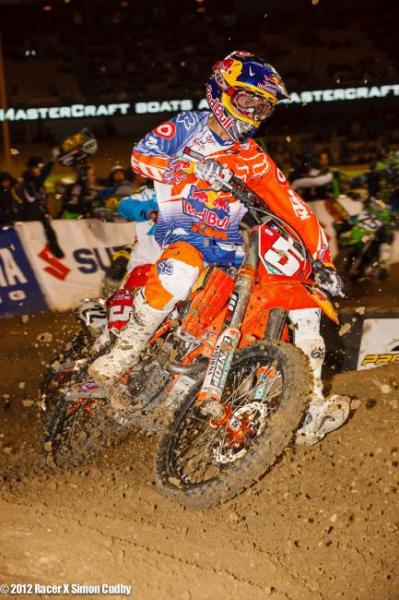 Dungey rode well and now holds the points lead by himself. 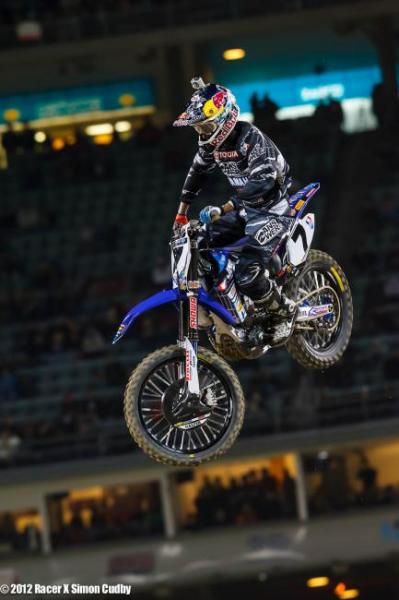 Stewart was running second but suffered another crash. He finished third.
Cudby photos

Behind the Stewart and Villopoto battle, which went down to the wire, Metcalfe took his best finish of the year with a fifth.

In the Lites class, Tomac had not been struggling for speed as of late, but his starts had been lackluster. He figured it out this time, getting a good start in the main behind Martin Davalos, and then quickly making the pass for the lead and taking off. Cole Seely, winner of the opening race of the year, looked to have a good start but got bumped off the track and went to the back. A second crash held Seely to 15th.

As Tomac pulled away, Davalos crashed. This opened the door for Zach Osborne on his Bike It Monster Yamaha, but Monster Energy Pro Circuit Kawasaki teammates Dean Wilson and Tyla Rattray were on the move. Wilson made the move for second, but Osborne held on for third, an impressive ride considering he hasn’t raced supercross since moving over to the GP series in 2009.

Tomac’s dominant performance was also enough to put him into the championship points lead, and he doesn’t look at all willing to give it back. But in a season of six winners in six races, it’s hard to say what will happen next. 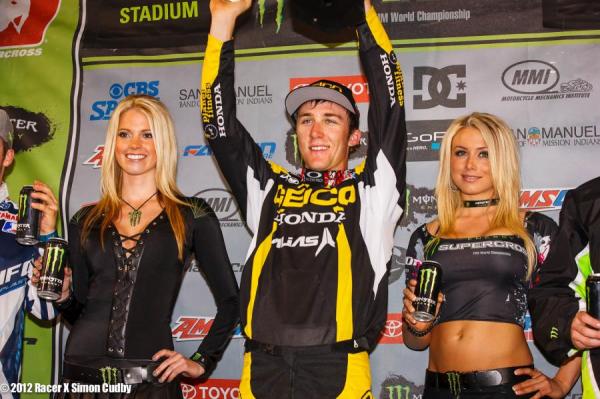 Tomac is on the center of the box. 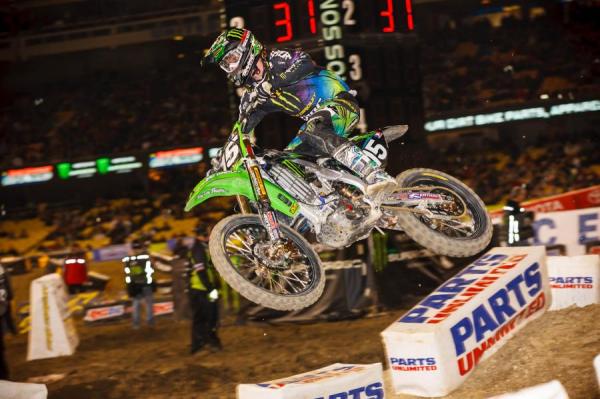 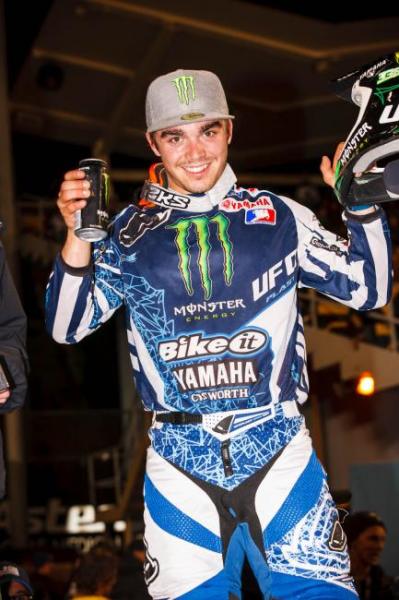