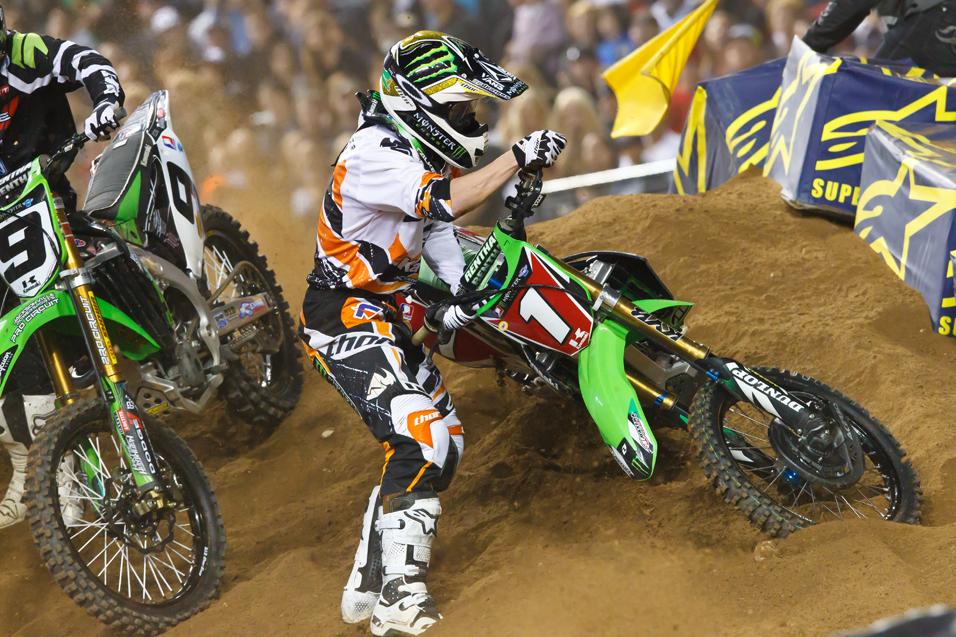 The Moment RV Goes Down and Back Up

Advertisement | Advertise with Us
Chase Field Phoenix, AZ Phoenix Monster Energy AMA Supercross Championship
Ryan Villopoto seemed to pack the same speed he did at Anaheim in Phoenix, but any chance of winning again went away as soon as he crashed on lap one in the sand. That one moment changed the race completely, with RV1 switching from going for the win to trying to limit the damage.

He did a superb job by coming all the way back to third. We talked to Ryan about that race-changing scenario, and his ride through traffic to make up for it.

Racer X: I don’t have any confirmation, but I think you were 18th when you went down, and you came back to get third. Good ride.
Ryan Villopoto
: Not bad, huh?

Yeah, what happened when you went down?
Davi [Millsaps] actually went down in front of me. Like right in front of me in the sand and that collected me up with him. 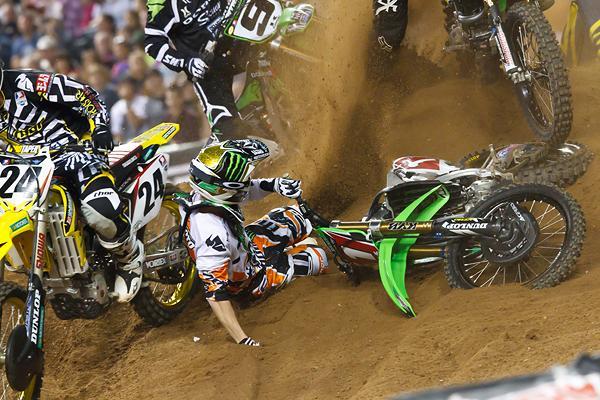 Villopoto would rebound from a first lap crash to get third in Phoenix.
Photo: Simon Cudby

Bummer.
Yeah, it was a bummer for sure.

James Stewart went down in the sand too.
Yeah, he did a couple laps later. So I felt like my bike and myself were on all day and the win was not too far out of my reach. Yeah, I felt good. Then that happened, so it was like you have 20 laps to make something happen.

You fell in the heat too. What’s going on?
Yeah. That was my fault. The second one in the main wasn’t my fault. Wrong place, wrong time.

So you’re not a crasher? That’s not gonna’ be a headline?
Well, I don’t know, is it? You’ll probably write whatever.

I know you seem like you’re on it this year, but when you got up, did you think you’d get third?
Actually, I didn’t know that the last lap was the last lap. I thought I was fourth when I got Kevin [Windham]. I was waiting for Mikey [mechanic, Williamson] to get on my bike and go back up to the truck. 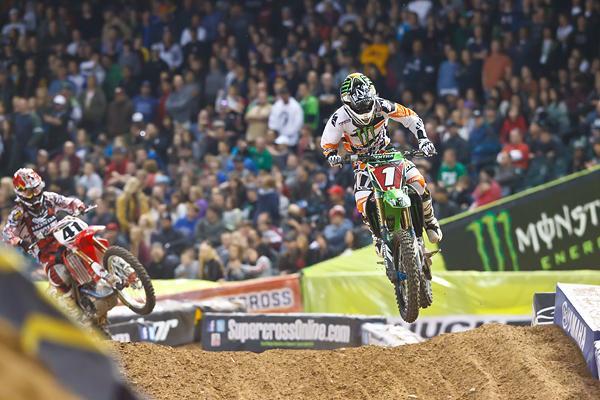 All in all, with the crashes in the heat race, and crashing in the main, it’s got to be pretty good to come out with a podium.
For sure. Like I said, I felt good all day and the bike was on and the start I had, obviously it wasn’t the holeshot, but it was just in the top five. It was right there. But, what can you do sometimes, you know? I felt really good through the whole 20 and I pushed every lap until the end.

Ryan Dungey won tonight and your teammate Jake Weimer got his first podium, so a few surprises up front.
Yeah, I think there were big surprises for everybody tonight. Seemed like a lot of chaos was going on in the back. I wasn’t up there to check Ryan [Dungey], but clearly he was riding good.

What were your thoughts on the track?
Phoenix is always a tough track to race, it’s really slippery. It’s tough to have a good bike setup and throttle control and the whole package. So, I thought the track was pretty good for Phoenix, I should say.