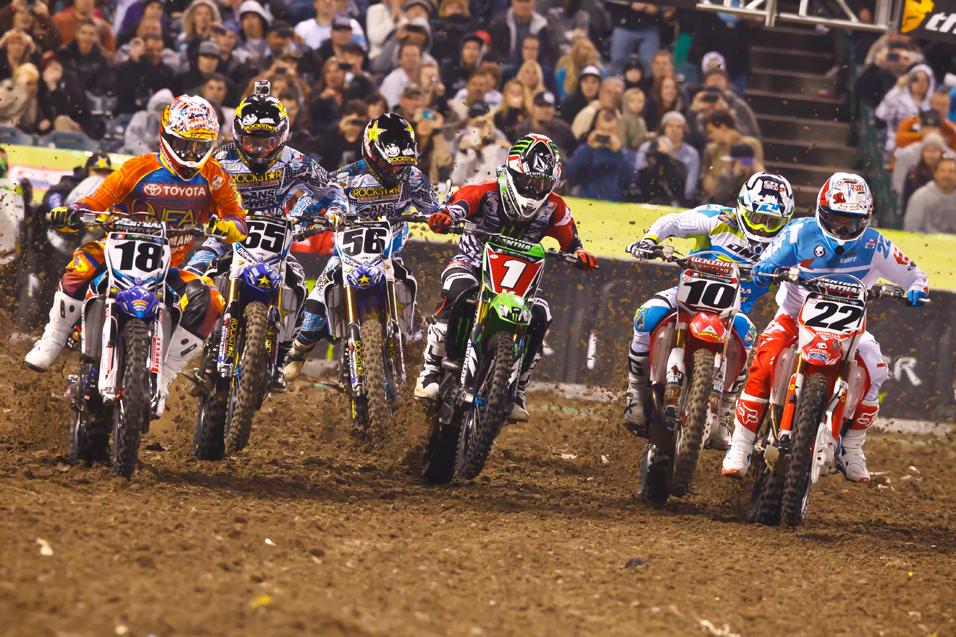 
When I'm working on starts with my rider. The one thing I always keep reiterating to them is, "The start is won and lost in the first 30 feet out of the gate."

The first 30 feet out the gate is when you want to make sure your technique and form are spot on.

In the following photos I will break down what went wrong for some riders, and right for others, off the gate at Anaheim 1. 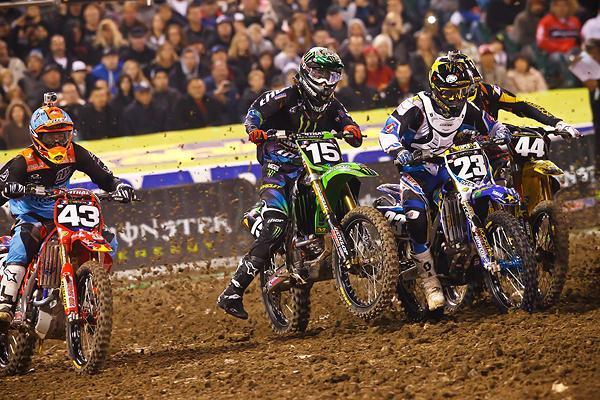 At first glance notice the color of the dirt. See how dark and tacky it looks. That means the bike will get a lot of traction and the tires will "grab" once you release the clutch.

Now when you look at Dean notice how off centered from the bike he is in the photo. Wilson's bike definitely got a lot of traction here and it was hard to keep stable and straight. Here's why:

Dean’s bike got a lot of traction and got sideways, causing his starting device to come unhooked. Look at his front fender, see how high it looks. Now look at the Yamahas. See how their front is locked down. When the starting device stays hooked, the front tire stays down on the ground.

When the bike goes crooked and the front end comes up, like Wilson's bike, you have to double clutch it to get the front tire back on the ground. And then you have to ease off the throttle, all of which Deano does in this pic, causing his starts to be sub-par at A1.

It's hard to control a 250f on tacky dirt but it's twice as hard (literally) controlling a 450.

At first glance it looks like Chad Reed does everything right in this photo. Notice how glued to the bars he is with his chest. That's hard to do when your riding powerful bikes like these riders. But the big thing about Reed here is how centered his head is with the bars. Look at how it’s not shifted to the left or right like Brayton’s (10), Villopoto’s (1), and Stroupe’s (56) bike.

Typically the bike goes where the head goes. Notice RVs head drifting right, and his bike is starting to drift the same way—same with Brayton in the second sequence.

Reeds form looks good in these photos however notice how low his elbows are, it’s not a bad thing though. They’re not always this low. He drops them back and his shoulders forward as he releases the clutch, and as the gates dropping. This way if he gets a bad jump his elbows won't lock with other riders, and he can go underneath them (Ricky Carmichael use to do this).

In the same motion when he drops his elbows he drops his chest forward. He does this so the front tire will stay down so he doesn't wheelie out of the gate. 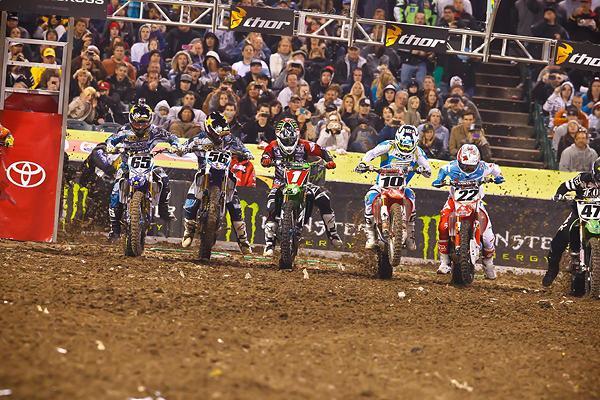 In photo 2 it looked like RV was drifting right and was going to get a bad start. Here in photo 3 he seems to have corrected and is on his way. Here's how he did it.

RV gets a lot of holeshots cause of his great reaction time but also his ability to put his feet back on the pegs very quickly out of the gate. He does this in every start. Before he shifts up to third he picks his feet up, puts them on the pegs, stands up and gets into the attack position (like a horse jockey).

When you're standing up in the "attack position" like RV is here your getting the most power out of your bike. His small stature is what allows him to do this so fast with such precision right out of the hole like this each time.

Notice Reedy's shifting foot is turned out but still on the ground. Unlike everyone else in the photo, Chad shifts with his heel not his toe. Shifting this way allows him to still stay glued to the front of the bike and with out lifting his head up to catch third gear. (Jeremy McGrath used to do starts this way).


Matt Walker is a former professional motocross racer that now focuses his time and efforts on training the best up-and-coming amateur riders in the world. Walker has recently been approved by the state of Georgia to open one of the biggest motocross academies in the country. The new academy is scheduled to open February of this year. For more information on the academy and Matt Walker’s schools visit his website www.schoolofmotox.com.