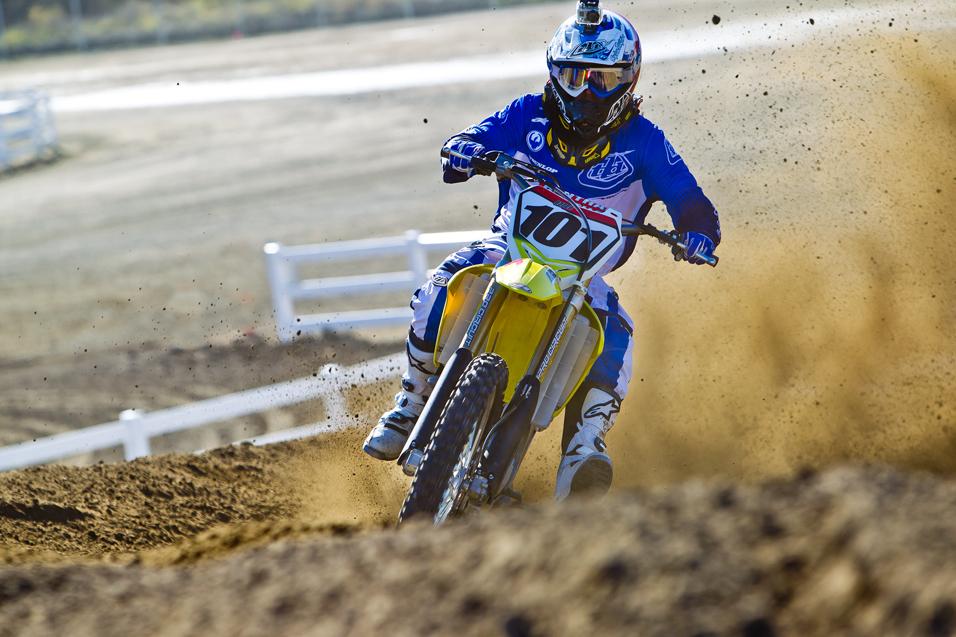 Recently I've noticed that a lot of riders in Racer X videos are doing  "goon" riding at the end of their video segments.  I don't want to sound paranoid or anything, but every time I see these guys doing that I take it personally. Sure, I may come in nose high a few more times than the next guy, but now I have to worry that even if I clear the big double I may still look like an idiot doing it? I'm curious to learn your take on this growing phenomenon of "goon" riding. In your opinion, what is the origin, essence and significance of "goon" riding?  Thank you in advance for your answer.

No Name/Number on Jersey

I see your point. I mean, it’s not like Kobe Bryant is shooting clips of himself double dribbling, stumbling down the court and then firing the ball into the rafters with an errant hook shot. And Tim Tebow doesn’t post videos of him fumbling around with the ball and then throwing it left-handed into the back of his center’s head. But I’ve got to be honest here… If they did post those kind of videos I would be the first one to watch them…and I would laugh my butt off! I’m a basketball/football fan and yet there isn’t any way I would take offense to a player making a funny video like that. So, for you to get balled up because your favorite rider does an air wheelie is ridiculous. Lighten up and don’t take yourself so seriously. And, yes, you probably still look like an idiot jumping that double. Sorry.

"Speaking of Byrner, I wonder if he will go back to wearing a neck brace after his crash? He has been riding with Reed, who is an outspoken proponent of the devices"

I pulled the above quote from a recent racerhead. I was under the impression that Reed does not like neck protection. I have heard you say as much on the recent podcast you did with Canadian hero Steve Matthes.

My question is this. Were you perhaps home scooled? I can't help but wonder if you were trying to sound smart and overcompensate for your lack of a education by using a word to large for your intellectual capacity.

Next time check dictionary.com to make sure the work is used in the proper context. It only takes but a minute.

I’ve pasted your email in here exactly as you sent it to me. Thank you for catching my mistake in last week’s Racerhead. I was in a hurry and I mistakenly wrote proponent when I clearly meant to write opponent. My bad. But do you have any idea how ironic it is that your email to me about my grammatical shortcomings is so rife with mistakes? This is like Christmas for me, really. Here are a few oversights that I found: There should be a comma after Good day, Racerhead should be capitalized, there should be a colon after My question is this, you should have used an instead of a when discussing my education, you should have written too instead of to and this is the best one… you spelled school wrong… Twice! You, sir, are a jackass. Actually, calling you a jackass is an insult to pack mules everywhere. You should put on a helmet so you don’t hurt yourself, drop out of school immediately and start mastering the craft of frying sticks of potato in oil because that is what your future holds for you. Good luck, dummy.

Dear Ping,
While checking out a weekly post on another publication's website I ran into the following picture.  Now, I've heard of FUX gear, and SHIT gear, but SLUTT bikes????  Really?  I thought those guys didn't condone that type of advertising. I can just imagine what the catchy slogans are going to be......   Have fun with this one. I can hear your internal filters working overtime already.

I did a Google search on Slutt Bikes and found that they are actually an elite race team in the bicycle world. In last year’s Tour de France they had several top finishing teams, including a Lithuanian squad who are very particular about their equipment. The bad news is that the company’s owner requires all team athletes to ride in thong underwear and train in Amsterdam. The good news is that you get free gonorrhea checks and penicillin shots while under contract. Word in the pits is that RV’s mechanic, Mike Williamson, looks great in a Speedo. Maybe he’s plugging the brand to see if he can get a support ride with them? Good luck in next year’s tour, Mikey!