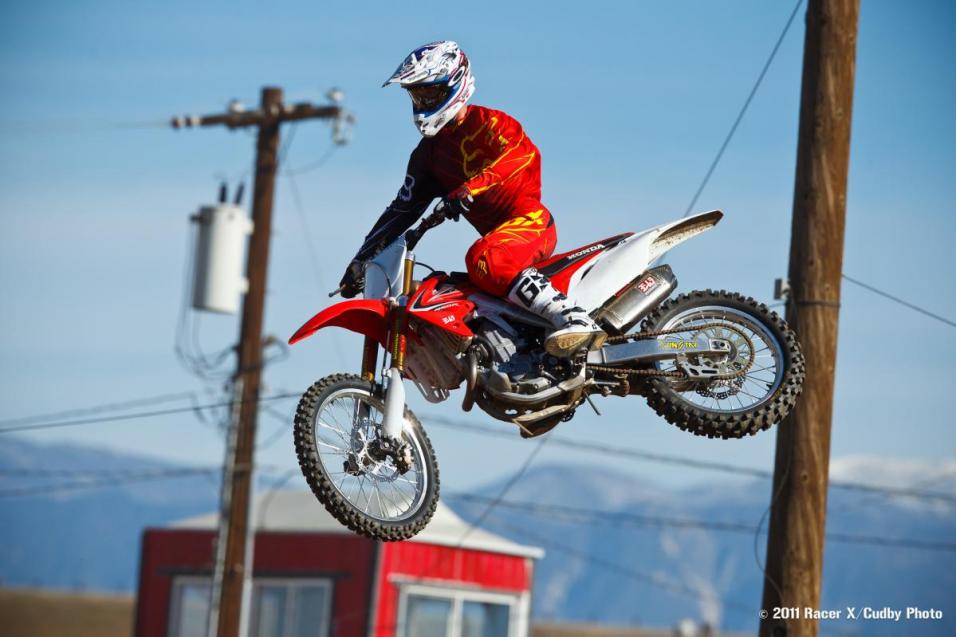 Advertisement | Advertise with Us
Angel Stadium Anaheim, CA Anaheim I (A1) Monster Energy AMA Supercross Championship
Former national winner Tommy Hahn is certainly taking the hard route this upcoming supercross season. Although at times, he showed some speed and had some results, he’s been unable to stay healthy and show his speed on a consistent basis. T-Hahn’s had a couple of years that he’d like to forget, but for 2012 he is taking a step backwards to go forward.

We caught up to the privateer Honda rider to find out his thoughts on the upcoming season.

Racer X: Tommy, thanks for doing this. Can you fill us in on your program? You’ve been out of sight, out of mind a bit.
Tommy Hahn: Yeah a bit. I started riding supercross about three weeks ago actually. I took a long time off to heal from my shoulder injury and make sure it was 100 percent. So that took a while and I got on the bike a bit late, but I honestly wouldn’t really know. I’ve always started supercross after a vacation or taking time off and dreaded starting it. But this time, I was excited and couldn’t wait. I rode two weeks of outdoor stuff, got my supercross suspension and have been hitting it since then. Being in shape to start riding is much better. It’s been a huge weight off my shoulders because I was wondering how I was going to feel. From outdoors to supercross, there are certain things with each that affect your body.

My bike is awesome, Factory Connection helped me out a lot in the suspension department and I’ve been riding with Ivan [Tedesco] a bit out here in California. I feel like my speed is there, I just have to clean some things up and work on my intensity a bit. That will come as I start racing, but for a first starting point, I’m pretty good. 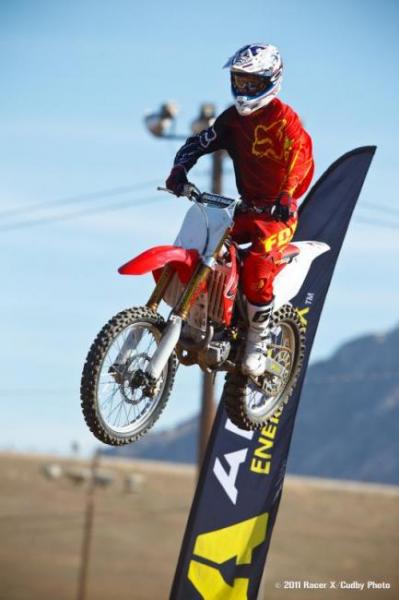 Hahn is back on the Honda for 2012. A bike that he feels fits his style.
Photo: Simon Cudby

One of the things about starting late is maybe you don’t get burnt out and you peak later and finish strong. Some guys might be a bit burnt out from going hard for a couple of months on a supercross track.
Yeah, I agree. Last year I got on my bike in October and worked hard to try and get it set up for me. I did a lot of riding and you’re right, by Anaheim I was like, “Man, the season is just starting and I feel like I haven’t taken a break.” But this year I took a huge break from Unadilla all the way through November. At one point, I just sat around and did nothing to let my body heal. I just switched everything over at one point and made it as strong as I could. I just did the stuff that I had to do. My mom has actually been helping me out in the gym a bunch and she’s always helped me out when I was younger. If I had known how gnarly she was, I would have been training with her the whole time! She’s always just let Wil and I do our own thing but she’s great in the gym, she used to work in one.

I feel great, like I said I feel comfortable and happy with everything that’s been going on. I don’t have to worry about my shoulder falling off and I feel like I’m riding really good. I couldn’t be happier.

You’re taking a bit of a risk here, you turned down some decent rides to do your own deal, with your own program. Do you realize the situation you’re in?
I wanted to ride a Honda, I started my career on a Honda and I’ve ridden my whole amateur career on Honda’s. I just feel like that is the bike for me and I have great support from Factory Connection with the suspension, and my motors are coming around. I basically have my set-up finalized, a buddy of mine is doing my motors and I honestly feel like I’m on the best bike I’ve been on since I got to the 450 Class. I’ve always sort of dreaded supercross and liked outdoors better since I got on the big bike but that’s changed now, I’m excited to ride supercross and I’m learning it all over again.

I took a step back to hopefully take two steps forward. I know a lot of reasons why I didn’t get what I wanted was because of my results in supercross. So I figured, okay, let me get on the bike that I want and if I suck, it’s because of me and I can’t blame anyone else. I wanted to get on what I was comfortable with and I wanted to stay in Texas and not come out until I was ready. There have been so many people that have been helping me. My agent Steve has gone above and beyond anything I could have asked for in getting me sponsors, and my brother has been helping me. Ziggy, Peter and LaRocco at FC have been helping me out a ton. I feel like with my feedback and my knowledge, I felt like I could set-up the Honda the best I could. That’s the route I went, now I just need a start. I can do twenty laps, I need to figure out where I need to be. My goal is to be top ten and if I start tenth, or twelfth or whatever, I’m not going to freak out like before. That’s what has hurt me in the past, I would try harder and harder when I freaked out and then the crashes would come. I just wanted to step back, take a breather, get in shape and go for it.

I don’t think this is a bad decision, I’m not getting a paycheck and financially this is tough. I want to be on a good team again and I feel like I should be. I’m just really happy right now and that’s something I haven’t been in a while. 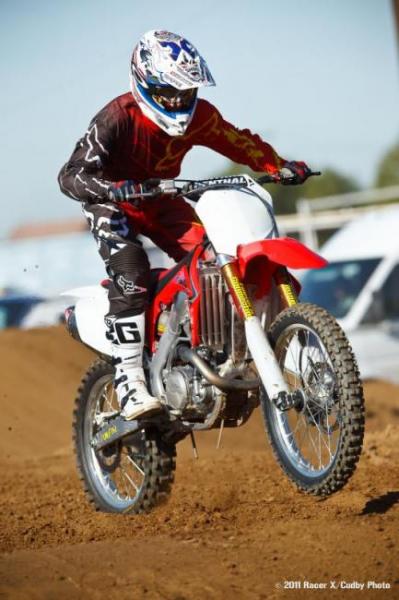 Hahn will be going the privateer route for 2012.
Photo: Simon Cudby

Yeah, that’s hard to put a price on: being happy.
Yeah exactly, and nothing against those teams that tried to hire me, but I had an idea of where I wanted to go and it didn’t happen and sort of deflated me. I didn’t want to use anything as an excuse. I’m being very humble, I’m happy and I think that’s going to show in my results.

It’s going to be interesting for you. The question I have is what if someone needs a fill-in rider, even on another brand, would you jump in?
Absolutely, and I would love to stay on a Honda. That’s basically what I set myself up for. If another factory team needs me as a fill-in, I wouldn’t hesitate going and my sponsors know that. We’ve let them all know about that. There are so many people that have helped me out, I can’t say enough about them. That’s not how I want to get a ride, seeing someone get hurt-- that sucks, but that is where we’re at in this sport today.

Who do you want to thank?
I want to thank my parents and my brother for sticking it out with me and helping me with this deal. It’s been difficult since I didn’t get a deal and I even thought about going back to school. My parents and my brother all thought I was crazy for that, I just turned 26 and have a lot of years in front of me. I want to thank Altus Motorsports in Oklahoma, Brian Siroki bought me my bikes and suspension, Factory Connection for the help there, Shoei, Fox, Oakley, Gaerne, Deft Family, Yoshimura, Dunlop, Dubya, Cycra Plastic, CRF Stuff, Moto Tassanari, my agent Steve Aldalco, Rockwell and One Industries--just everyone who has been helping me has been great. I couldn’t have done it without all these people and more.

I’ll tell you what, I do not want to start my own team. That’s way too much work, I have no ambitions about that despite some stuff I had read. I just want to restart my career. It will be a good year, I’m going to do the west coast races under the Rockwell truck, Dallas, Houston and maybe a few others. I just can’t afford to do the whole series, and I want to do all the outdoors so I need to save up. I’m looking forward to motocross on my own bike. It should be great.