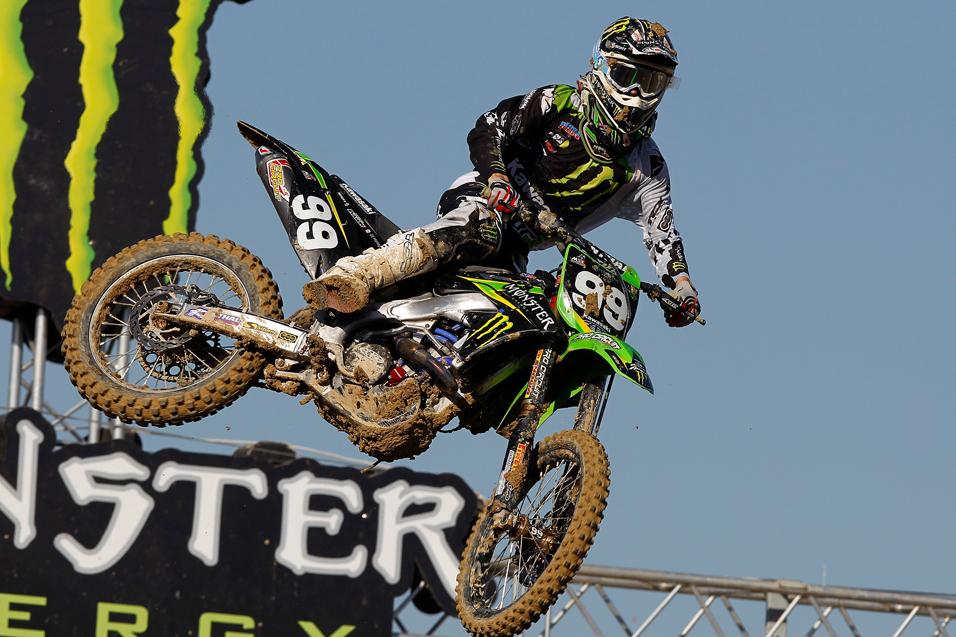 Advertisement | Advertise with Us
The FIM Motocross World Championship closed under the relentless glare of Italian sunshine at Fermo for the fifteenth and final around of the series. But there was still time for some late drama in the MX1 and MX2 categories.

MX2 belonged to Red Bull Teka KTM’s Jeffrey Herlings for the fifth time in 2011 as AMA-bound teammate—and new world champ—Ken Roczen elected to tackle the steep hills of Fermo hard-pack with a 125 SX two-stroke. Herlings duelled with CLS Kawasaki Monster Energy Pro Circuit’s Tommy Searle on this occasion and grabbed the top step of the podium thanks to his second moto chequered flag—the pair shared victories and second positions.

In MX1 Monster Energy Yamaha’s Gautier Paulin clinched a superb maiden win in the class. The Frenchman rode Steven Frossard’s works YZ450FM after the latter was sidelined with a chest infection in the wake of his crash in Germany last weekend. 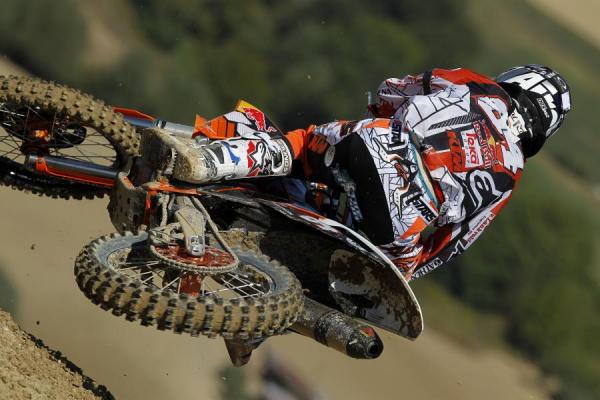 Herlings would go 2-1 for the overall in Italy.
Photo: Ray Archer

Paulin is making a habit of star turns in the premier category as those who can remember his surprisingly dominant second moto triumph at the 2009 Motocross of Nations can testify. That the 21-year old came to climb on the 450 was thanks to a rapid turnaround by his team when it was clear that Frossard would not be able to participate and that Paulin would not be moving up or down from fourth place in the MX2 standings regardless of other people’s efforts in Fermo.

He aced the pole position and the first moto with a deft handling of the bigger bike to suggest he will be another viable force in the MX1 class in 2012 when he switches to the factory Kawasaki set-up. The second moto saw a more cautious approach, and on an increasingly bumpy terrain Paulin battled with Christophe Pourcel (another ‘Jekyll and Hyde’ Grand Prix with eighth and a lack of feeling on a bike he described as too stiff in the first outing) before erring on the side of caution. Pourcel escaped to the finish line first for the third time in as many meetings.

“For sure I am really happy and I didn’t really know what I could expect for my first MX1 GP,” said Paulin. “In the first race I made the holeshot and was on my own so I set my rhythm and just rode out the moto. In the second it was really good fun to race with Christophe and we passed each other but the track was getting harder and harder with more bumps; normally it is smoother for the MX2 motos. It was my first race on the 450 and I knew I was winning the Grand Prix so I did not want to go crazy. I was riding safe. With Monster Energy Yamaha we did something special today.” 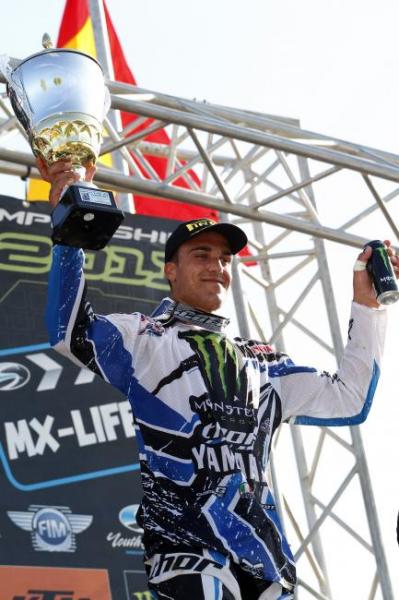 Kawasaki Racing team’s Jonathan Barragan booked-ended a forgettable year with third place to match his only other rostrum appearance seized at the season-opener in Bulgaria. The Spaniard cited poor starts and a lack of confidence for a lowly run of results and is unlikely to be a factory rider in 2012.

Other news in MX1 involved the confirmation of positions in the final championship standings behind the ruling Tony Cairoli. The Sicilian, who like Roczen was set to steer a two-stroke at Fermo, missed his home Grand Prix after his mother passed away through illness on Friday. Tony posted on his twitter account that his fifth world title was in her honour. It was a hard weekend for the KTM team as Max Nagl needed only 33-points to bump Frossard from second place in the world but the German landed heavily from the finish line table top on Saturday and fractured his right wrist. He valiantly tried to race on Sunday (having painfully completed the sighting lap of the heat race on Saturday afternoon) but pulled out of the first moto while tenth. Frossard had his runner-up position, despite not scoring in the final four motos of the season.

Honda World Motocross team’s Evgeny Bobryshev needed two wins to unseat Frossard but the Russian struggled in the heat and only managed enough points to take fourth from the luckless Nagl. The German’s injury has now weakened Team Germany for the Nations with the replacement yet to be confirmed. 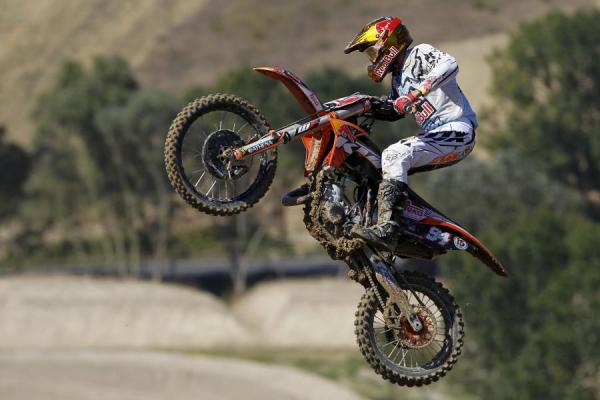 Roczen would take fifth in moto one on the two-stroke, but would crash out of moto two.
Photo: Ray Archer

The last bottle of champagne in MX2 finally went to CLS’ Max Anstie. The elusive podium result—after six fourth positions in his rookie GP year—finally arriving at the expense of Bike it Cosworth Wild Wolf’s Arnaud Tonus who tied on points but fell into Anstie’s former ‘rut’ with his own second consecutive fourth spot. Full credit to former GP winner Nicolas Aubin who was fifth overall with 6-3 but had to fire back from a first moto crash to get near the front. The Frenchman will focus on British Championship races in 2012. Young Austrian Pascal Rauchenecker set a personal best with sixth in his maiden GP term.

Roczen was always struggling on the two-stroke and visibly lost ground on the hills that were too steep to contemplate walking. Despite looking the contrary, Roczen claimed he enjoyed the experience and although a second moto crash when he landed hard in some ruts forced a DNF he remained breezy about missing the podium for only the third time from fifteen and certainly didn’t seem too disappointed in the Red Bull party later on in the paddock!

“I think it [using the two-stroke] helped my riding although it probably wasn’t the best track for a 125,” he said. “I struggled to make some the jumps but it was OK. I’ve had the busiest week ever since winning the championship and could only ride the bike on Thursday.” 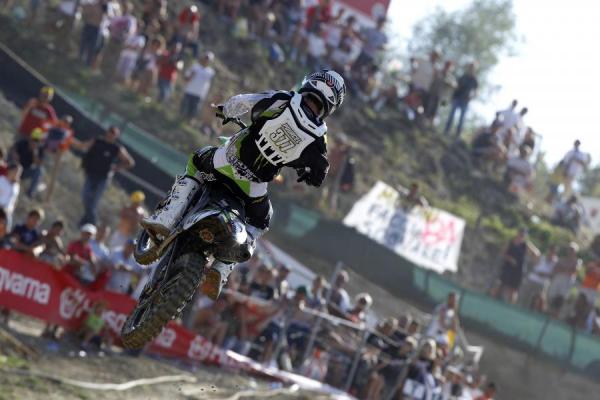 Italian Simone Zecchina permanently collected the number one plate he had been carrying for most of the season in the European 125cc two-stroke series and according to rumours the seventeen year old is set for a direct leap into the MX2 GP class for 2012.

The last major appointment for a generous smattering of Grand Prix stars awaits this week with the 65th Motocross of Nations at St Jean D’Angely in France. The home nation will find out on Monday if Steven Frossard will be able to make the trio (the factory Yamaha rider won the MX1 GP at St Jean), while Team USA will no doubt be squarely focussed on winning a seventh consecutive plaque on the Chamberlain trophy.