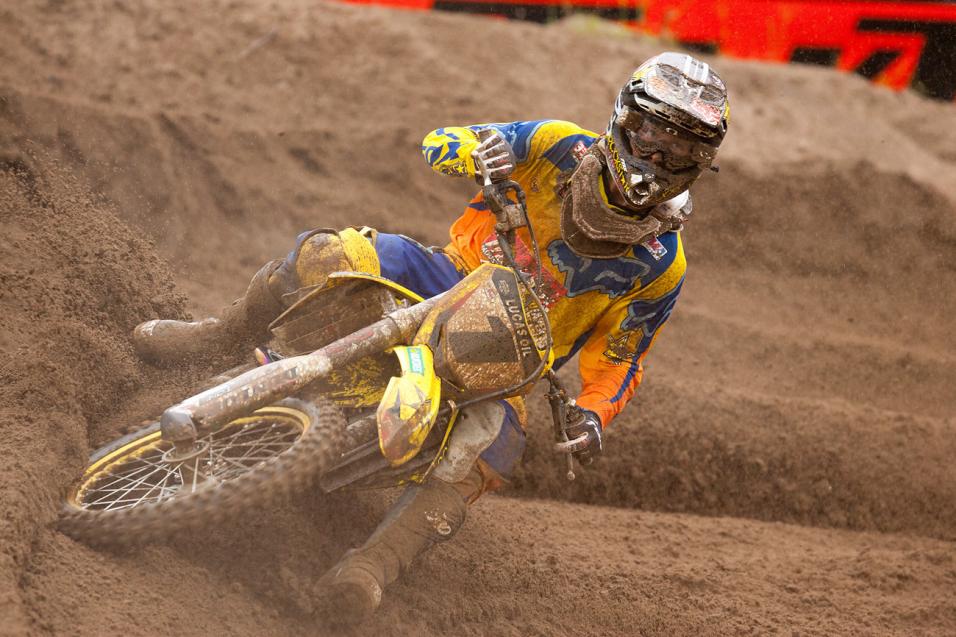 With just three rounds remaining in the series—Southwick, Steel City and Pala—Ryan Villopoto and Ryan Dungey came into Southwick separated by a mere seven points, with Chad Reed hanging on by a thread—twenty-five points back—and in dire need of an overall.

Dungey was looking to make a statement early as he grabbed the holeshot over teammate Brett Metcalfe, Mike Alessi, Villopoto, Justin Barcia, and Chad Reed. With championship pressure mounting Dungey remained calm, cool and collected in the face of adversity.

Villopoto would charge early, forcing his way around Alessi and Metcalfe, but could not make up any ground on Dugey as the Rockstar Makita Suzuki rider was looking to gain valuable championship points.

In the intro we mentioned that Chad Reed was hanging on by a thread, well that thread was cut down at Southwick. Reed was running in fifth place at the halfway mark when his bike seized up and prematurely ended his day, and more than likely his championship aspirations. Hondas bad luck wouldn’t end there as Justin Barcia also had bike problems and had to pull out while running third.

Villopoto would make a hard charge on the final lap to close within a second of Dungey, but Dungey would shut the door down the stretch to take home the moto one win. Villopoto would finish second with Metcalfe rounding out the podium.

-          Reigning Canadian MX1 champion Colton Facciotti made quite the impression at Southwick, taking home a fifth place finish in his first race of the season.

-          Local hero John Dowd looks to keep his number streak alive, and after a ninth place finish in moto one that streak looks to continue.