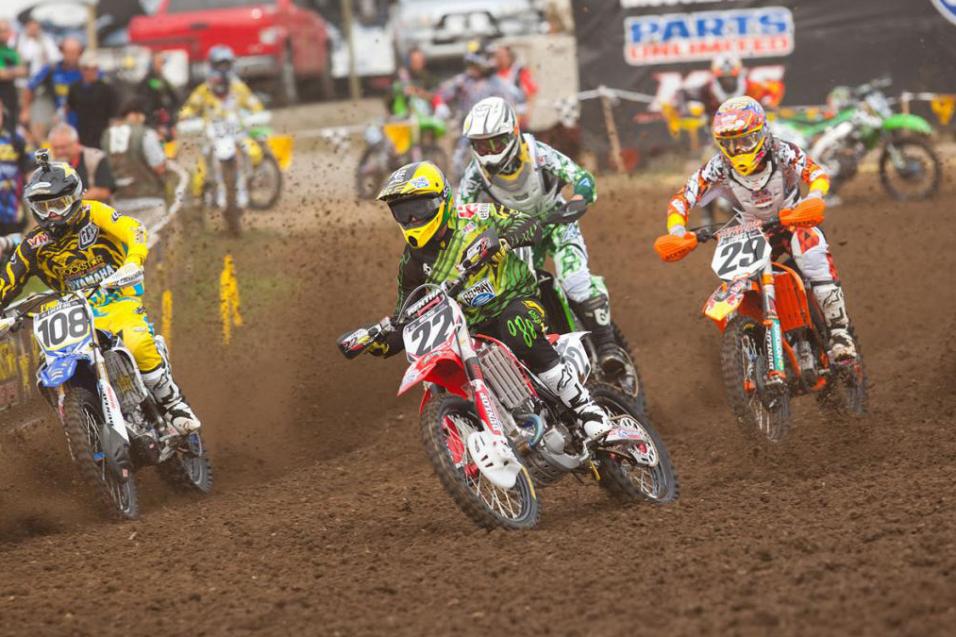 After a couple of weeks off, the 2011 Lucas Oil AMA Pro Motocross Championship picked up at the historic Unadilla, New York track. Unadilla is famous for hosting many international and national races over the years and is one of the oldest national tracks on the circuit.

The track was prepped perfectly, the weather here is a bit overcast with nice warm temperatures and we should have a great day of racing.

A few notes before we get into the practice report is that TLD Honda’s Christian Craig is back after missing a round due to a wrist injury, Suzuki’s got off-road and current GNCC points leader Josh Strang riding and JGR Yamaha has enlisted the help of Les Smith to ride the 450 class while it waits for injured rider Davi Millsaps to come back. The biggest news here is that local boy and 250F GEICO Honda rider Justin Barcia got the call up to the big leagues to ride for Factory Honda in the 450 class as Honda’s riders Trey Canard and Josh Grant are both hurt. Barcia, currently sixth in the points in the 250 class, makes the jump up and acquitted himself quite well with the third best practice time.

Also showing up for his second national of the year is former winner here John Dowd who just celebrated his 46th birthday earlier this week. Crashes held him back from making the field however.

Also announced were the three riders picked to go over to France and race for Team USA at the Motocross des Nations and they were, predictably, Ryan Villopoto, Ryan Dungey and Blake Baggett on the 250F.

Overall after practice, the times from the first practices generally held up as the faster ones so that meant that practice number 1 top qualifier, Monster Energy Kawasaki’s Ryan Villopoto held the top spot. Villopoto, who is also riding the new 2012 KX450F, was two-tenths quicker than the man he leads the series points standings by one point, team Rockstar/Makita Suzuki’s Ryan Dungey.

After that it was Barcia, then Red Bull KTM’s Mike Alessi and Team Two-Two’s Chad Reed who is looking to get back atop the standings after losing his season long lead at the last race in Washougal.

In the 250 class, after a lackluster first practice, Monster Energy Pro Circuit’s Dean Wilson rebounded with a strong second go-around and ended up with the best time. He will get the first gate pick this afternoon. His teammate Tyla Rattray was second and GEICO Honda’s Eli Tomac was third.

Looking forward to a great day here at Unadilla and things are looking promising for some great racing.