Wednesday marked day two of racing at the 2011 Red Bull AMA Amateur National Motocross Championship presented by AMSOIL. As the days go on, the racing becomes more intense and much, much hotter. The temperature reads ninety-three in Hurricane Mills, Tenn., although it feels like one hundred and fifteen with the heat index. The hydration tent was set up in the impound area to provide riders with the proper hydration tools to prevent post-race heat exhaustion.

Several past and current AMA champions were around the Loretta Lynn's pits on Wednesday, with appearances by Kawasaki's Dean Wilson and Ryan Villopoto, KTM's Mike Brown and Andrew Short, Fox Racing's Jeff Emig and Ricky Carmichael and Arenacross Champion Tyler Bowers, all on site signing autographs and hanging out with fans. During Intermission, Wilson and Villopoto returned to the track they once dominated as amateurs to introduce the 2012 Kawasaki's. KTM's Andrew Short and off-road racing star Mike Brown hit the track as well, introducing KTM's 2012 lineup of both 2-Stroke and 4-Stroke motorcycles. 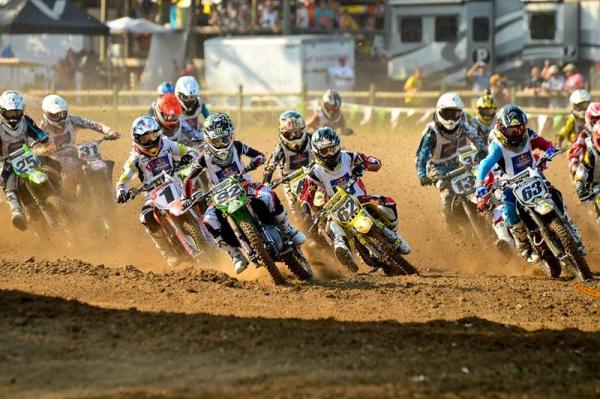 Normally, the after-hours activities are left up to the adults, but Wednesday night at Loretta Lynn's was all about the kids. Red Bull hosted an Under 21 Party at the Red Bull Energy Center to give the younger crowd a place to hang out and relax during arguably one of the longest weeks in amateur racing. Equipped with a DJ, all the free Red Bull you could imagine and a prime time dance floor, the Under 21 party was the place to be on Wednesday night.

The second day of racing began with moto one of the 450B Modified class, where XTreme Rockstar Suzuki's Justin Summers grabbed the win over Thousand Oaks Powersports' Austin Burns. Summers is sitting in a good position early in the game, going (1-10) so far in the 250B Stock, in addition to his moto one win in 450B Modified.

Posey Race Engines/Pro Circuit/Fox Racing's Kasie Creson has dominated the Women's class so far, taking both moto wins over Rockstar Suzuki Amateur Racing/Parts Unlimited rider Jennifer Burton. Burton has struggled post-race with the extreme heat conditions, but that hasn't affected her on-track riding as she sits with a (2-2) heading into the third moto on Friday. Fox/Oakley/FMF's Leah Cantrell currently sits in third overall with a consistent (4-3) across the board.

Triangle Cycles Yamaha's Kyle Peters got his first moto win in the 250A moto one after taking a hard hit in the first moto of Open Pro Sport on Tuesday. Peters had an early lead in the Open Pro Sport before going down on the first lap. Factory Connection Honda's Justin Bogle started inside the top five and just couldn't make up enough time to catch Peters in moto one. Storm Lake Honda's Gavin Faith holds down solid third place finishes in both 250A and 450A, as the schedule begins second motos today. 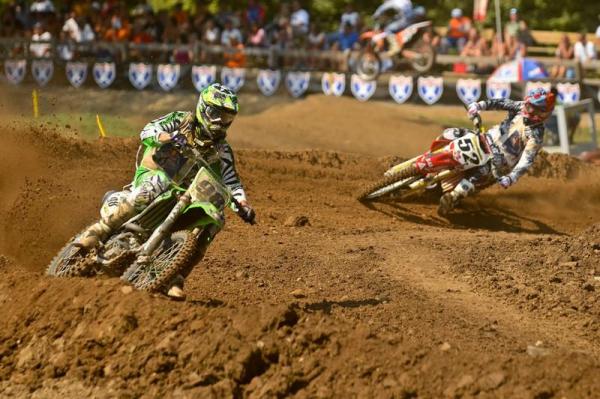 The Schoolboy 2 class houses some of the fastest riders on the amateur scene. Heavy hitter Cooper Webb took a hard hit early in moto one that left him unable to finish the race after his bike landed on his leg. After leading more than half the race, Monster Energy Team Green Kawasaki's Zach Bell took a fall that put him out of contention in moto one. Rock River Yamaha's Paul Coates capitalized on Bell's mistake, moving his way into first and going on to capture his first moto win at Loretta Lynn's. XTreme Rockstar Suzuki's Jace Owen came from a tenth place start amidst the madness of the Schoolboy 2 race, making his way up to second. Owen secured a podium finish in moto one as well as a top ten spot in the Schoolboy 1 moto 1.

Orange Brigade All American KTM's Mitchell Falk scored his first moto win of the week in 65 (10-11) Stock. Pirelli Mobil's Enzo Lopes threw down the fastest lap time in moto one with a 02:16.76 on lap seven. Lopes got off to a rough thirteenth place start and outrode the rest of the field to catch up to a second place finish in moto one. JM Racing's David Milana led the first five laps of moto one until he went down mid-moto, pushing him back to eighth. Milana showed his speed as he came back up a couple positions to finish sixth overall in moto one.

MTA/AXO/Enzo-backed Ryan Surratt has swept the 250C Modified class after the first two motos. After posting a 24th in moto one, BPM Racing Engines Six12 Sports rider Jared Jackson redeemed himself in moto two with a second place finish behind Surratt. The top ten of this 250C Modified class is very inconsistent, so third motos will be the breaking point for most riders on how their overall finish is going to end up. Carson Tickle has been Mr. Consistent, though, posting a (4-3) score to give him third overall going into the final moto on Friday.

Thursday continues the second moto schedule beginning at 7:30 a.m. and ending at 6:30 p.m. Special events will be taking place all throughout the day and through the weekend. Kawasaki celebrates 30 years of racing with a Craig Morgan concert Live in the AMSOIL Arena at 8 p.m. To follow Live Timing and Scoring from the event, click HERE.
Read Now
April 2021 Issue Now Available