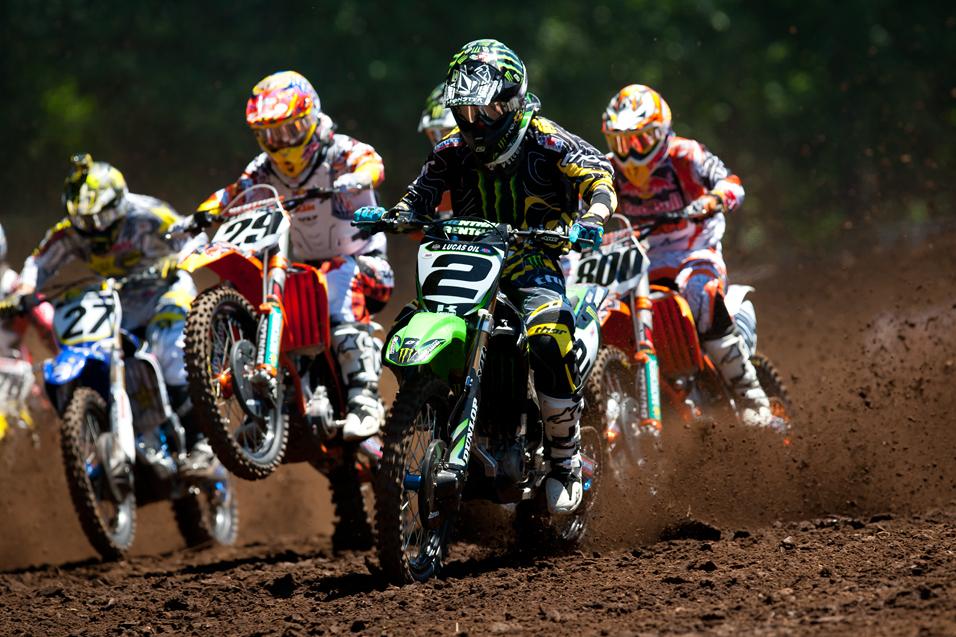 The already-tight points battles in the Lucas Oil AMA Pro Motocross Championship just tightened up again after four more superb motos in the 250 and 450 classes, this time at Washougal MX Park in Washington. The merging storylines resulted in a pair of winners on 450s, as Ryan Dungey romped home to the overall win for the second-straight week on his Rockstar Makita Suzuki, but Ryan Villopoto matched him on points for the day to take over the 450 series’ lead by the slimmest of margins. Chad Reed, leading the points coming into the race on his TwoTwo Motorsports Bel-Ray Racing Honda, struggled just a bit after his big crash last week and finished fourth overall via 7-4 scores, with Dungey’s teammate Brett Metcalfe taking third overall for his first podium of the year. 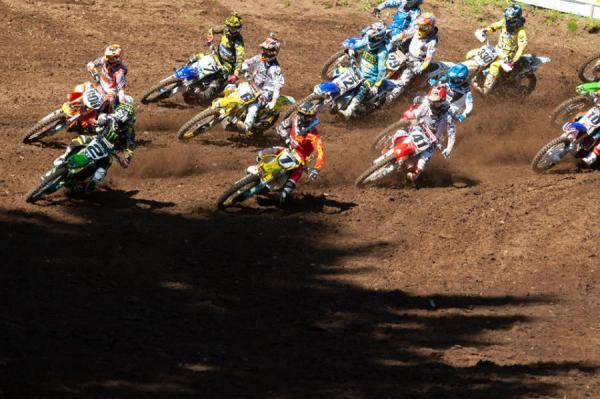 With Chad Reed ailing, the Washougal National turned into a battle between Ryan Villopoto (2) and Ryan Dungey (1).
Andrew Fredrickson photo

In 250s, no surprise, the Monster Energy Pro Circuit Kawasaki boys battled hard again. Blake Baggett ended up claiming the overall with 3-1 scores, which he didn't even realize until after the moto was over. Tyla Rattray was second via 2-2 scores and Dean Wilson overcame a bad start and a tough first moto to go 5-1 for third--yes, things are still really tight between the teammates, with Wilson still holding the points lead. As yes, as usual, a DNA Shred Stix Star Racing Yamaha took fourth overall, and once again it was Kyle Cunningham handling that piece of business.

Make no mistake, Dungey was the best of the 450 bunch on this day. He started side-by-side with Villopoto early in the first moto, but Villopoto controlled the good line in the second turn and took over the lead. RV2 then sprinted away, opening up a few seconds on Dungey, who had Trey Canard behind him on a Honda. Reed? He was buried deep in the pack after a so-so start and then getting held up in the second turn. He fought hard to come through, but it was clear that Reed was still feeling the effects of his crash and not up to his normal speed. He finished seventh. 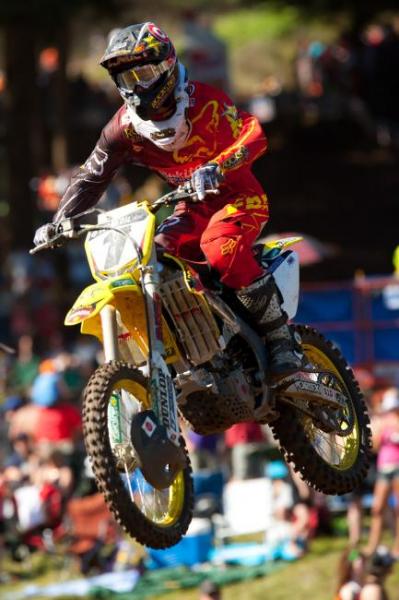 Two wins in a row for Dungey, and he's closed to within one point of the series' lead. 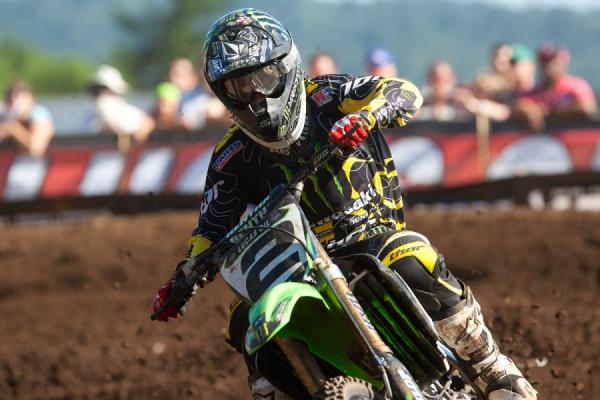 Although he rode well and won moto one, once again Villopoto was denied the overall victory at his home track. 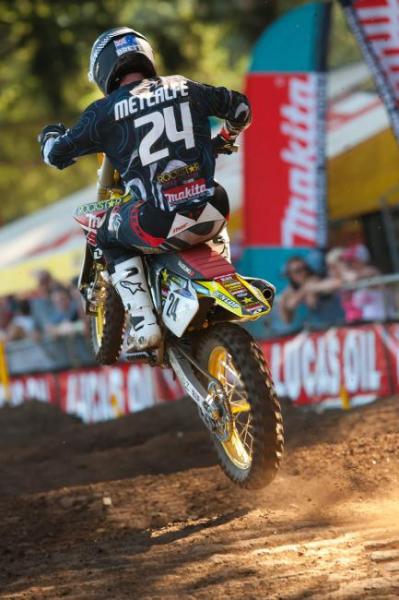 In a copy of the previous series' moto last week at Millville, Minnesota, Dungey started putting things together at the halfway mark of the first moto and closed back in on Villopoto. He attempted two passes, but Villopoto shut the door on him both times. Then he tried an outside line, but the berm gave way and he went down, dropping him off of Villopoto’s back fender. Villopoto took the win with Canard third and Metcalfe fourth.  In moto two, Villopoto grabbed the start over Dungey again in a near carbon-copy of the frist moto start. But Dungey picked a bad line and Red Bull KTM's Mike Alessi snuck into second, with Canard fourth and looking to get Dungey as well. Then Canard crashed violently when he tried to scrub at the base of Horsepower Hill early. In a bad spot on the track, this led to a red flag situation, and Canard was transported to a local hospital complaining of pain in the same leg he broke a few months ago. Later, he tweeted that he had rebroken the leg. Sad news there.

Dungey controlled the start the second time around, and Villopoto was all over him early. But Dungey began edging away, and pulled a gap that led to a moto win and the overall. Villopoto took second. Reed started third but admitted he didn’t quite have his normal push, and Metcalfe got by him to take third. Reed hung on with Muscle Milk Toyota’s Justin Brayton and Red Bull KTM’s Mike Alessi closing in right on him at the end, but settling for fifth and sixth. 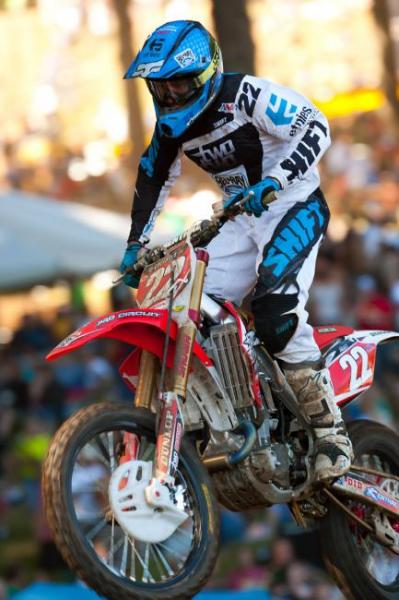 Chad Reed didn't have his usual edge after a big crash last week, and had to settle for 7-4 scores. He dropped to third in points, nine behind Villopoto.
Andrew Fredrickson photo 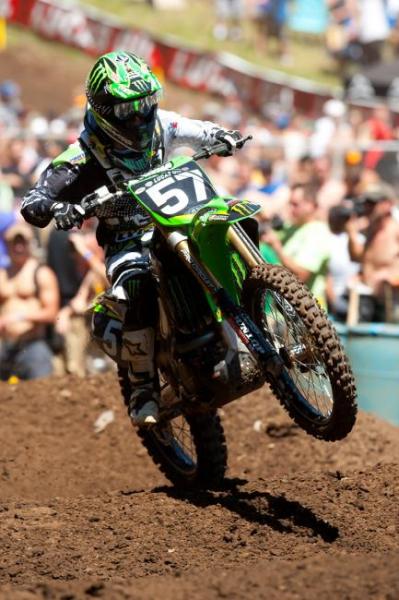 After a tough day last weekend, Baggett bounced back to win moto one at Washougal, and the overall with 3-1 scores.
Andrew Fredrickson photo

In the 250s, Baggett dominated the first moto after getting a good start and overcoming an early challenge from DNA Shred Stix Star Racing Yamaha’s Ryan Sipes to take the win. Sipes, who had the fastest lap time in practice, passed Baggett on the first lap, but Baggett got him back and pulled away. Sipes began to fade, eventually so badly that he decided to sit out of the second moto, saying he's going to have to get blood work done to figure out why he doesn't have the strength to finish motos.

Tyla Rattray climbed up to second and Sipes' teammate Kyle Cunningham took a solid third. Wilson, leading the points coming into the race, got a bad start and had a tough moto coming through, even falling over while trying to pass GEICO Honda’s Justin Barcia for fourth. He settled for fifth. Behind Wilson came the surprise of the race, as local product Tommy Week, who only has the money to race Washougal, hung with Wilson and Barcia for most of the race and ended up sixth, an impressive ride. 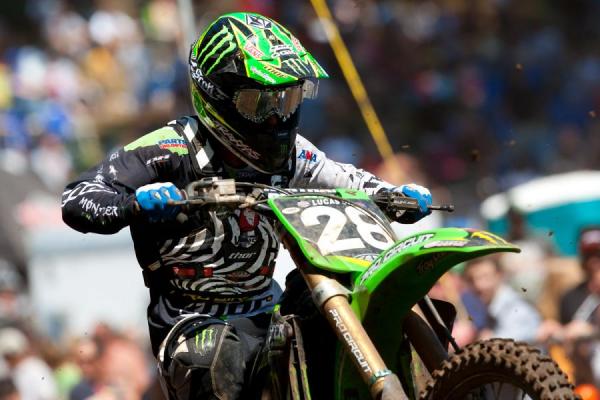 Tyla Rattray nearly pulled off another overall by closing down on Dean Wilson in the second moto, but he had to take second. 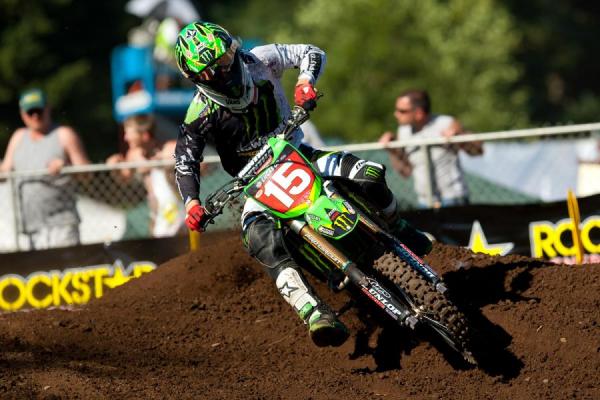 Wilson struggled in moto one but scored the win in the second race--he's still the points leader, too.
Andrew Fredrickson photos

Wilson then bounced back in a big way in moto two, snagging the early lead and riding strong. This time Baggett got the bad start and had to move forward to preserve the overall. He needed to get to third if Rattray finished second, and he had another DNA Shred Stix Star Racing Yamaha rider, Gareth Swanepoel, standing in his way in third. Baggett finally got him, giving him his 3-1, while Swanepoel hung on for a solid fourth. He finished fifth overall behind his teammate Cunningham.

Then Rattray took one more shot at it. He shadowed Wilson and stayed with him all the way to the end, found some good lines and closed to his teammates' fender on the last lap. It came down the last corner, with Rattray going for the pass but running out of room, and Wilson hanging on a for a bounce-back win. 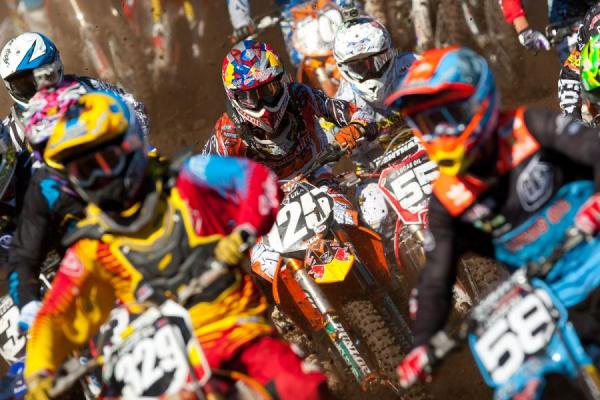 As always, great racing throughout the 250-class pack. Marvin Musquin (125) returned to action after a broken thumb and went 10-18 for 14th overall. Tommy Weeck (55) shocked many in his only race of the year, going 6-19 for 11th.
Andrew Fredrickson photo