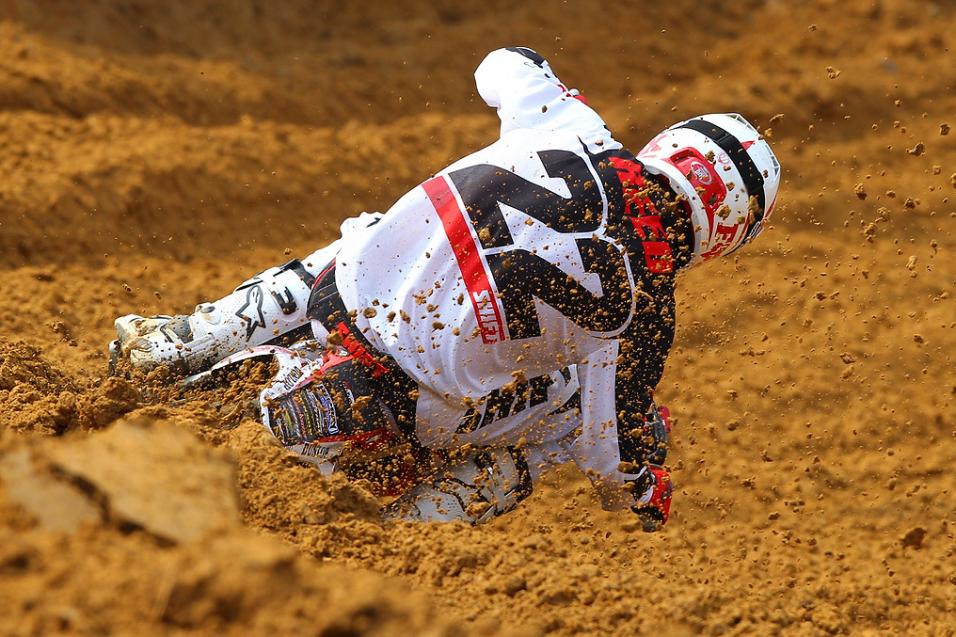 Round four of the 2011 Lucas Oil AMA Motocross Championships are underway here at Budds Creek, Maryland and so far, the conditions are pristine. Promoter Jonathon Beasley (who’s getting married here at intermission today!) had a prepped track that was deep and fairly rough after all the practice sessions were completed.

The track which can be run in either direction but today is counter-clockwise, proved to be a challenge to the riders and teams. Some rain is expected later today and depending on who you talk to, was going to hit at 3 or 5 tonight. We looked around and didn’t see Al Roker so who really knows.

The big news in the Honda camp was the return of Josh Grant. The #33 Honda rider was racing only his second race of the year for the team as he recovered from some various injuries. The talented Grant was ninth quickest this morning, not too bad for spending so much time on the couch. 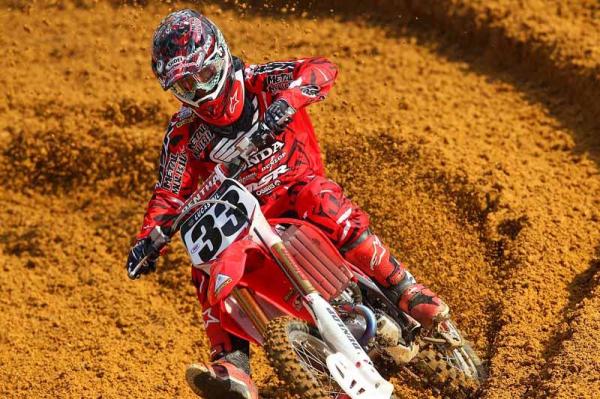 Josh Grant is back in action at Budds Creek.
Photo: Simon Cudby

With the start the way it is here at Budds Creek, qualifying times were very important as the gate pick that your time determines is weighted to the guys on the inside. The riders and teams know this and were determined to get that quick time.

Team Rockstar/Makita Suzuki’s Ryan Dungey’s first practice time held up as the fastest in the 450 class as he was almost a second and half faster than the rest of the field. Most of the fastest times were in the opening laps before the track developed some ruts and braking bumps.  Red Bull KTM's Mike Alessi followed Dungey and the effects of his crash last year obviously didn’t affect Muscle Milk/JGR’s Davi Millsaps as he ended up third.

Second session of the seeded guys saw Monster Kawasaki’s Ryan Villopoto go out there and in typical RV fashion, he was much quicker than the first session. His 2:04.3 led the way and was enough to place him second overall on the day behind Dungey. Dungey’s teammate Brett Metcalfe’s second practice time was also good enough to get him a fourth overall. Team Two-Two Motorsports’ Chad Reed rounded out the top five with his second session time counting. 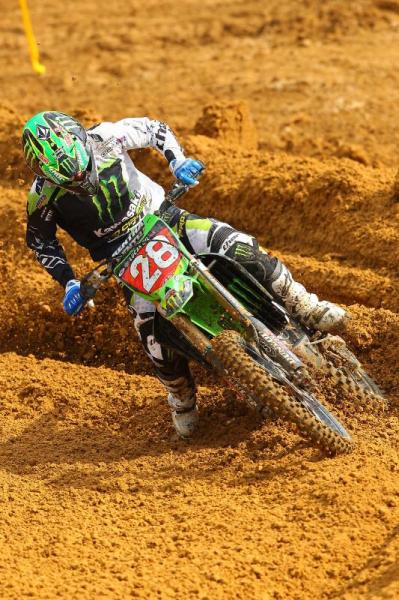 Rattray and his new red plate were fourth overall in practice.
Photo:Simon Cudby

In the 250 class, it was Monster Energy Pro Circuit’s Blake Baggett who topped the overall qualifying with his second session time of 2:05.4. Baggett, the winner of the two of the nationals this year, certainly seemed to attack the track from the opening laps of the second session and his injury here last year also seemed to not bother the BB Gun. GEICO Honda’s Justin Barcia who was revealed this week to be suffering from mononucleosis, had the second best time of the day in the first session and it appears that Barcia rested for the second session. Star Racing Yamaha’s Kyle Cunningham was third with Bagget’s teammate and series points leader Tyla Rattray in fourth.

If the rain holds off, the racing here at Budds Creek should be epic and the heat and humidity will surly test the riders.