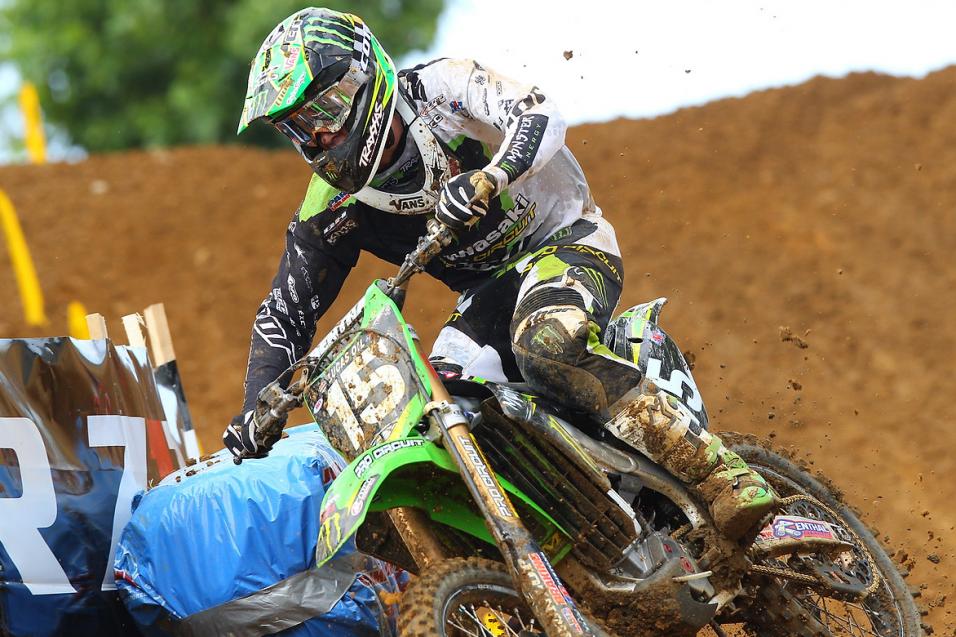 It was absolute chaos right off the rip in the 250 class. Once again the Pro Circuit powerhouse set the tone early with Dean Wilson grabbing the holeshot followed by Kyle Cunningham, Tyla Rattray, Darryn Durham, Gareth Swanepoel and a host of others.

Early on it was the fourth member of the Pro Circuit stable making a hard charge as Broc Tickle made an early push to the front of the pack. Tickle settled in behind the lead of Wilson and Rattray as the Pro Circuit domination of the outdoors continued.

Behind the leaders Cunningham, a resurgent Darryn Durham, Eli Tomac and Nico Izzi began fighting over top-five positions. Durham and Tomac engaged in a heated battle for fifth, before Durham was able to make a pass stick and then managed to get around Cunningham for fourth.

Wilson began to stretch his lead early, meanwhile last week’s overall winner Blake Baggett was buried mid-pack after a slow start. Rattray and Tickle began to settle in behind Wilson, with Durham, Cunningham and Tomac rounding out the top-five mid-way through the race.

Baggett began to make another hard charge at the half-way mark but was derailed by a mistake causing him to stall his bike. While he was able to get the bike started quickly, the damage had been done.

Disaster struck late in the race for Darryn Durham, as he took a nasty soil sample and was unable to get his bike restarted, ending his incredible ride in moto one.

Dean Wilson lead from start to finish taking the moto one victory with his Pro Circuit mates—Rattray and Tickle—rounding out the podium. Kyle Cunningham would take fourth, with Eli Tomac taking home fifth. Justin Barcia battled through mono and a bum wrist taking sixth with Blake Baggett, Nico Izzi Gareth Swanepoel and Martin Davalos rounding out the top 10.