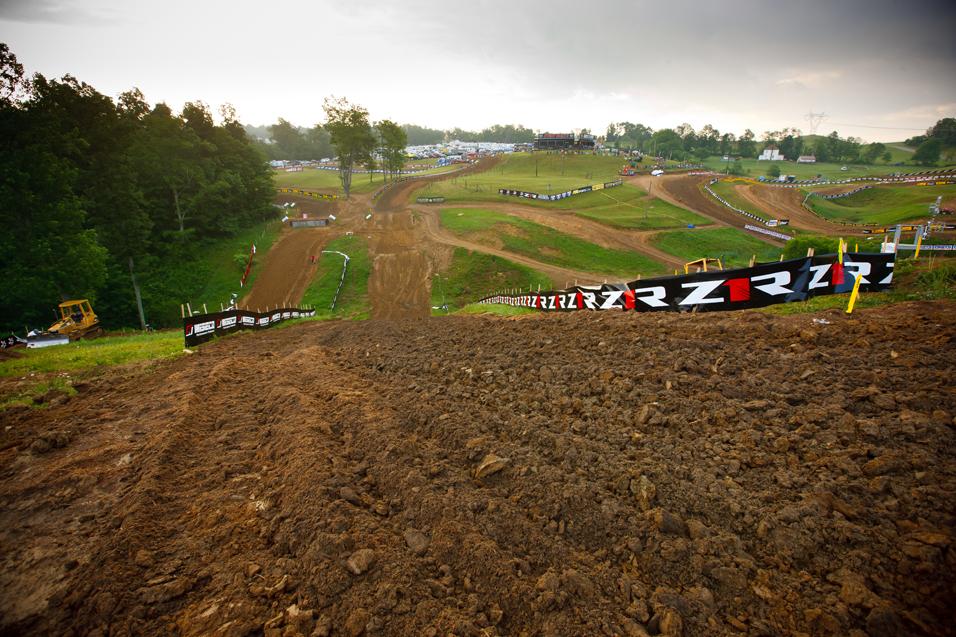 In Preparation: Outside the Box

The opening scene featured the arrival of the Ryan Villopoto many had expected to see from the opening round on -- with the preseason favorite laying waste to the field on a well-prepped (albeit drying and slick) track to take his first moto win of the season.

The second act was series leader Chad Reed asserting again his determination to win another outdoor championship -- tenaciously coming back in the second outing to control a race run in near-uncontrollable conditions.

Under semi-overcast skies Villopoto led the first moto with authority from green flag to checkered flag, chasing fast-starter Ryan Dungey into the first corner and coming out with the lead in the third turn. From there until the closing laps 'Poto stretched the throttle cable and stretched his lead. Villopoto rolled it off in the final lap and allowed a still-charging Dungey to close to within nine seconds at the finish, but RV was 50-plus seconds clear of the battle for third between Mike Alessi and Davi Millsaps with Reed over a minute back in fifth. 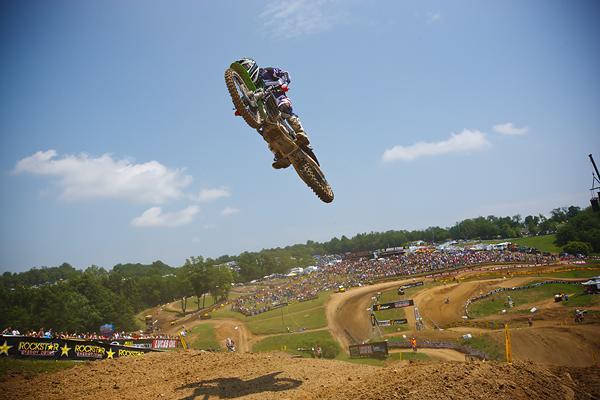 Villopoto soared to the win in moto one.
Photo: Simon Cudby

During the first race, it looked as though Reed might be battling traction issues as the lightly-watered track dried to dusty. Involved in a prolonged battle for fifth while sandwiched between a fleeing Jake Weimer and a chasing Millsaps, Reed made up time in the braking bumps entering slick corners only to lose it right back with wheelspin at the exit.

But it was someone else's tire that had caused the major problem. After the fact, it became known that Reedy was also struggling with a shoulder laid open to the collarbone by shrapnel in the form of roost from Weimer's rear wheel. The gregarious of late Chad Reed was nowhere to be seen between motos. Except for a quick visit to the Asterisk medical facility, he was holed up in the Team 22 transporter with ice on his shoulder. And perhaps ice in his veins.

As heavy rains pummeled the track and staging area minutes before the second race, Reed stood aside during a track-side tire change. When the gate fell for a sloppy and unpredictable moto where anything could have happened -- most of it bad -- Chad slid around the slippery first turn in fourth behind Alessi's holeshot. Half-a-lap in, he was in second. Half the race in, he took over first. Alessi had been on a flyer, posting the fastest laps of the race before sliding down. Passing the crashed and re-mounting 800, Reed set his own fastest times in the latter stages to secure the win. 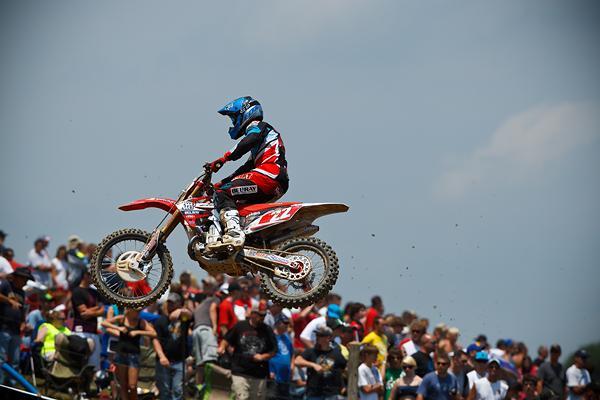 Reed would finish fifth in moto one, but would rebound to take the win in moto two.
Photo: Simon Cudby

'Poto dominated the first race, and Chad controlled the second. The curtain call was a clearly satisfied Villopoto on top of the box with the overall victory -- with a resilient Reed also on the podium and still holding a double-digit points lead.

Behind the battle for the top of the box comes a cast of characters with clear aspirations of playing something more than a supporting role.

THE OTHER RYAN -- YOU KNOW, THE DEFENDING CHAMP...

In his first full season of professional racing, just four years ago, the eventual 2010 outdoor champion Ryan Dungey once stated that he wanted to race for wins -- that he'd almost rather quit than be battling for seconds and thirds.

In a starry first campaign in the premier class, Dungey won 19 motos and 10 overalls on his way to clinching the championship. His 450 sophomore season is more star-crossed.

Three races into his title defense, Dungey has led 28 of 94 laps of racing but nonetheless had to settle for a pair of second place overalls... and an eighth at round two. Two out of three for podium appearances, and yet to make it to the top step at the end of the day. One moto victory, with an overall win proving elusive thus far. 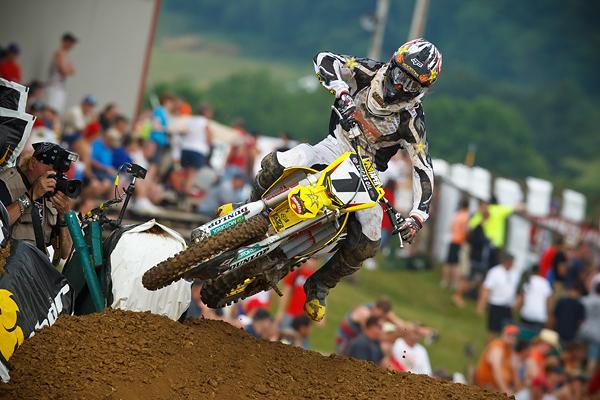 Ryan won the very first moto of the 2011 season, leading the last 10 of 16 laps. He'd lead just two laps of the second moto -- shortly after taking the lead from Ryan Villopoto, he succumbed to Chad Reed's push to the overall win.

The tables seemed to be turned when the series rolled into Texas. Dungey led two of 16 laps in the day's opening race, eventually finishing behind Reed. In the second moto, Ryan convincingly led for the first 14 laps before it all went awry. Reportedly the victim of boiled fuel, Ryan went from having the overall in the bag to pushing his bike back to the pits with no points.

At last weekend's third stop on the outdoor tour, Dungey ran up front throughout the day but never quite got a whiff of the actual lead. After leading 12 laps of racing in the first week and 16 the next, Ryan was shut out at round three. What's worse for RD's title defense, Dungey made up only a single point in the championship even though passing Davi Millsaps for third in the overall standings. Ryan came into the Mt. Morris weekend with a 28-point deficit, and left still 27 points back.

Dungey won his 2010 title with consistency... in the form of consistently winning. In the 2011 championship chase, anything less might not be enough.

Far from dropping anchor, Davi Millsaps has been full speed ahead in the opening rounds of the outdoor series.

In both High Point motos, Millsaps put heavy pressure on the points leader through much of the race. In the first outing the 18 actually ran down and passed Reed. In the opening laps of the second moto Millsaps also pressured Reedy -- and though he came up short, his performance in the sloppy conditions might have been even more impressive. 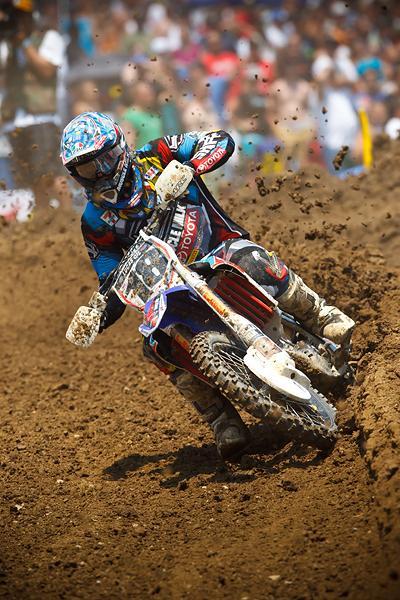 Early on, Millsaps used his formidable mud-riding skills -- he was the only rider daring the big fade-away double in the middle of the track, as sketchy as it was slippery -- to close up on the 22 bike in a battle for the second position. Davi's reward wasn't the position, but a mud-bath. Reed absolutely ruined Millsaps in the right-hand bend that led out of the back section of the track.
After being showered with muck, Millsaps jumped down a drop-away pulling three tear-offs in about two seconds -- then ripping away the rest as be bounced up the hill before the finish line. Shortly thereafter, he chucked his goggles altogether.

Still, he continued to push on -- despite running a strong fifth place, it was apparent that Millsaps still wasn't satisfied. He continued to move forward until sliding down with just three laps remaining.

Is it the impending pressure of contract renewal (or not)? Is it a recent change in diet necessitated by his kidney problem that's made the difference? Well... either way, no one is holding up Millsaps as a paragon of intestinal fortitude. Still, the constant criticism Davi endures might be more than a little misguided.

Millsaps is kind of like Kevin Windham, in that both are tall riders with flowing and almost effortless styles -- and being tall and riding smooth are mutually intertwined. Centralization of mass isn't just marketing hyperbola, it's a reality. Riders at or over the 6-foot mark can't really crawl all over the motorcycle like an adrenaline crazed monkey.

If it maybe looks a little slower to be smoother, the distinction is less blurry on recent results sheets: Millsaps has went 4-7-4-2-3-9 in the first six motos of the year, and that's with a few falls mixed in. Results of that caliber don't happen from just trying harder. They come from just being faster... faster than the critics, and faster than almost anyone else on the planet.

Whether Millsaps is healthier physically, or more focused mentally, or both, he has his head down riding hard -- and can be considered a threat not just for the podium, but for the win.

Both Villopoto and Reed have enjoyed considerable success at the next stop on the tour, Budds Creek.

Reed clinched his 2009 outdoor title at the track with the overall victory. And even in a season he'd rather forget -- last season, that is -- Reed posted a 4-2 score to put it on the podium. In fact, in his entire career Reedy has only finished off the box one time in Maryland. In his first visit there in the big bike class, 2003, he finished fourth overall. In 2004, 2005, and 2006 CR finished second to RC. And in 2007, Reed finished third behind Ricky Carmichael and James Stewart. 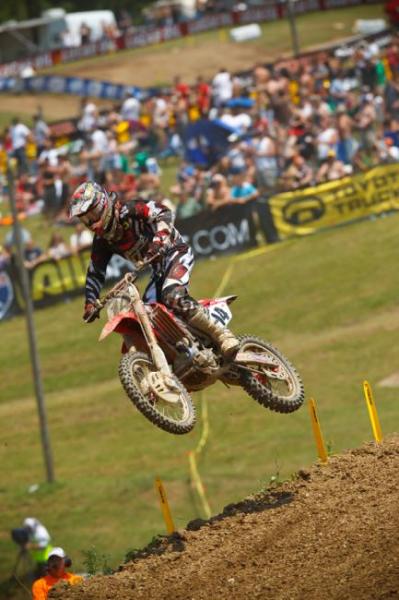 Will Budds Creek be the site of Windham's last stand?
Photo: Simon Cudby

Villopoto's first attempt at a Maryland win on a big bike awaits this coming weekend. RV has never been to Budds Creek in the 450 class -- but he's never lost a moto there either. Villopoto swept all six motos of the three 250 nationals he won there. And his two race wins aboard a 250 at the 2007 des Nations is of course the stuff of legend. He may not have rode a 450 at Budds before, but he did beat a hell of a lot of them.

The venue, obviously, hasn't been as kind to Millsaps. It has taken nearly a year for Davi to recover from his crash at Budds last time. In 2006, he finished third in the first moto but crashed hard in the second while running in the same number three position. These are not good Millsaps memories. On the other hand, going back two years, he finished runner-up to Reed's championship clinching win.

One fourth of the way into the outdoor show, we've witnessed Reed winning 66 percent of the motos and have watched the rival Ryans of Dungey and Villopoto split the rest.

Still waiting in the wings, stage right, injured reserve, are Trey Carnard and Josh Grant of factory Honda. Which means that at Budds Creek, we may also see the final curtain fall on Kevin Windham's outdoor career.

Kevin, we want at least a few more encores.