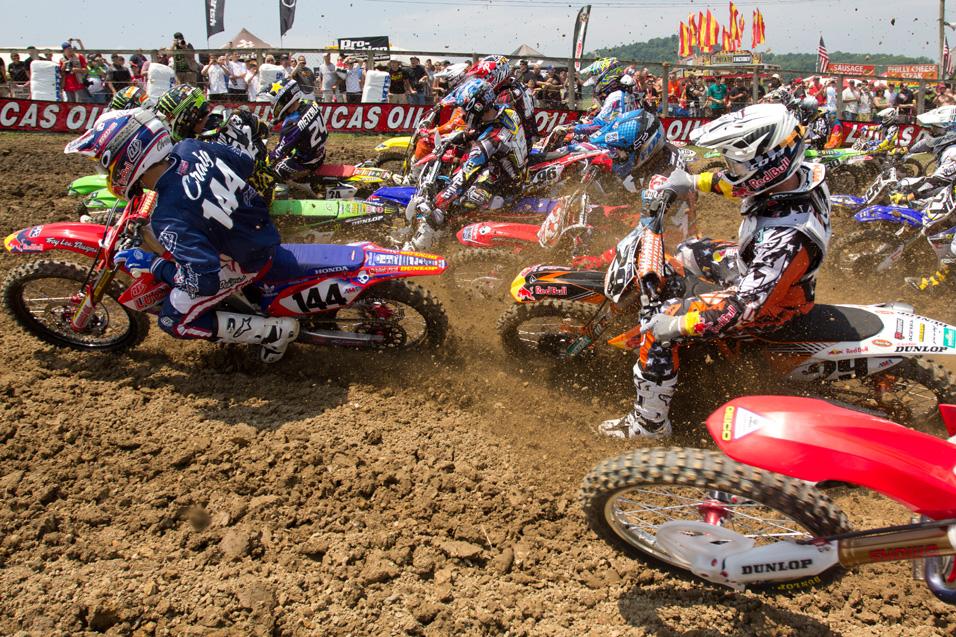 June 11, 2011 4:30pm
by: Chase Stallo
High Point Raceway Mt. Morris, PA High Point Raceway Lucas Oil AMA Pro Motocross Championship
Just when it seemed like we were going to escape High Point without a drop of rain, Mother Nature was kind enough to blast the track for the better part of fifteen minutes before finally letting up. This made it quite difficult on the 450 guys as they had to deal with muddy track conditions early.

Mike Alessi was up to his old tricks again, grabbing the holeshot, followed closely by Ryan Dungey, Chad Reed, Davi Millsaps and Ryan Villopoto. Dungey would take a soil sample early and drop back to seventh, giving Alessi some breathing room.

Alessi would open up a huge early lead as Millsaps and Reed fought over second. It looked as if Alessi was going to walk away with the race, but he would crash mid-way through the moto giving up the lead to Chad Reed.

Alessi would drop two more spots late in the moto before taking a fourth-place finish. Dungey would make a late charge but could only make his way up to third. Villopoto took second and his first overall of the season followed by mud specialist Kevin Windham in fifth.

This marked Chad Reed’s fourth moto win in six tries. Reed is beginning to look like the Chad Reed of 2009, and that could be a scary thought for the rest of the field.