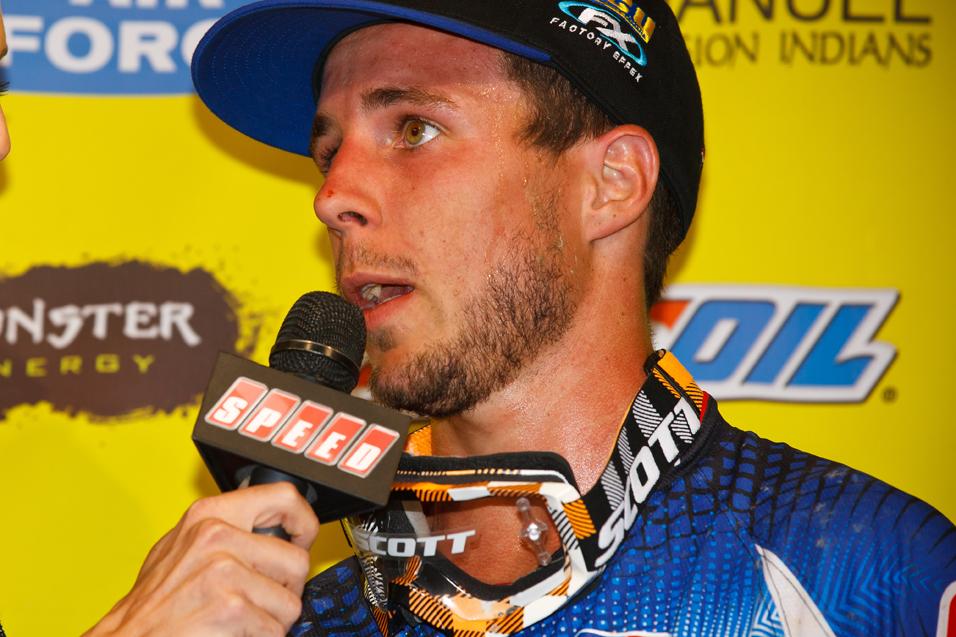 Kyle Cunningham, 3rd in Lites West Main, 7th in Shootout
It went pretty good, I had good lap times today, but bad starts. Lately my starts have been pretty good. I had to work for it in the main, and that really counted for me. I rode a solid race, got up to second and made a mistake the last lap and Broc (Tickle) got by me. He rode a good race and so did Roczen. I guess I kind of came from nowhere, so I’m pretty happy with a third.

Going into the shootout, it was kind of bumpy and I got another bad start and had to work my way up to sixth I think with three laps to go. I made a little mistake and went down and ended up eighth. Not really the way I wanted to finish in the shootout, but like I said, I had a little mistake. We made progress tonight with the podium, and I have to give it up to the DNA Shred Stix Star Racing guys. My mechanic Andy works really hard for me during the week. I’m super excited going into the outdoors. We’ve got the bike ready, and my fitness is there; it’s longer motos, the man side of it. 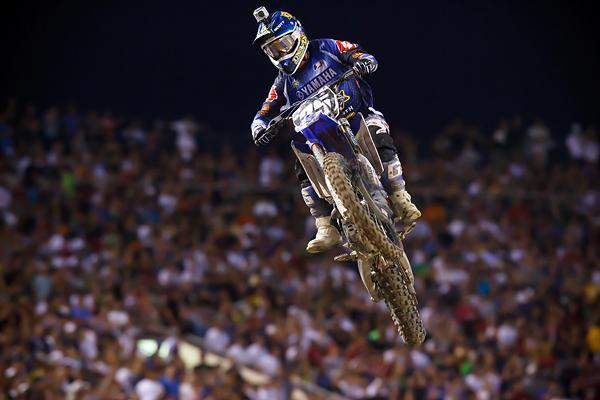 Cunningham had his best finish of the season at Vegas.
Photo: Simon Cudby

Tonight was important to get the start, but somehow I managed to get to third in the main so it was a good night for me. It was an experience. I had some bad races, otherwise I would have been up in the points a little further where I wanted to be. But I had a good year. You know, being between those guys when they’re going after the title, you’re just trying to get around them, not ride dirty, and just ride your own race. I think I did that pretty well tonight. We’re excited about the third, and we’re looking forward to the outdoors. It’s the start of a new series, and hopefully we’ll get out there and get some red backgrounds and hopefully win the championship.

Eli Tomac, 4th in Lites West Main, 6th in Shootout
My last practice was good, my first two I didn’t feel awesome. In the main I had the holeshot going down the straight, but I came in a little hot and Roczen somehow got by me, Seely squared it up, and I kind of got shuffled down the Vegas strip. I had to go through all the Kawi guys I think. They were the easiest, actually, the cleanest. Once I got to Cunningham and Seely,

I kind of got a little balled up there and then I got by Cunningham and was actually getting by Seely, but.. Yeah, he didn’t show me much love. I guess it’s a single man’s sport.

Did the Honda teams have any type of orders or agreements going into the race?
No. I know Honda’s not very happy about it, but it’s just the way it is.

How did the track hold up?
It was classic Vegas. The worst thing was the whoops, really. They started getting a little dodgy, in the shootout especially. It was just all hard pack.

Travis Baker, 8th in Lites West Main, 9th in Shootout
It went good. I qualified I think eighth for the west coast, went out for the west coast main, and got a decent start. I got passed at first, made some passes back, and ended up eighth. In the shootout I got another decent start, passed a few guys, and ended up getting ninth. Not a bad weekend. I’m pumped, ready to get this season done and get to the outdoors.

How was the track?
The track actually was pretty good. Slippery like always for Vegas, you know it’s going to be kind of crappy. But it was fun, it’s a dirt bike track, it’s fun just to go out there and ride a dirt bike. 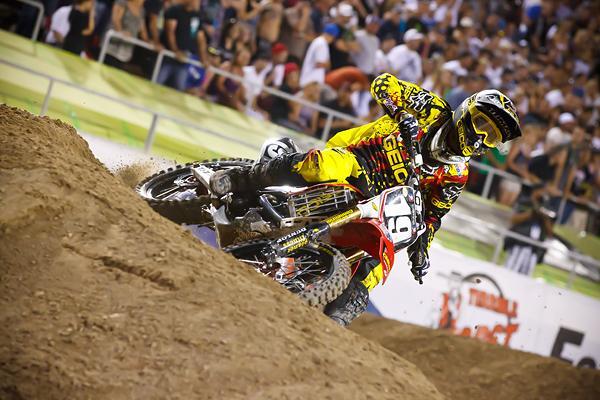 Tomac didn't win the championship, but he had an amazing rookie season nonetheless.
Photo: Simon Cudby

Chris Blose-Hart & Huntington Kawasaki- 4th place, 450 class
I went down in the heat race and had to race the LCQ. I just put my head down out there in the main, some people crashed out and I ended up with fourth place.  The track was tough, the whoops were dry slick and hard pack. Definitely the hardest part of the track and I almost went down a few times.

Do you feel more pressure with your teammate Ivan Tedesco out?
Not really, it sucks that he got hurt. I just come out here and do my job, do the best I can do and that’s it. The season has been good, at the beginning it was rough but we made some changes to the bike as we went and it got better.

Nick Wey -Valli Yamaha – 8th place, 450 class
I made a mistake and Jake (Weimer) got me which wasn’t cool, I felt like I was riding good because I caught up to that pack with Short in it and he was riding well but I thought that he was holding me up a little bit. Then I made a big mistake and Weimer caught me and I made another one and he got me.  I was pretty solid for sure but I’m bummed because I’m on the cusp of getting a top five, I’m right on the edge to getting up there but haven’t got the starts that I needed. I’m stoked on my Valli Motorsports Yamaha, MSR, TRS, Foremost Insurance, Mandingo Pickles, Rockstar Recovery drink ride- love those. 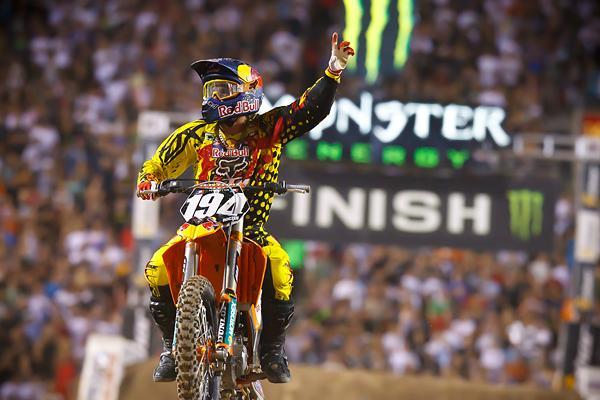 It’s unbelievable that I won man.

I holeshot the main and went down, I didn’t think I had enough time to catch (Cole) Seely but then he went down. I was able to win and it’s an amazing feeling, my first main event.  In the shootout, I got a crappy start, had a mistake and was sixth. I improved in the whoops as I went on and got on the box. The track was hard because of the whoops and it wasn’t easy to ride out there.