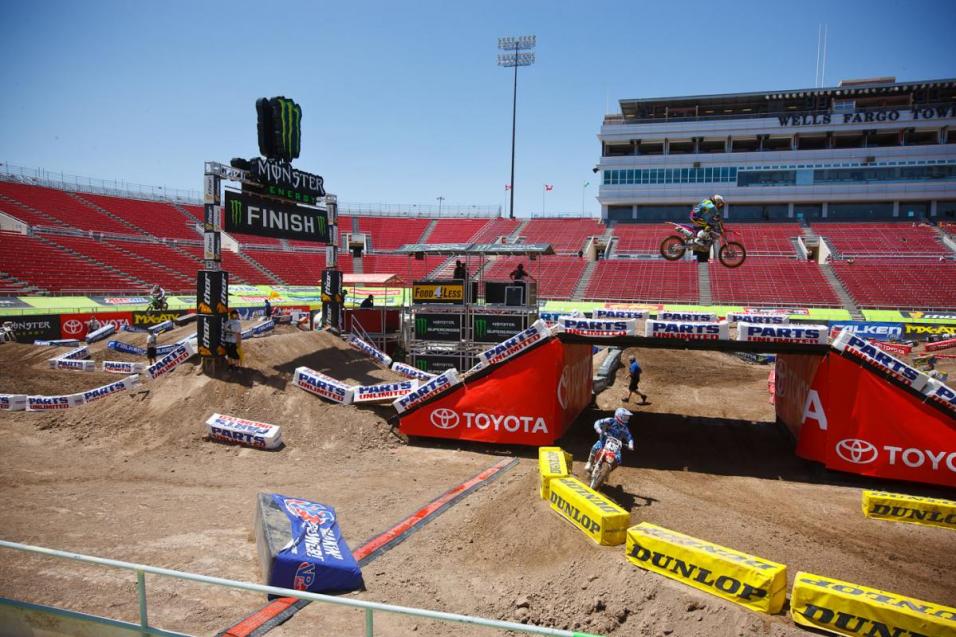 Welcome to your morning report from Vegas--and yes, this is probably the first time anyone has ever reported on something happening in Vegas in the morning.

We've got a fun and challenging track here in Vegas--as long as you think that a challenging track is fun. The big floor at Sam Boyd Stadium allows for lots of long straightaways, leading to big rhythm lanes, a long whoop section, and even the classic over-under bridge. Throw in the massive Monster Alley, with its long sweeper outside the stadium, and you've got the fastest, longest track of the year outside of Daytona.

The whoops are super deep here, and as always in Vegas, they're hard packed and slick across the top, so the chance of wheelspin is pretty easy. Some of the jump combinations are pretty big, but timed practice hasn't begun, so we haven't seen the best combinations put together yet.

In the riders' meeting, FIM Race Director John Gallagher said they will be watching the race closely for obvious dirty riding and team tactics. Championships are on the line here, but Gallagher said he will not be afraid to black flag a rider and end his race if he sees something out of line. We doubt you will see an actual black flag unless things get really crazy, but at least Gallagher and his team have warned the riders up front in case something big goes down.

Last night, a coin flip was held to determine which Lites coast will race first. The East won the coin flip so they will race their main event first, then the West will line up. Remember, there are no Lites heat races tonight, as what are usually heat races have become 15-lap main events, each paying points and serving as the final round of the 2011 Lites Championships.

After that we'll see the SX Class heats, then the Lites LCQ (the double Lites main events also serve as qualifiers for the Dave Coombs East/West Shootout, with the top nine riders in each going to the main, and then the LCQ filling out the final two spots). Then we've got a SX LCQ, the Lites East/West Shootout (10 laps) and the SX Main. The whole show is scheduled to be about 40 minutes longer than a typical night of Monster Energy Supercross, due to the 15 lap lites mains instead of six-lap heats, and the longer lap times. Enjoy all the racing!