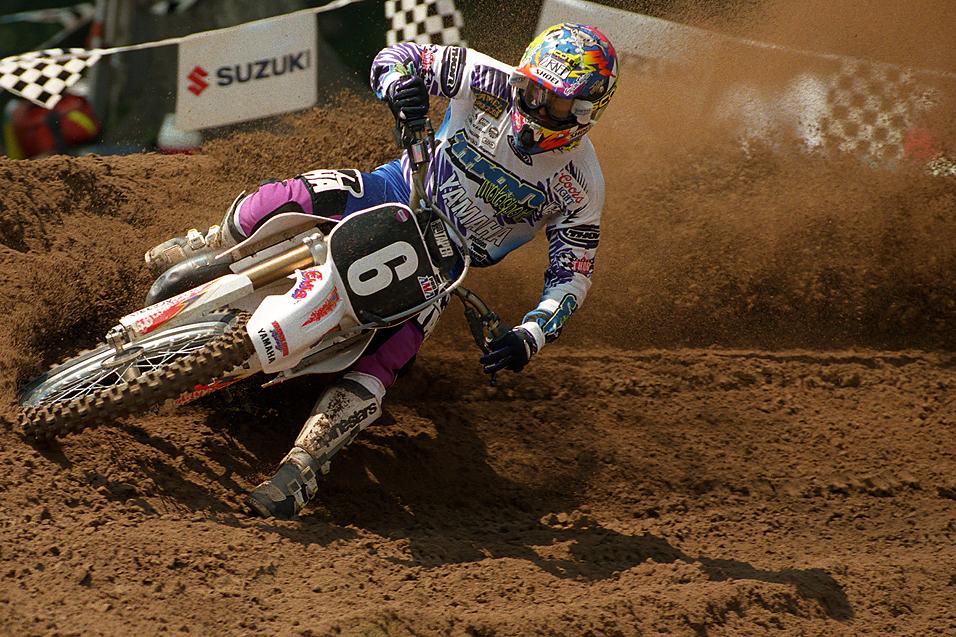 May 4, 2011 4:30pm
by: Jason Weigandt
The 40-Day Countdown to the 40th Annual Lucas Oil AMA Pro Motocross Championship rolls on. Today, 1994 is on the docket, with Racer X Online ready to recount history. If you want more info on this summer’s 2011 tour, visit the official series’ site at www.allisports.com or “Like” the new series Facebook page.

Change had come to AMA Motocross by 1994. The old 500 National class was gone, and now the 250s and 125s would run the full twelve-round distance together. The series also garnered better television coverage with a full package on ESPN and ESPN2—matching the now-long-running supercross TV package (although both were often shown days later, and bounced around for other sports). The series was building momentum, but its new stars were still in the making—including Jeremy McGrath, who proved that '93 was no fluke by absolutely dominating the 1994 AMA Supercross Championship. 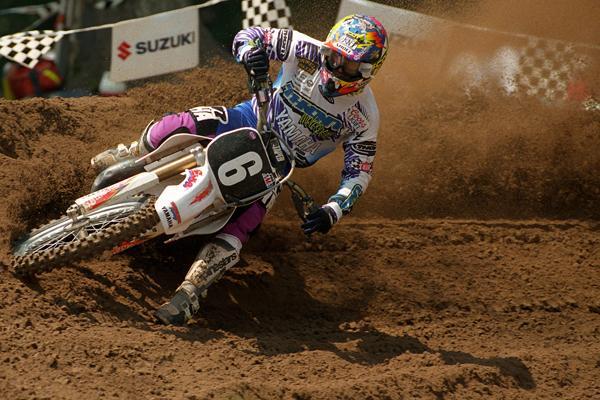 Jeff Emig lays into a Southwick berm in his quest for a second 125cc title.
Photo: Paul Buckley (Buckleyphotos.com)

Outdoors, though, the 250 class was an all-Kawasaki show, with teammates Mike Kiedrowski and Mike LaRocco going at it for the title—and we mean going at it! They traded moto wins week after week, and by the midway point of the season the tension was rising within the Kawasaki semi. At Red Bud, Kiedrowski led the first moto until the last lap, when LaRocco put an aggressive pass on him, knocked him down, and stole the win. The normally calm and cool Kiedrowski lost it and ghost-rode his bike into LaRocco after the finish! In the second moto, LaRocco led most of the way before tipping over, and Kiedrowski scored the win.

The team settled the Mikes down and they promised to play clean for the rest of the year. But they never got a chance to, because at the next round at Unadilla, Kiedrowski got hit in the hand by a rock in practice and broke a bunch of knuckles. He was out and LaRocco won the championship in a romp. He would never get to wear his #1 plate from the previous year's 500cc title, but this one would look good in 1995. 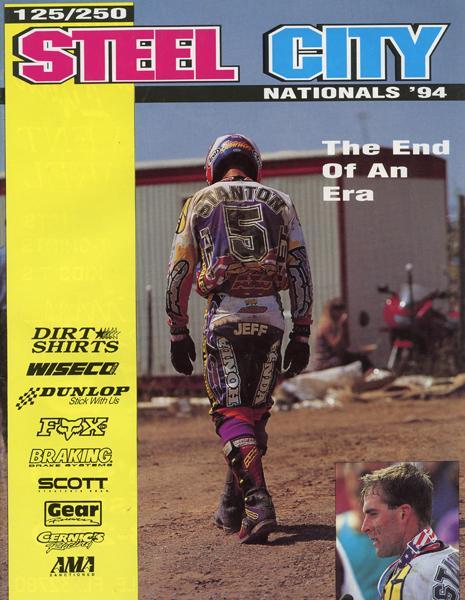 Jeff Stanton's Hall of Fame career ended in 1994 at the Steel City National.

Some cool story lines were taking place behind him. When Damon Bradshaw retired at the end of the 1993 season, Yamaha snapped up Mike Craig to replace him. For a few months, Craig was on the gas and even won the Tampa Supercross, but then he missed the outdoor-season-opening Gatorback National after supposedly tripping over his gear bag in his hotel room the night before the race and injuring his knee. By summer, Craig was struggling big-time and not even finishing motos. In a rare move, Yamaha sent “Sting Ray” packing and boosted support rider John Dowd from a Team Penske/Boyesen Engineering support ride up to the factory bike. The 28-year-old Dowd responded by winning at Millville and Broome-Tioga!

Also, Jeremy McGrath moved up to the 250 class full-time for 1994 but was still not close to the same rider outdoors that he was in supercross. He failed to win an overall and finished third in the 250 series behind LaRocco and Dowd.

And '94 marked the last season of racing for Jeff Stanton, the six-time champion in AMA Motocross and AMA Supercross. Stanton crashed hard at the Hangtown National and shook himself up enough to reconsider his future. Then, at his home race two months later—the RedBud Classic—Stanton shocked the crowd and the entire sport by announcing his retirement at the end of the season. He walked away tall and proud, straight into the AMA Hall of Fame. 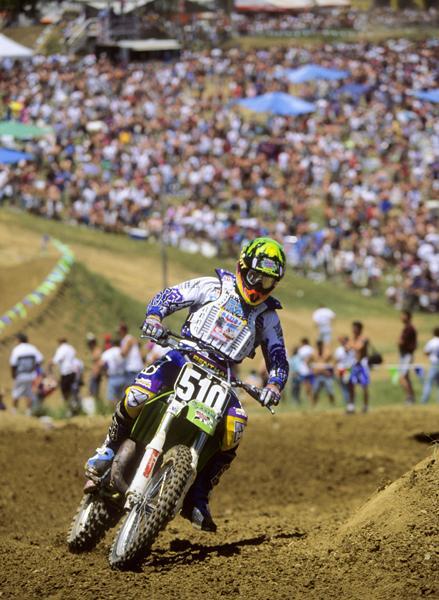 LaRocco, Kiedrowski, and Dowd were all tough, hardworking guys, but they weren’t very flashy. The real sizzle came in the 125 class. The pack was stacked with talent, with new kids like Damon Huffman, Ezra Lusk, Robbie Reynard, and Ryan Hughes dueling with the stars of the ’93 season, Doug Henry and Jeff Emig. And a really, really young star was born at High Point when 16-year-old pro-am rider Kevin Windham led most of the way before Henry pulled off a late-race pass. Yes, lots of talent in this class, but by the halfway point of the series, Henry’s consistent teammate Steve Lamson was leading them all in the standings.

Emig, now in his fifth year as a pro, really did not want to be in the 125 class at this point, and though he won a couple rounds early, his chase for a second title in this class was done after a big crash at Kenworthys left him with a concussion.

Henry was dealing with a strange stomach ailment for most of the season that really hurt his performance, so he started getting IVs between motos. The competition wasn’t happy, and the AMA passed a new rule that still stands today: if you get an IV between motos, you’re out for the day. However, Henry began to recover from his illness and mounted a late-season charge to claim the championship for the second straight year. But his season ended on an awkward note as he and Splitfire/Pro Circuit Kawasaki's Ryan Hughes brawled on the track at Steel City in the final moto! 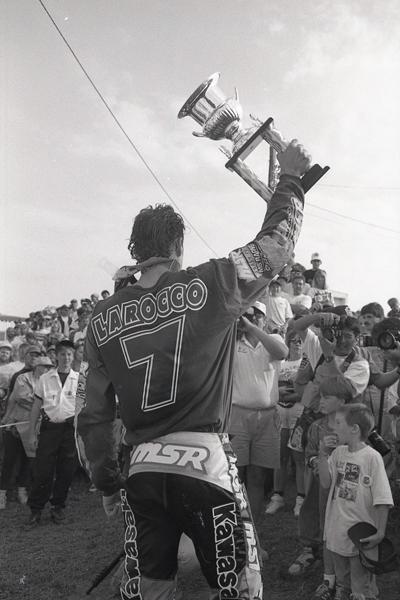 With the new TV package and new stars in the making, things were looking up for American motocross in 1994. Until September. First, that's where a new sanctioning body named “AIR” was announced that was actually the AMA Supercross promoters thinking about breaking off from the AMA after they couldn't come to terms on a new contract. It only lasted a couple of months, but it served as a precursor to problems to come a few years down the road.

Then, in one of the most shocking days in the history of the sport, an unheralded British squad of Rob Herring, Paul Malin, and Kurt Nicoll ended Team USA’s thirteen-year MXdN win streak in Roggenburg, Switzerland. The team of Emig, LaRocco, and Kiedrowski rode well but not well enough. The Brits were led by Malin’s miraculous triumph on a 125, as the career journeyman beat Emig and Stefan Everts to win his class. 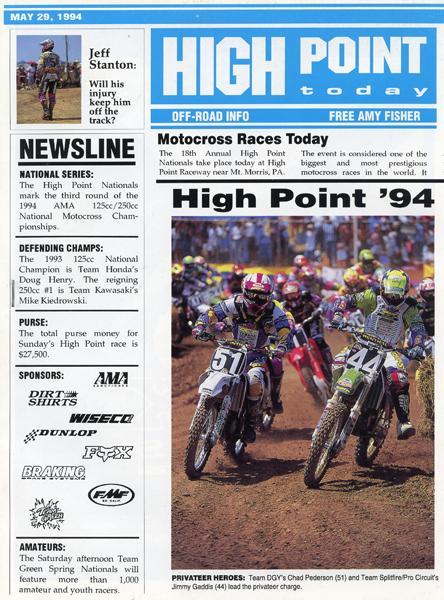 Beyond that, Bob Moore finally achieved the world title he’d been chasing since 1986 in Europe, taking the 125cc Grand Prix Championship. No American rider has won an FIM World Motocross title since. And the winner of the 250cc USGP that year at Budds Creek was Yves Demaria from France.

While international success had proven elusive for the Americans for the first time since 1981, the U.S. was still becoming the place where international talent wanted to move. For 1995, three-time world champion Greg Albertyn announced his intention to move to the U.S. and pursue championships like Jean-Michel Bayle had done, as did French prospect Mickael Pichon. And we will tell you more about both in tomorrow's episode of Racer X Online's 40-Day Countdown to Hangtown! 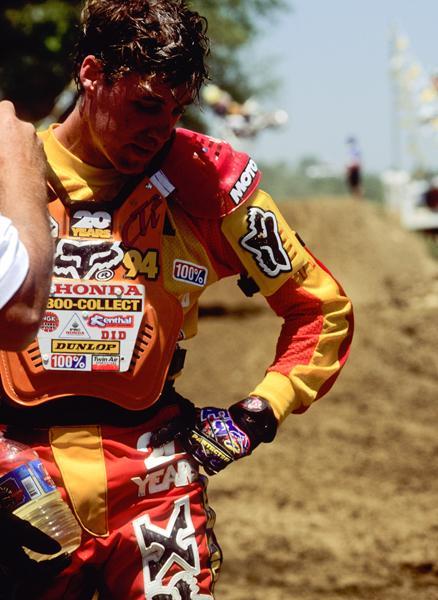 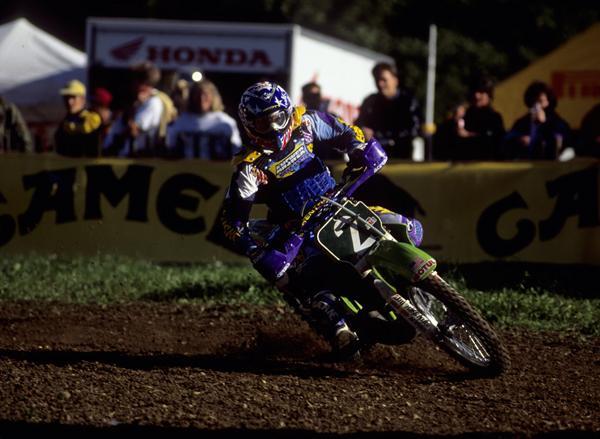 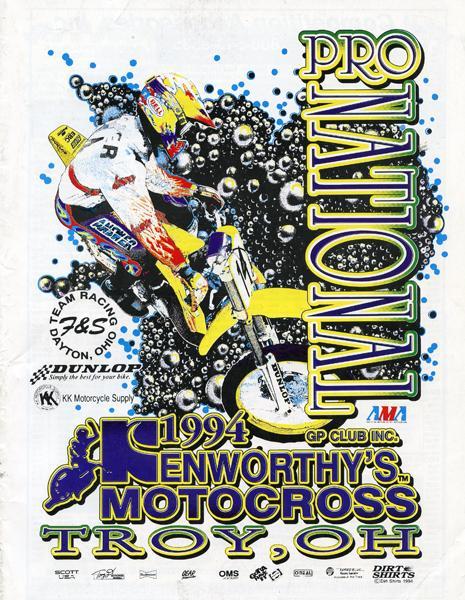 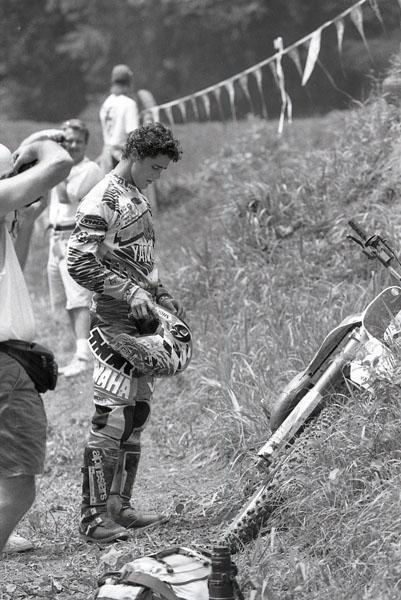 Jeff Emig after getting concussed in a gnarly crash at Kenworthy's.
Photo: Davey Coombs