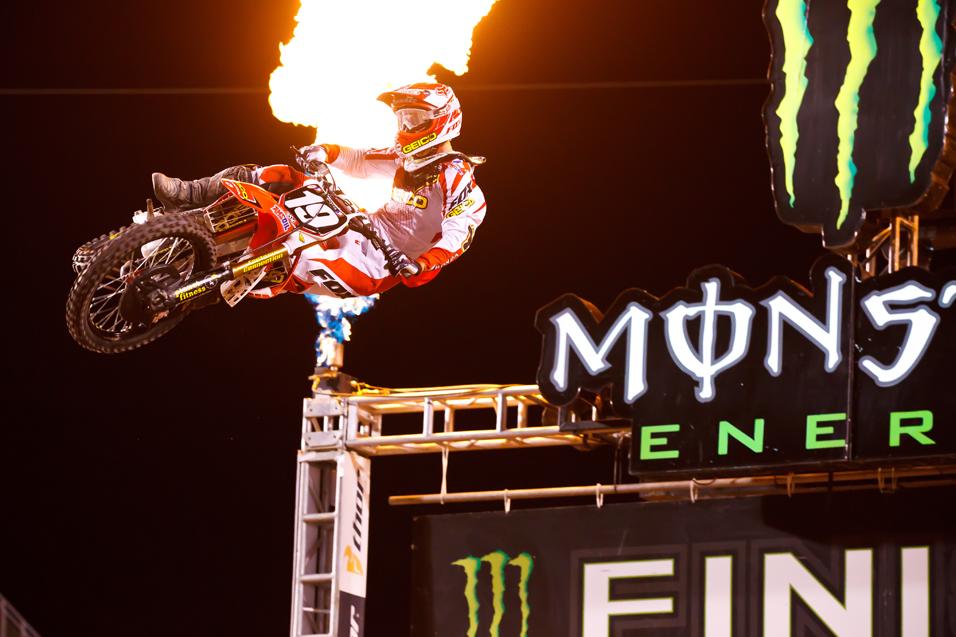 GEICO Honda’s Eli Tomac is on quite a roll these days. The first year West Region Lites supercross racer started off a little rough but he’s been on fire for a while now. Not even the long break for the east series could cool him off as he’s reeled off a couple of podiums, won this past weekend’s Salt Lake City main event, and is now down to a winner-take-all position in Las Vegas this weekend. Tomac and Pro Circuit’s Broc Tickle are going down to the wire for the right to wear the number one plate.  We caught up to the friendly Colorado kid after the race to get his take on things.

Racer X Online: Eli, great ride tonight, can you tell us all about it?
Eli Tomac: Yeah it was good, off the start I kind of snuck around the inside of the second corner to get the holeshot, I didn’t have it in the first turn but that’s how I came out ahead. After that, (Josh) Hansen tried to run it in on me and I tried to keep that corner tight because I knew he was going to try and bomb it in on me. But he did it anyway and I almost think that he didn’t think I was going to go that tight. Anyways, we made contact and he went down. From there I had a few close moments- I cased the triple bad- that was a little gnarly.

And I was framing that step off after that jump-on in that one rhythm section and that was a little sketchy (laughs) but I guess it was enough to stay up front. 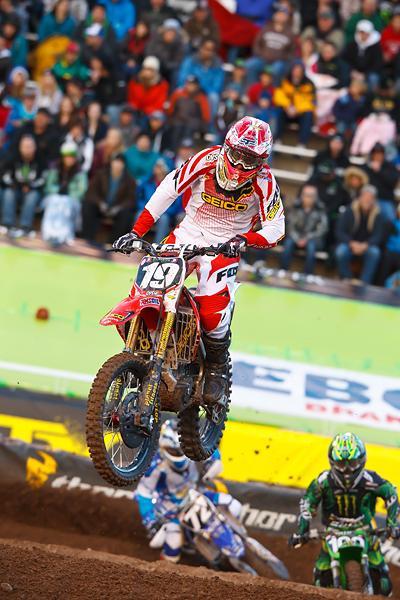 After his win in Salt Lake City, Tomac now finds himself in a winner-take-all position heading into Vegas.
Photo: Simon Cudby

Yeah, you had some scary moments out there, what was the deal?
I was a little tight in the heat race and the main and I wasn’t riding like I was in practice. But it got the job done so I’ll just smooth out for Vegas.

What did you think of the track?
It was technical, the berms started getting blown out and you had to hit your marks. That’s what happened when I cased that triple, I came out of the turn and my back end went away and I didn’t get the drive I needed. Then I cased it, it definitely didn’t allow for mistakes.

Almost a little outdoor-ish?
Yeah, it was powdery and blown out in the turns and I kind of was working the drifting a little bit. 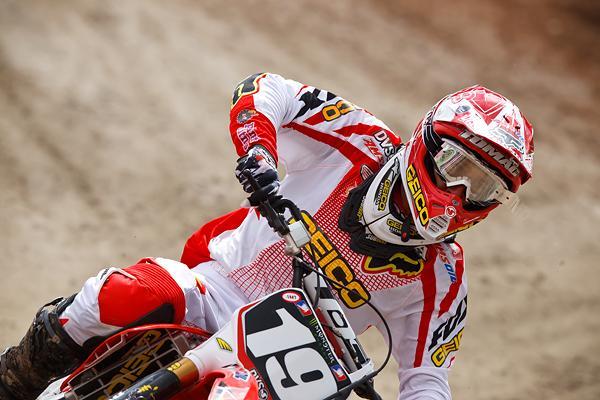 After a slow start to the season the rookie has been one of the hottest riders on the circuit.
Photo: Simon Cudby

How much did you ride motocross during the break and do you think it helped you?
I’ve been doing about two days supercross and one day outdoor right now, I got one test session in and the bike is handling great and I’m looking forward to outdoors.

So Vegas this weekend, you’re coming right out of practice and into the main event, have you thought much about that?
(Laughs) Yeah for sure. It’s nice to know that I kind of control my destiny now. There are two points between us and I don’t need anyone to get in-between us or anything like that. So that’s nice and it’s cool that I have a legit shot of winning.