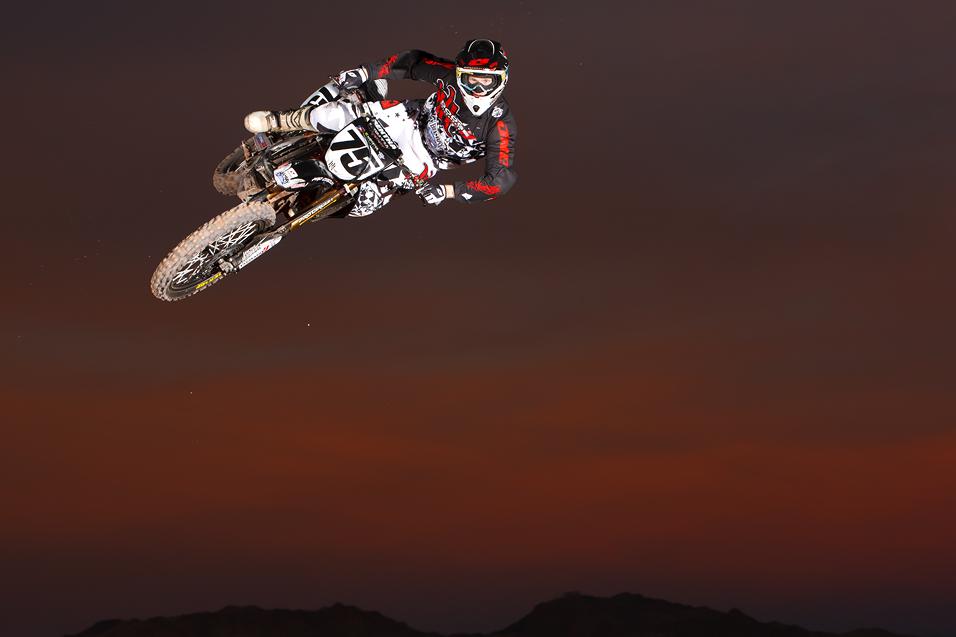 Advertisement | Advertise with Us
Rice-eccles Stadium Salt Lake City, UT Salt Lake City Monster Energy AMA Supercross Championship
Just 15 months ago, Josh Hill was tied for the supercross points lead with Ryan Dungey. Since then his career has spiraled downhill, as Josh broke his leg last summer attempting to backflip. As he fights through his recovery from the injury, he’s become a fan instead of a participant. We rang him up to get an injury update, and his take on the 2011 season.

Racer X Online: How’s the injury.
Josh Hill: It’s coming along. I just had a nerve conduction test and it says everything is good in there, everything is still working. It’s all really dull, but it’s going to come back. But I have had a little set back, I was walking around so much at the races and all, with the nerve damage, that I ended up getting these pressure sores on my foot. So I have been back on crutches for a month.

So the broken femur is okay. The nerves are the big issue?
Yeah, if I didn’t have this freak problem with my other leg, the broken bone is so strong in the other one that I would probably have been racing the fifth round of supercross. But now I’m hoping around all day on the leg I broke—the leg that had the broken femur is actually my good leg now. I just have to let these sores heal up, and I’m in the final stages of that. It’s just more of a pain in the butt than anything—I just need to be on crutches. It’s a month long hang up. 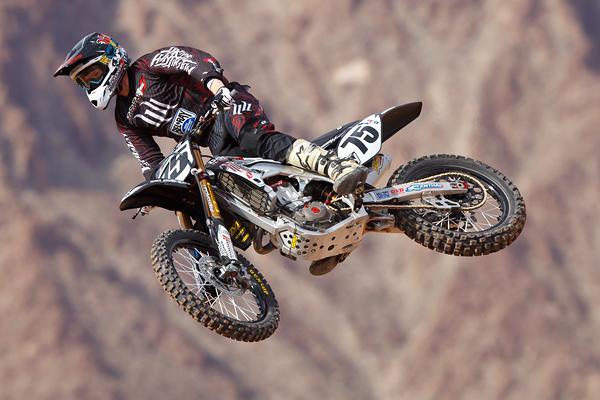 It's been a long road for Hill to climb since his crash last summer.
Photo: Simon Cudby

So what led to all of these problems in the other leg?
I got hurt at Nate Adam’s house and they rushed me to the hospital. I couldn’t get hold of anyone to do the surgery, so they just got the first emergency room guy they had. It ended up going really bad—my girlfriend says I had four blood transfusions, and then I started having all of these problems with my left leg. I didn’t do anything to the left leg—I just started getting compartment syndrome out of nowhere. That leg was fine the first two or three days, and I ended up having to go right back in for more surgery. Now it’s a matter of waiting for the foot to stretch out and the nerves to rebuild in that leg.

So the one leg wasn’t supposed to be a problem at all, but then it turned bad?
Yeah! It could have been from hitting the ground hard, and that’s what they say caused the compartment syndrome, but that leg was fine for the first few days. Everyone else who has this complains about the pain way sooner. I had no pain at all in my left leg for a few days. It’s just a bad deal, I wish I could have left that hospital and gotten better treatment, but they wouldn’t let me leave. It was just a nightmare. At first, when people came in to see me, I was not even that bad, I was just sitting there chilling with a broken femur in my right leg, thinking it would be a two month deal. Then after a few days is when it started to turn really bad. Luckily Dr. Alexander came in from Murreitta and he fixed me back up. He really saved me, he re-did my leg, fixed my leg and fixed my shoulder. The first doctor had so many problems with my leg, he couldn’t even get to the shoulder. So now it’s just damage control and trying to fix the things that went bad in the hospital. I’ve got so many little issues, I could just go on for days. Just been a nightmare of little things, and that’s why I’m not back on a bike yet. I’m sure people saw me walking around at the first few races, then now I’m back on crutches. It’s just a quick thing because of the pressure sores. 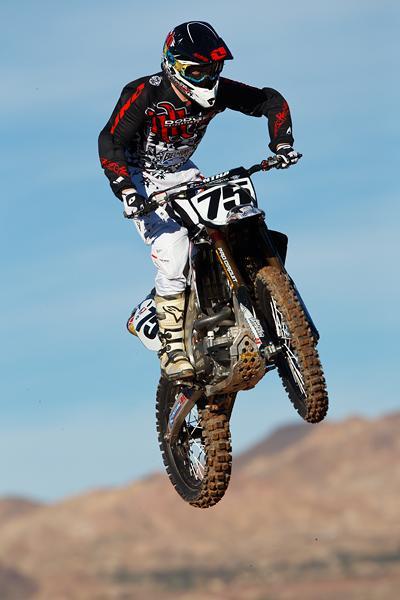 Expect Hill to be back with the Dodge/Hart and Huntington squad come 2012.
Photo: Simon Cudby

So when you signed with this team, the plan was to race?
This year was going to be a lot of signing autographs, because before I signed with them I knew how bad this compartment syndrome would be. I knew there was a good chance I wouldn’t race this year.

But the dream is still alive for the future.
Oh yeah! I definitely will be back racing. I just have to get this foot stretched out, and I’ve been working on things with my neurologist, and I think I could be back as soon as a month. I have this custom orthodic brace getting made that will help stretch out my leg, and I’ll be sitting here for a week or ten days working on that and getting this pressure sore to heal up. I’m going to try to get an advanced copy of MX vs ATV Alive, because I’ll be here on the couch for a week or ten days. Then I should be ready to get back on a road bike and back on a dirt bike. I’ve got exciting stuff coming up, I just need to take care of it all in the right order.

It has been a crazy year of racing. Does that bum you out, because you would want to be in there, or is this just exciting to watch?
I obviously wish I could race, and I think if I hadn’t gotten hurt I’d be in the mix and all that, but this year I’m looking at it like a fan. I’ve got my favorite riders because they’re my friends, but I think my taste has changed just because I’m watching it on the couch. When the race isn’t on live on Saturday, I just shut myself off from the internet and watch it on TV on Sunday like it’s live. I’m just like a normal fan right now—except that I can’t ride. I don’t think I could ever be one of those guys who just disappears from the sport. I just like it too much. Even if I can’t race, and even if I can’t be involved, I’d still be at home watching with my friends.

Can you even pick a favorite to win over these last two races?
I don’t even know! I mean, I’m definitely rooting for Stewart, he’s a good guy, but I can’t say I’m only rooting for him. I’m also rooting for Reed, I think he’s a cool guy, too, and I’m pumped with what he’s doing for his first year with a new team. But Stewart, if he comes all the way back, he deserves to win it. I’d like to see him win. But then you have Villopoto coming off of his injury, which is cool, but lately all of a sudden I’ve found myself rooting for Dungey. You know, a lot of people were saying it was a fluke last year, but he’s coming on strong lately and it would be cool to see him win it to. I don’t know! They all deserve it. Based on the way things have gone down, though, but if Stewart won, I’d probably be the most pumped, because a lot of people were rooting against him. I’m rooting for him. 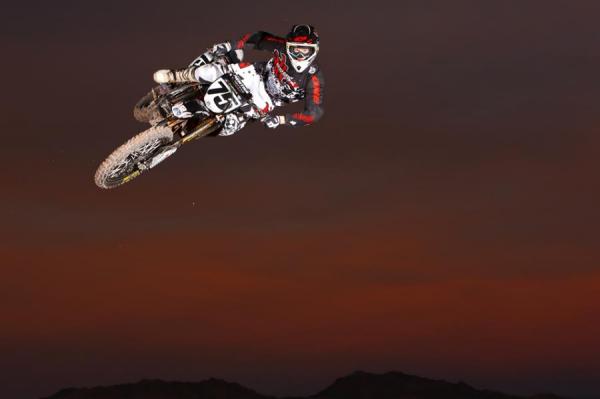 Hill is doing everything possible to get back on the bike.
Photo: Simon Cudby

So yeah, I’m sure you have your personal issues with some of these guys when you’re racing them, but now you’re just talking like a fan.
Yeah. From a totally non-biased standpoint, they deserve respect. All I can do is sit here on the coach and watch, and every weekend I feel like I’m rooting for a new guy.

Can you see a difference from last year, when you where there racing, and what you’re seeing this year?
Not really. I don’t think Dungey has stepped up, and Villopoto looks like he picked up right where he left off last year before he got hurt in St. Louis. So I think they’re where they were last year. Reed and Stewart, having those guys back, it’s gnarly, because you can tell both of those guys want it so bad. It’s hard to put it into words—everyone deserves it.  Like, when Villopoto won Anaheim 1, coming off of that broken leg, it gave me goosebumps! Dungey had a DNF and seemed off the pace at the beginning of the year, and I think it’s cool to see him pull through. I just don’t even know. What was the question? I’m just getting all pumped up thinking of how gnarly this series is!

Well that’s cool. Anyone you want to thank?
It’s pretty cool that Dragon and DC have stayed behind me, and for the Dodge Hart and Huntington team to step up and sponsor me while I’m hurt, it’s made it easier. I haven’t had to wake up and stress on bills, I can just wake up and think about getting stronger every day and getting back on my dirt bike. I can’t thank those guys enough. And my girlfriend Randi. She stuck it out there all 18 days in the hospital. Without her I would really be down.

(How tough is Josh’s recovery? Check out a video DC Shoes put together here to see Josh refusing to lose)