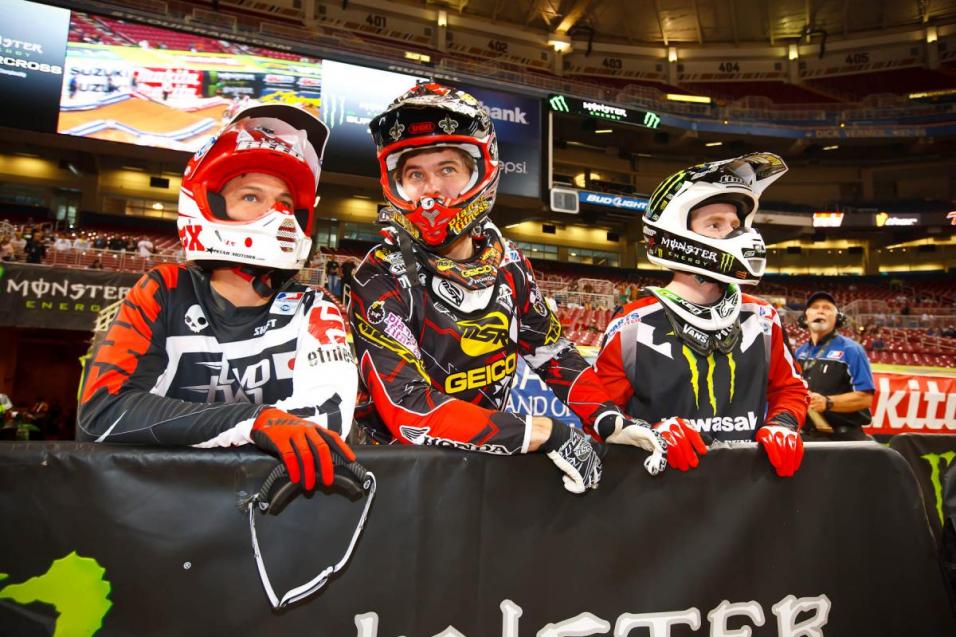 We've got timed laps in the books here in St. Louis.

In the 250 class, Ryan Sipes and Dean Wilson looked like they were in a race on the first lap, stealing lines from each other and challenging as if they were battling for the lead. Sipes' early lap was fastest, but soon Justin Barcia moved into the top spot. Wilson later logged a 49.19 to lead the field, but Sipes came back with a 49.14 to lead the session when the checkers came out. Barcia (50.2) Matt Lemoine (50.60) and Blake Baggett (50.62) rounded out the top five.

Trey Canard was the first 450 bike out in timed practice, but Austin Stroupe was treating this like the Lites A class at Loretta's in 2007, where he and Canard duked it out for a title. Stroupe jumped everything immediately and logged the fastest first lap. Canard and Ryan Dungey would later take that spot away, then Chad Reed and Ryan Villopoto got in the mix, too.They were all exchanging fast 49 second laps.

After a few slower laps, James Stewart grabbed a handfull and went into the 47s! Then he went even fastest the next time around, logging a 47.6, a time no one could touch. Dungey went 48.7 and RV had a 48.9. Then, Villopto went down hard in the whoops and got up slowly. The series leader stayed on the ground for about 30 seconds, until finally getting back to his feet, hopping on his bike, picking up his mechanic Mike Williamson and heading back to the pits.