It has been long overdue, but Mount Maunganui’s Cody Cooper has finally clinched that most coveted of New Zealand motocross titles, the senior MX1 crown.

It was not easy, though, and the racing went down to the wire at the fourth and final round of this season’s Demon Energy New Zealand Motocross Championships near New Plymouth on Sunday.

The Suzuki ace from the Bay of Plenty came up just two points short last season, but this time Cooper was not to be denied, even if the field lining up against him this time was tougher than before, one of the strongest ever witnessed on the New Zealand domestic motocross scene.

But Cooper became stronger as the season progressed and eventually won seven of the series’ 12 MX1 races. On Sunday he finished the day unbeaten in three races to snatch the title Coppins’ grasp. 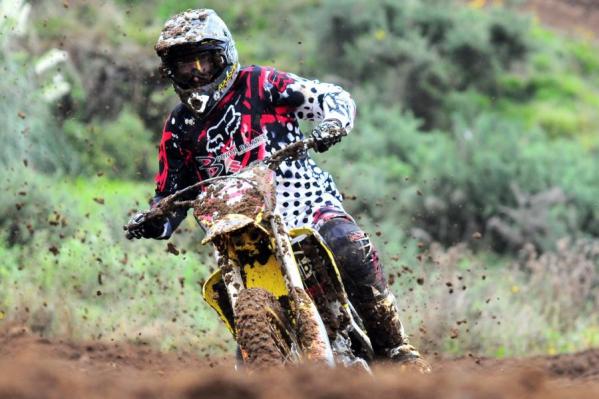 Mount Maunganui’s Cody Cooper (Suzuki), crowned New Zealand MX1 champion for the first time on Sunday.
Photo by Andy McGechan, BikesportNZ.com
Coppins had led after rounds one, two and three but, as has happened so many times in the past, Taranaki’s fourth and final round became something of a graveyard for the championship leader.

An ankle injury sustained while chasing Cooper to the chequered flag in race one on Sunday turned out to be serious enough for Coppins to withdraw before the last race of the day, confirming Cooper as the new champ.

In the MX2 (250cc) class, it was a fairytale finish for Waikato’s Darryll King (Yamaha), the 42-year-old former world championship campaigner, also a multi-time former New Zealand and Australian champion, who had supposedly retired from all levels of competition about three years ago.

“I didn’t think I could do this,” said King. “I was on an old two-stroke bike against some very fast kids of four-strokes but, I suppose, all my Grand Prix experience counted for something.”

McCoy had led the title chase by just one point as the riders lined up for the final MX2 race of the series.

“I was mentally a bit of a mess in that last race, the pressure was on and I needed to finish ahead of Australian visitor Daniel McCoy (Suzuki) to win the title. I have not been in a really tough championship chase in a few years.

“I was leading the race but, on those last two laps, my mind was putting up all sorts of negative thoughts ... I’m going to make a mistake, I’m, going to crash ... and it was hard to shut them out and just concentrate.”

Meanwhile, in the 125cc and under-21 years’ classes, raced concurrently but scored separately, Waitakere’s Ethan Martens (Yamaha) was simply too strong, finishing 3-1-1 on Sunday to easily wrap up both titles.