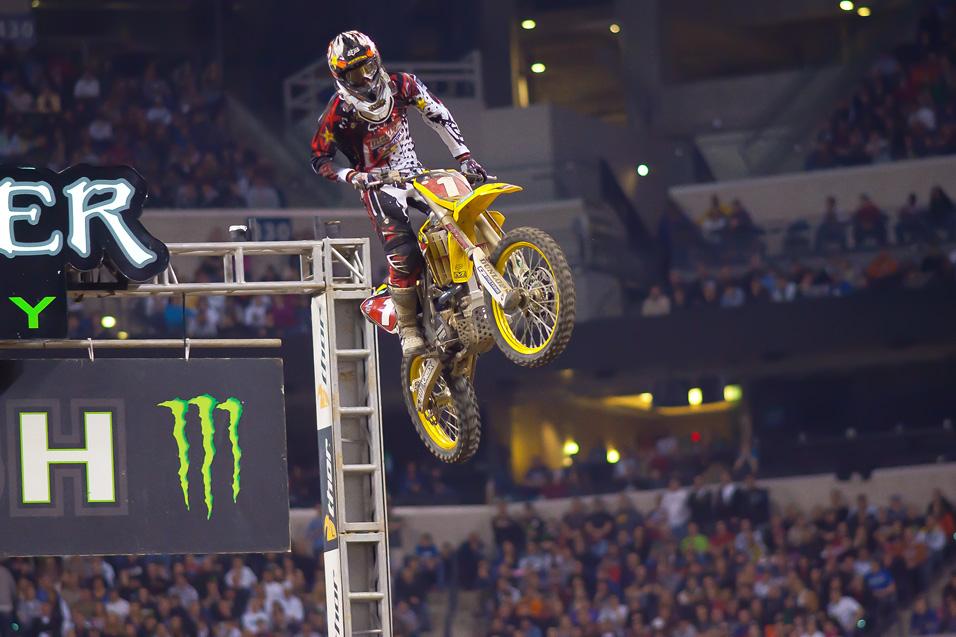 Advertisement | Advertise with Us
Lucas Oil Stadium Indianapolis, IN Indianapolis Monster Energy AMA Supercross Championship
There was a something special about Ryan Dungey’s 2010 Monster Energy Supercross season right from the start—he grabbed the holeshot in the first main event in Anaheim, then run and hid from the field for most of the night. James Stewart, the defending AMA SX Champion at the time, mounted a late run and managed to pass Dungey for the lead, but even then, the Rockstar Makita Suzuki rookie stayed close and nearly passed Stewart back on the final lap.

Dungey was off to a strong start. He carried that momentum, pulling holeshots, winning races, even surviving a wild crash in San Francisco that should have left him limping. He later delivered a championship in supercross, and another in AMA Motocross.

It’s true that this year, Dungey is facing stiffer competition, and his results have not been the same. But it also seems like that magic touch from last year has left him. Regardless of how fast Ryan Villopoto, Stewart and Chad Reed are going, Dungey has also faced the type of bad luck that he seemed impervious to last year. He also hasn’t pulled holeshots like he did early in 2010.

Dungey has been riding well enough, he just seems to lack that little extra something, that knack for being in the right place at the right time like he was so many times last year. You could easily make the case that he’s riding as well, if not better, than Reed and Trey Canard, for example, who both have wins. But this year Canard was in position to snatch one up when Kevin Windham fell in Houston, and Reed snagged one when Canard crashed in San Diego.

Dungey saw another missed opportunity Saturday night in Indy. Sick of waiting and watching the others get the glory, he pushed it early. He bumped Canard and got into third. Then he battled Reed aggressively for second, until he clipped Reed’s rear wheel and went down. “Just a mistake, I didn’t think Reed was going to stop that quickly,” Dungey explained.

It seemed like last year, in a game of inches, Dungey was always on the better side of the scenario. At Red Bud, Dungey moved from third to first when Ben Townley and Reed crashed into each other. At Southwick, Brett Metcalfe ran out of gas while leading Dungey on the last lap. If this were last year, Dungey would have missed Reed’s tire and moved into second. He may have mounted a run at race winner Ryan Villopoto. Instead, fell and lost the chance to build momentum, just like he did last week when he led Villopoto in a heat race, only for his engine to give out.

So far this year, Dungey has not only been unable to catch Villopoto. He’s also not catching the breaks.