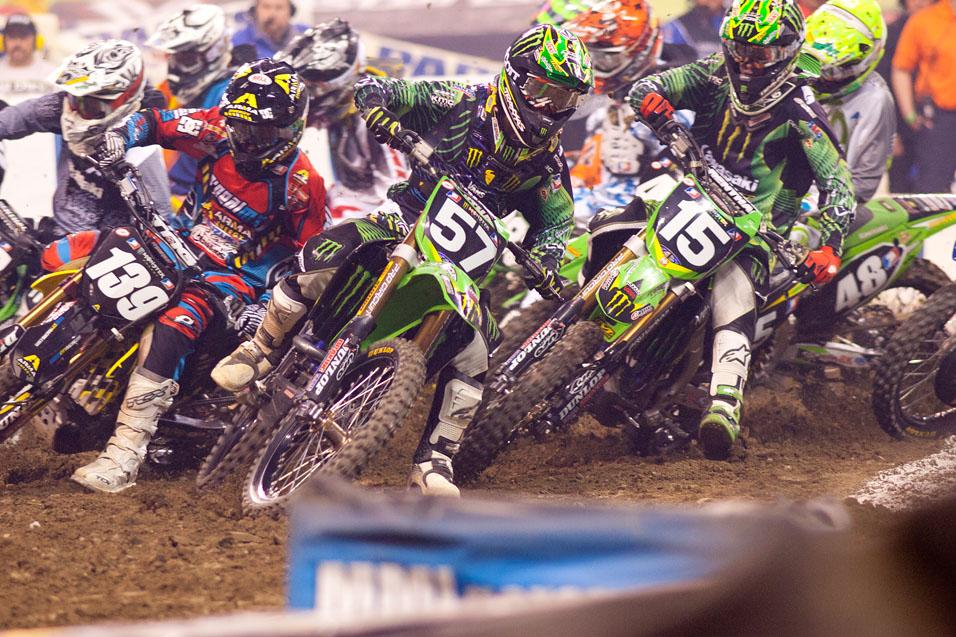 March 12, 2011 8:40pm
by: Jason Weigandt
Lucas Oil Stadium Indianapolis, IN Indianapolis Monster Energy AMA Supercross Championship
Lites Heat 1: Last weekend Blake Baggett and Malcolm Stewart were about to battle in their heat race, until Malcolm crashed. This time The Malc kept it on two wheels and even closed in on Baggett early, but then Baggett put his head down and pulled back out. Bagget has himself another heat win. Main event next?

Lites Heat 2: Yeah so Ryan Sipes is sick of just being the fastest rider in practice every week. He wants to actually win some darned races with all of that speed. So he just goes out and runs down Justin Barcia in this one, pressing him and then going to the inside and taking the lead. Barcia was stuck on the outside, lost the front end and went down. Also Blake Wharton stalled on the last lap and dropped out of qualifying position. He’s getting way too much experience in LCQs.

SX Heat 1: Ryan Villopoto don’t need no stinkin’ gifts, okay? He’s just plain fast. He grabbed the holeshot in this one and fended off Kevin Windham for the win. Davi Millsaps ran third most of the way before Chad Reed made the pass on the last lap. Reedy seems to have a way of not doing anything notable in the heat races or practice, and then suddenly showing up fast for the main. He better be really fast tonight, because RV2 is on it.

SX Heat 2: James Stewart grabbed the holeshot here with Trey Canard right behind him, then Justin Brayton and Ryan Dungey. Stewart pulled away a bit, but everyone on the track made mistakes, so things went back and forth. Late in the race The Dunge pulled up on Brayton but could not make the pass. Stewart, Canard, Brayton and Dungey in this one, Tedesco, Simmonds Byrne, Blose and Boni going to the main—we list their names because we have time.