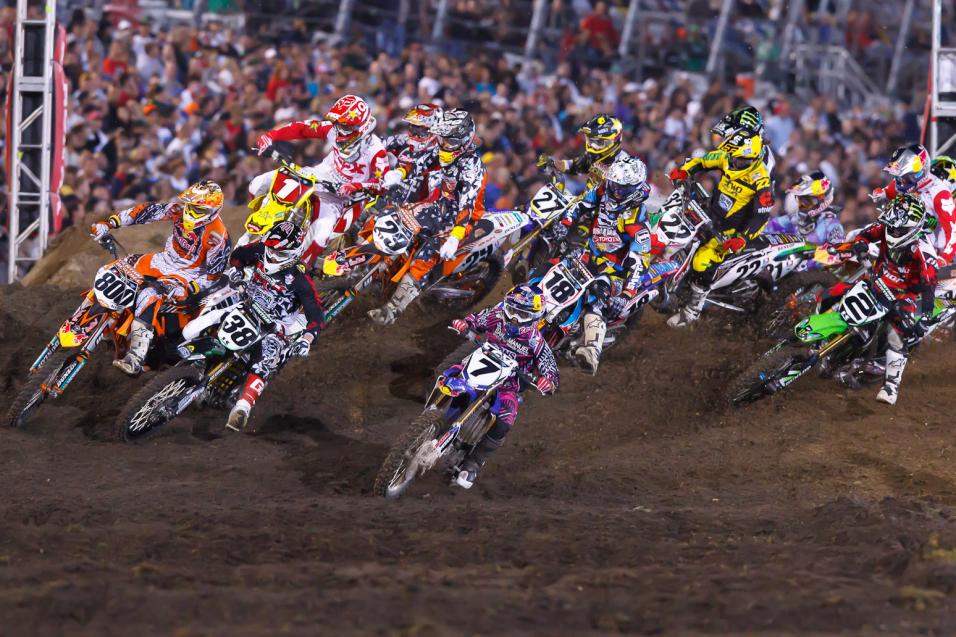 Things are still happening in rapid-fire fashion in AMA Supercross. Each time you think things are going to settle down, the series fires off another quick change. But one thing remains the same--the problems seem to happen around Monster Energy Kawasaki’s Ryan Villopoto, but rarely to him. And after tonight’s Daytona Supercross by Honda, he’s built a big points lead. In rapid-fire fashion.

In Daytona, early, San Manuel Red Bull Yamaha’s James Stewart threatened to make things boring. He grabbed the holeshot and laid down hyper-fast laps, while Villopoto quickly got to second. It would have been reasonable to expect a duel between Stewart and RV, but it didn’t happen, as Stewart just took off. Then, just as quickly as he built the lead, he was off the bike.

All alone, Stewart jumped front-end down on a triple and went over the bars hard on the landing. He hit the deck hard, but his Yamaha landed on its wheels and kept rolling, eventually launching the next triple all by itself. Stewart got up limping, and had a long walk over to his machine. The Asterisk medic crew tried to attend to him, but he shook them off and got back into the running in dead last. 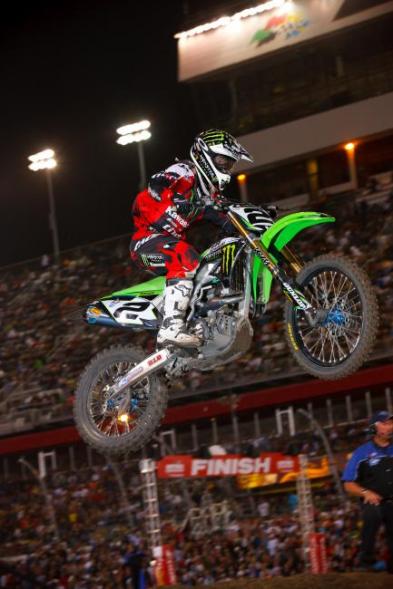 In a wild season, Ryan Villopoto is the first to grab control of supercross.
Simon Cudby photo 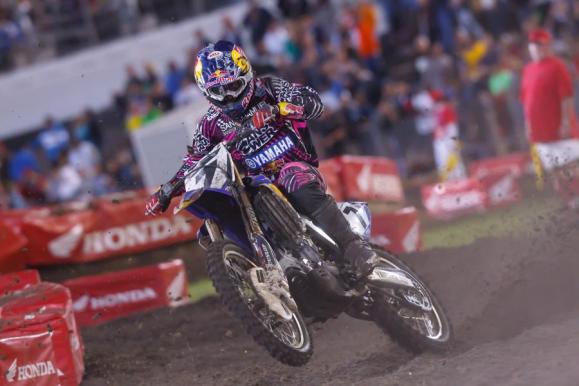 Stewart was on the gas early and late, but a bump in the road cost him a bunch of points.
Simon Cudby photo

Once Villopoto had the lead, he would face no other threats. Muscle Milk Toyota JGR’s Davi Millsaps ran second ahead of  Red Bull KTM’s Andrew Short, then Chad Reed caught the gang on his TwoTwo Motorsports Bel-Ray Honda. Later Ryan Dungey caught then, too, leading to a four-rider battle. 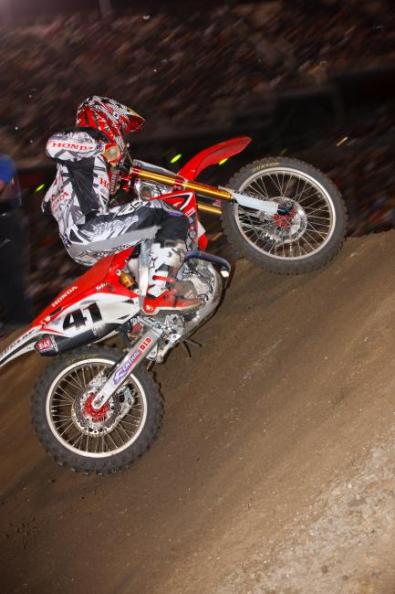 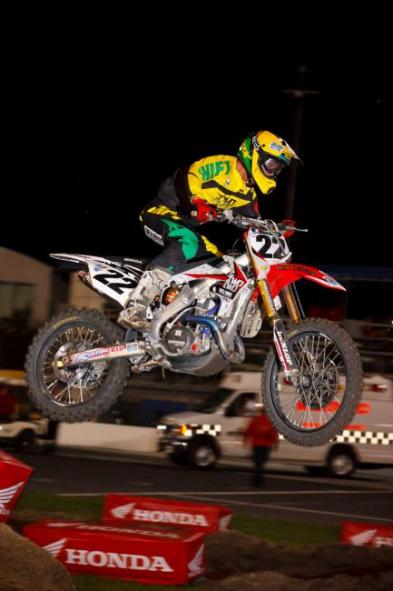 Short had a few mistakes at the mid-point of the race, and Reed and Dungey were able to fight past Millsaps but never make a serious run toward Villopoto. Reed held on for a solid second and move within one point of Stewart for second in the standings.

Rockstar Makita Suzuki’s Dungey survived for third on a rough night. It started well as he fended off Villopoto for the lead in his heat race, but then his bike suddenly let go. Dungey DNFed the heat race and had to qualify through the LCQ, leaving him with a terrible gate pick. He managed a decent start in the main but couldn’t close on Reed or Villopoto down the stretch. 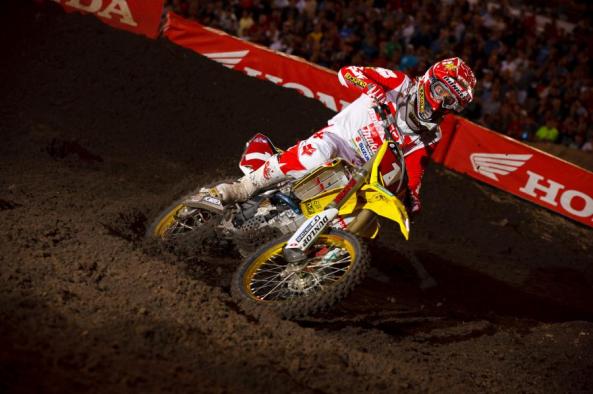 For a few moments in his heat race, it looked like it could be Ryan Dungey's breakthrough night.
Simon Cudby photo

Short mounted a comeback and got past Millsaps for fourth. Millsaps’ teammate Justin Brayton came through next, with GECIO Honda’s Kevin Windham and Red Bull KTM’s Ken Roczen seventh and eighth. Stewart pulled off a miraculous comeback for ninth, he was nearly a lap down when he got going again, but Villopoto never got around him. Mike Alessi rounded out the top ten on another Red Bull KTM.

Honda’s Trey Canard had a rough main event, crashing early, and then getting tangled with Brett Metcalfe when Metty swapped in a rough section. Canard took 13th and Metcalfe 18th.

In SX Lites, Blake Baggett finally capitalized on his early-season speed and delivered a win in dominant fashion. The Monster Energy Pro Circuit Kawasaki rider grabbed the holeshot and checked out early, seemingly never putting a wheel wrong. GEICO Powersports Honda’s Justin Barcia ran second but never mounted a serious challenge to Baggett. Barcia is riding with two broken bones in his wrist after last week's practice crash. Barcia had an early challenge from Ryan Sipes on a DNA Shred Stix Yamaha, but eventually the pack spread out on a track that clearly sapped everyone’s energy. 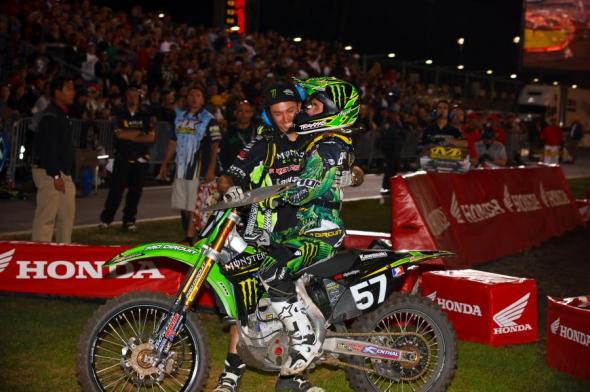 After two podiums in the first two rounds, Baggett went to the box in the top spot this time.
Simon Cudby photo 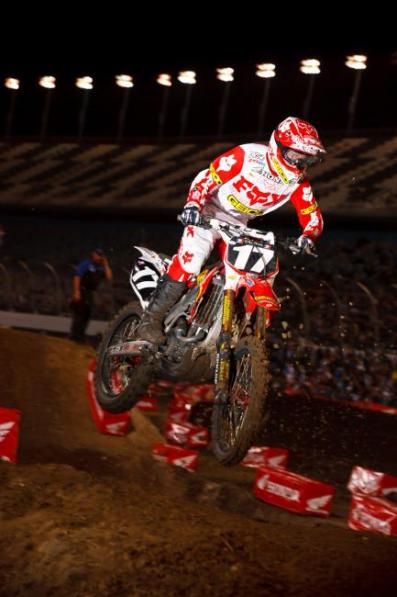 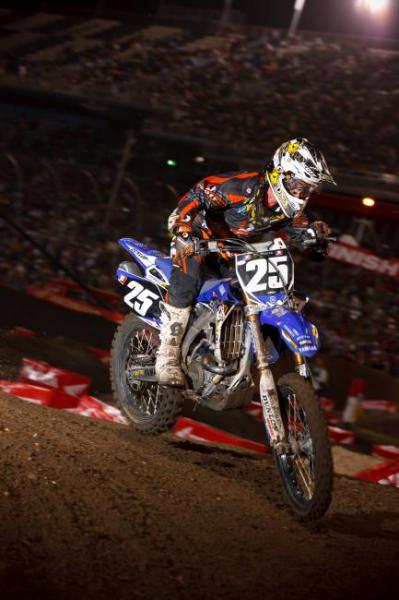 Dean Wilson had a terrible night, crashing early and bending his clutch lever upwards. It took him several laps to pound the lever back into reach, and then he started climbing through the pack and reached eighth. This puts Barcia back into sole possession of the points lead.

The series heads to Indy next weekend, with the field of would-be title contenders needing to rally against Villopoto in the second half of the series.