Racer X: Let’s hear your summary of your season to date.
Chad Johnson: So far so good; I’ve really been working on just staying consistent.  Its Arenacross, so there’s a lot that can happen during the races; there are always fast riders and with the tracks smaller, and lap times shorter lots of things that can change quickly.

You’re back at Team Babbitt’s riding a Kawasaki KXF450 – has much changes since last season?
No, there really haven’t been that many changes with the team since last year.  As you said, we are on the KX450 again, and it’s a great bike – stock it’s awesome.  I have known Team Manager Denny Bartz since I was racing the 80cc class – we get along very well, and he is a huge help with knowing what to do to motivate me.  My mechanic Rob Goodwin does an excellent job in keeping my bike top notch and helping me on the track.

You seem to be friendly with all your competitors in spite of the intensity of arenacross – how do you do it?
Jim; racing is racing; on the track you’re trying to win – teammates or not.  Off the track I just try to enjoy myself; life is way too short to have enemies. 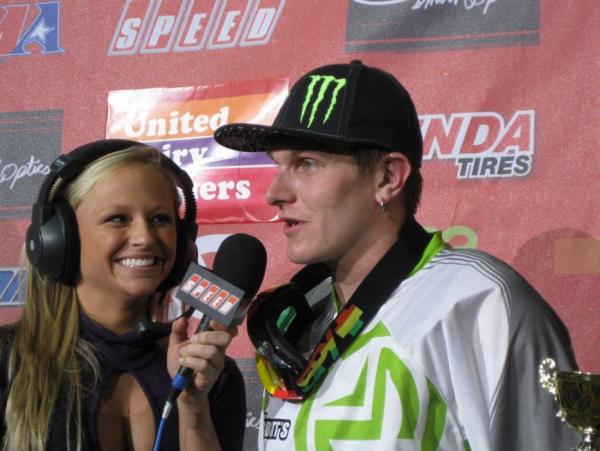 Johnson is having a solid 2011 thus far.
Photo: James Kimball

You’re somewhat of a veteran now with a couple of Championships. What’s your key to success?
I just train hard in the off-season, and I race because I love it – for me it’s just that simple.  Sure, it’s also a job that can make you money, but for me I don’t really look at it that way – I love to ride and I really enjoy the competition aspect of the sport.  In Arenacross it’s all about bike set up, seat time, and finding that right balance of knowing when to go for it, and knowing when to let off.

Aside from being a professional Arenacross racer you are pretty much a normal family guy right?
Yeah, that’s right; I have a very supportive family that truly make racing a lot easier on us all, but all the travelling week after week does take toll after a while.  When the racing season is over I still race a little but, but also work at my parent’s block yard, and hold motocross camps for kids.

Getting back to racing. So now you’re focused on winning another championship; then what?
I would definitely love to get another title for sure; you always want that, but I’m just sticking to what I believe in--which is taking it one race at a time.  As far as the future I’m taking that year by year; as long as I am enjoying racing, I’ll keep doing it.

Wrapping things up Chad, who would you like to thank?
I for sure want to thank my family for all their support; they do so much for me.  Also a big thank you to Babbitt’s, Monster Energy, Kawasaki, Maxxis, Moose, EVS, Shoei, Tex, Spy, Vortex, Works Connection, and anyone that I missed!