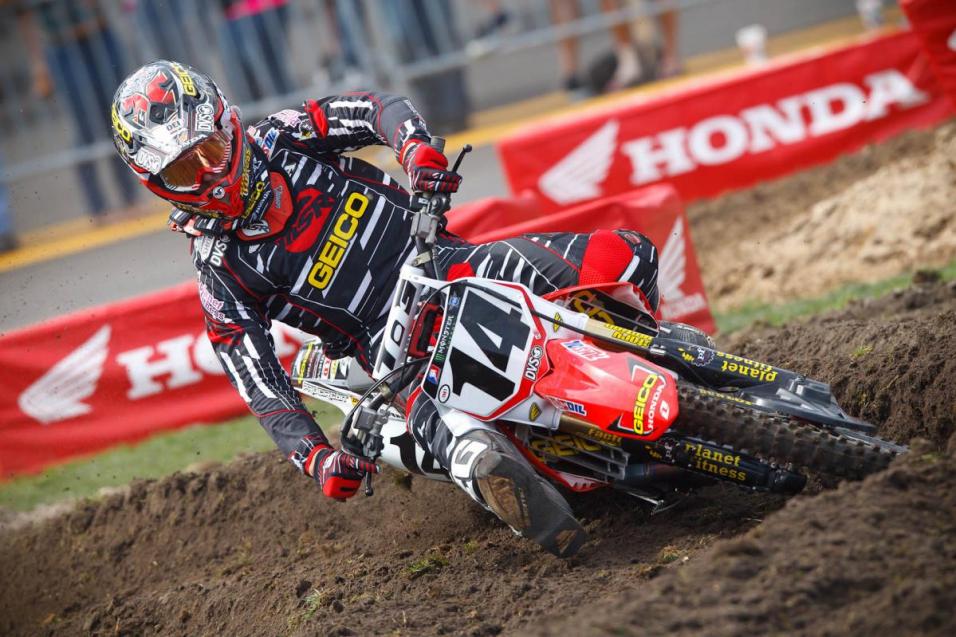 March 5, 2011 5:55pm
by: Jason Weigandt
Daytona International Speedway Daytona, FL Daytona Monster Energy AMA Supercross Championship
Practice is complete here at Daytona. The track is gnarly and the lap times are long, so speed may not trump endurance or even strategy tonight—going all out in a full sprint for 25 minutes on this track may not work.

With that said, surely the practice times will indicate something. So here they are:

In the first practice session for the seeded Lites riders, Dean Wilson was flying through the second, higher-speed whoop section and making up big time. He logged a flying lap a fill second faster than anyone else, with a 1:18.222, compared to his teammate, Blake Baggett, who was second fastest with a 1:19.413. Nico Izzi was third fastest with a 1:19.976. Izzi caught some attention by jumping off of a small bump and clearing a gap no one else did, and surely he made up some time there. Justin Barcia was next followed by Matt Lemoine, Ryan Sipes, PJ Larsen, Jason Anderson, Ian Trettel and Hunter Hewitt.

Earlier in the day, Barcia admitted he’s riding with two broken bones in his wrist. It clearly isn’t hurting him that much, because he went old-school Barcia in the second practice, revving his bike like a madman and throwing it upside down on every jump. On that crazy lap, he logged a 1:18.143, fastest of the session and just a hundreth away from Wilson’s lap from session two. Wilson took second with a 1:18.600, Izzi was third time with a 1:18.718, followed by Baggett with a 1:19.183, and then came Sipes, Malcolm Stewart, Lemoine, Wharton, Anderson and Hunter Hewitt.

So far it looks like a Barcia and Wilson battle shaping up, which may not be a surprise. Remember that endurance may mean just as much as speed on this track, though.

In session two, Stewart never really put in a fast lap, perhaps knowing that as the track gets rougher, his fast time from session one was going to hold out as the fastest overall, anyway. The plan worked, because Ryan Villopoto topped everyone with a 1:16.531, which was fast, but three tenths off of Stewart’s best from the first session. Stewart ended up a whopping 23rd in that session after cruising around. However, he did calmly hop over the wall jump, the same area Izzi dialed in during the Lites, just with a different rhythm.

Reed’s 1:16.882 was second fastest in the second session. Normally, both Reed and RV save their best laps for the actual night show, so their fast qualifying efforts indicate they’re on the gas tonight.

Stay tuned for racing tonight, live on SPEED, and live via our twitter updates, @racerxonline